The highlight race of the opening weekend of the 2009 Saratoga Race Course meeting is the $500,000 Jim Dandy Stakes (G2), a 1 1/8 mile trip over the main track for 3-year-olds and the major local prep for the Travers Stakes to be run August 29. After Miner's Escape scratched out of the race, just six went to post before 33,954 fans on a sunny Saturday afternoon. Peter Pan Stakes winner Charitable Man was sent off as the 7-5 favorite exiting a distant fourth place finish in the Belmont Stakes. In to challenge him included two horses each at 5-2, Kensei, winner of the Dwyer Stakes at Belmont, and Warrior's Reward, who was third in the Dwyer behind Kensei after finishing a close second in the Northern Dancer at Churchill Downs.

Jockey Calvin Borel sent Warrior's Reward to the front and he set a pace of 23.43 and 47.50 around the clubhouse turn and down the backstretch with Kensei stalking him a length behind and to his outside. On the turn, Kensei moved alongside the pacesetter to challenge, poking a head in front through 3/4 in 1:11.55. Jockey Edgar Prado asked Kensei to pull away and he did, widening his advantage through the stretch to win by 2 1/4 lengths in 1:47.90 over the fast track. Warrior's Reward was all out to hold off the late-running favorite Charitable Man for second money. 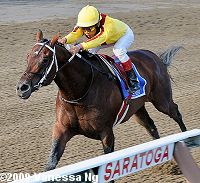 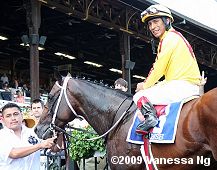 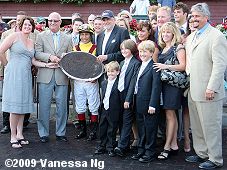 Left: Kensei and jockey Edgar Prado in the winner's circle.

Right: The trophy presentation with owner Jess Jackson to the right of jockey Edgar Prado and trainer Steve Asmussen on the far right. Asmussen said, "When the horse won the Dwyer in such an impressive fashion, this became a target for us. We're glad to be on Kensei's side. He's a beautiful horse; he was very composed today with the crowd. For him to perform as he did on the highest stage speaks a great deal to his class." Asked if Rachel Alexandra would take on Kensei in the Travers, he added, "That would be very improbable, but I am speaking out of turn." 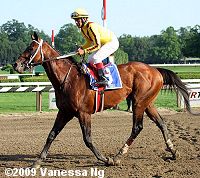 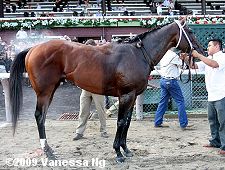 Left: Kensei returns after the race. If you click for the large version, you can see the nasty bleeding cut on his right hind leg that he got during the start. A close-up is here.

Right: Kensei gets hosed off after the race. His jockey Edgar Prado said, "He came out of the gate very well and then he got real keen the first part of the race. When I asked him, he responded. He's been training really sharp up here. I really liked him last time I rode him, and I really liked him today, too." 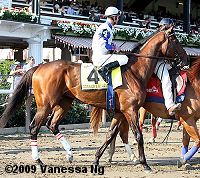 Second place finisher Warrior's Reward in the post parade. His trainer Ian Wilkes said, "He was sharp; we were second best. Now, we have to look ahead at the next step with him. If he comes out fine, I'll go ahead (to the Travers). I was pleased. This horse could have folded easily. He could have finished third or fourth. The other two had a chance to beat him; he fought them off. We're closing in on (Kensei). We got beaten 5 1/2 lengths last time. We might have been beaten 2 lengths this time. We'll catch him." Jockey Calvin Borel added, "I like this colt. I think he'll be alright. He's still learning. He'll run all the way. I wanted to get something out of him today. We're still trying to figure out this horse. We're trying to get him to go long. I know he can do it. His last race threw me off guard when he stumbled. That was supposed to be the prep race for this. I know he'll finish, regardless where you put him." 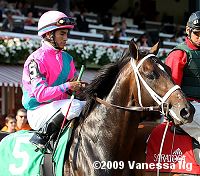 Third place finisher and beaten favorite Charitable Man heads out for the post parade. His trainer Kiaran McLaughlin said, "We had kind of a rough trip, and he finished third. It's a prep for the Travers. We'll see how he comes out of it."

On to the Diana and Lake Luzerne Stakes