At Belmont Park on Saturday, 101,864 cheering fans braved the very wet and chilly conditions to watch as Funny Cide made his attempt to win the Grade 1 Belmont Stakes and become racing’s 12th Triple Crown winner. The crowd was just short of last year’s record of 103,222, a record that could have been toppled easily with nicer weather. The track was listed as fast for the first few races but as the rains continued through the day, the track was downgraded to sloppy. Adding to the atmosphere of the day were the local connections of Funny Cide, a New York-bred gelding owned by a partnership of former high school friends from upstate. His name was chanted by many in the stands as he came out of the tunnel and onto the track for the post parade. Ironically, Empire Maker was once touted as a possible Triple Crown winner after his win over Funny Cide in the Wood Memorial, but Funny Cide turned the tables on him at the Derby. "Round Three" of the rivalry had Empire Maker playing the spoiler role instead.

As expected, Funny Cide was sent off as the even money favorite in the field of six three-year-olds, with Kentucky Derby runner-up Empire Maker the second choice at 2-1. The field all got away from the gate well at 6:40 PM local time, with Empire Maker out of the inside post sharpest of all. However, Jerry Bailey took him to the outside and allowed Funny Cide through on the rail to set the early pace. Unlike his usual stalking style which he used at the Derby and Preakness, Funny Cide was loose on the lead, getting the quarter in 23.85, the half in 48.70, six furlongs in 1:13.51, and a mile in 1:38.05. Empire Maker played the stalker role this time, staying to the outside within a length of the leader.

Turning for home, Bailey asked Empire Maker for his run and got it. Empire Maker surged to the front at the apex of the far turn. He and Funny Cide battled it out early in the stretch drive, with Empire Maker shaking him off as they straightened for home, getting the 1 1/4 miles in 2:02.62. By this time, the brisk early speed on the front had taken its toll on Funny Cide. With a furlong to go, Ten Most Wanted, who also ran a stalking trip back in fifth place early, passed the favorite and went on to finish second. Empire Maker opened a 1 1/2 length lead at the 1/8 pole and easily held off Ten Most Wanted inside the final 1/16, for a 3/4 length victory in a time of 2:28.26, very respectable given the very wet track. It was another 4 1/4 lengths back to Funny Cide in third, who was 5 1/4 lengths clear of fourth place finisher Dynever 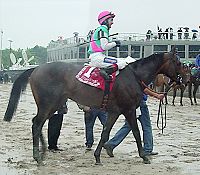 Empire Maker comes back after winning the Belmont. Winning jockey Jerry Bailey said, "I thought he was the best horse going into the race and he proved it today. As soon as I saw Funny Cide getting a little rank I eased back and moved outside. When I turned up the backstretch Funny Cide was really rank and my horse was relaxed. That is what you want going a mile and a half." 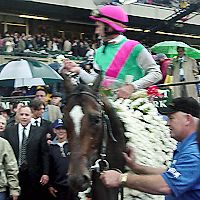 Empire Maker in the winner's circle. Dr. John Chandler, representative for Juddmonte, when asked how it feels to win the Belmont said: "It's absolutely marvelous. We tried a couple of years ago with Aptitude and got beaten. We thought we'd have a pretty good shot this year. Bobby was extremely confident throughout and he was right and it feels absolutely marvelous. It's been a long time. As much people will be aware, most of our horses have been good horses on the grass and it's finally good to have an absolutely outstanding dirt horse. We've had one or two before, but nothing at this age of this caliber, very exciting." 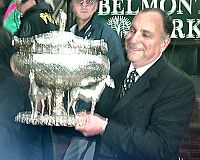 Bobby Frankel with the Belmont trophy. He said, "I was just worried about him pulling up. But when [Ten Most Wanted] came to him, he took off again. It’s vindication." When asked if he was relieved to finally win a Triple Crown race, Frankel said: "Not really. This was another race. It was a great race. I really wanted to win it, but more so for the horse cause the press, you know, they get down on horses, and I thought, let me get him back on top again, so if he won this race, we're all witness to what a great horse he is." 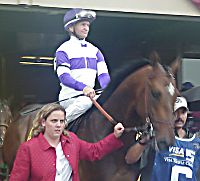 Second place finisher Ten Most Wanted. His jockey Pat Day said, "We just came up a little bit short and got outrun. I just followed Jerry [Bailey] throughout the race and decided to make my move when I saw his horse go. When we couldn’t go by him in the stretch I knew we were going to run out of time. The colt did everything I asked him to do and he gave me 100 percent." 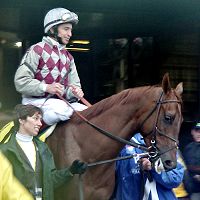 Third place finisher Funny Cide. His jockey Jose Santos said, "I am very proud for all the New Yorkers, Spanish people and New York-bred people who came out to support this horse today. I am so thankful for everybody’s support. I am not disappointed. The track affected him, he didn’t handle it good. I still think I have the best 3-year- old. We will be back. I can’t wait for Funny Cide and Empire Maker to meet again, it will be a great rematch." Trainer Barclay Tagg said, "I feel bad for all the people who came out. We had a good first quarter, 48 then 1:13 and change (for the half) was a sensible pace. I don’t know if it was the extra Ľ mile. He looks all right. We were beaten by a good horse. I don’t know what else to say. I am being honest. It is horse racing."