Although all eyes of the racing world are on Belmont Park this weekend for Saturday's Belmont Stakes and Funny Cide's quest for the elusive Triple Crown, the fillies had their day in the sun on Friday in the Acorn Stakes. The Acorn, a Grade 1 event for 3-year-old fillies going a mile over the main track for a $250,000 purse, attracted last year's champion 2-year-old filly and Breeders' Cup Juvenile Fillies winner Storm Flag Flying, and Kentucky Oaks winner Bird Town. Storm Flag Flying was sent off as the 8-5 favorite, with Bird Town the second choice at just over 5-2.

14-1 longshot Randaroo was sharpest out of the gate and led the field after the first 1/4 mile in 23.41, with Bird Town challenging her to the outside. Bird Town assumed the lead soon after and led the procession through a 1/2 in 46.35 and 3/4 in 1:10.40. By this time Randaroo, who had continued the duel most of the way around, tired badly and faded to an eventual fifth place finish. 3-1 third choice Lady Tak, who was unhurried early, advanced three wide entering the stretch under jockey Jerry Bailey and made her rush towards the favorite. However, she was no match for Bird Town, who held off the late charge of Lady Tak to get the win by a head in a time of 1:35.29 over the fast but drying-out main track. It was another length back to 16-1 longshot Final Round, who closed 4-wide to finish strongly in third despite encountering traffic trouble in the drive. Favored Storm Flag Flying was a disappointment, trailing the field into the lane, showing no response when asked by jockey John Velazquez, and only able to beat one horse in the field. 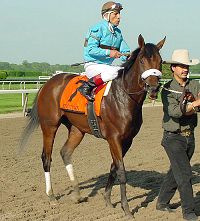 Bird Town comes back after the race. Winning jockey Edgar Prado said, "She broke good. No one wanted the lead, so I took it. I tried to slow it down as much as I could. She was really trying; she gave me 150 percent. She's just got a lot of class. For her to win the [Kentucky] Oaks like she did, and then come here and win like this is great. Good horses can do these kind of things." 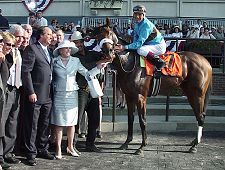 Bird Town in the winner's circle. Winning trainer Nick Zito said, "I told Edgar, 'You've got the advantage today from the outside, and if she breaks, you're going to have to let her run her race.' I was glad he didn't guzzle her back, because she came out of there flying. Lady Tak is obviously a really top filly. She was coming to us at the end, but our filly really dug in and wouldn't be denied. That was a great, great performance." The plan is to make a bid for the revamped New York Triple Tiara, consisting of the Mother Goose Stakes and Coaching Club American Oaks at Belmont, and the Alabama Stakes at Saratoga. A filly who sweeps the series wins a $2 million bonus. 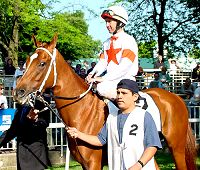 Second place finisher Lady Tak in the walking ring before the race. Her jockey Jerry Bailey, "You don't like to finish second any time. The smaller the margin, the tougher it is. You're going to run into traffic sometimes. Had my filly drawn the outside post, maybe we would have gotten up." 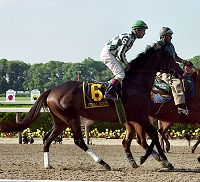 Third place finisher Final Round in the post parade. Her jockey Gary Stevens said, "She ran a real nice race. We had a good trip. The pace was quite a bit slower than I anticipated. I was a little closer than I would have liked to have been. The race kind of turned into a sprint, which didn't help her a whole lot." 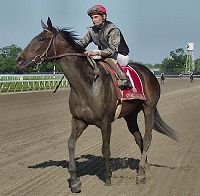 Beaten favorite Storm Flag Flying returns after the race covered with dirt. She acted up quite a bit when Velazquez was trying to get aboard in the walking ring, causing the other horses to have to take a second walk around while she delayed heading out to the post parade. Her jockey John Velazquez said, "She was good in the gate and she broke good. I thought I had great position going to the half-mile pole, but she came out of the bridle and now, I'm just trying to stay where I was. The other horses started gathering up around her, and she didn't want to be there. She just stated backing up." 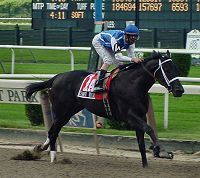 Also on the Friday card at Belmont was the Grade 3 $100,000 Flash Stakes, a 5 furlong sprint for two year olds. Six horses were originally entered but the field scratched down to just four starters because of the damp, drying-out surface. 1-3 favorite Chapel Hill easily drew away from 5-2 second choice Hasslefree to win by 5 1/4 lengths in a time of 57.02. Winning trainer Todd Pletcher said, "Everything's comes so easy for the horse, that I told everybody before he ran the first time that he was ready -- but not because I pressed him at all. He came out of the maiden race so well; it was logical to run him back here." His next start will be in either the Tremont at Belmont Park on June 28 or the Sanford at Saratoga on July 24."
Results chart Race 17