Although the 101,864 people at Belmont Park on Saturday braved the cold and rainy conditions to witness Funny Cide's failed attempt to be the 12th Triple Crown winner, the undercard had some competitive graded stakes action where rivalries in the other divisions of racing could be renewed. Although it is early in the season, many of these races may determine potential starters at the Breeders' Cup World Thoroughbred Championships because of the quality fields assembled.

The race immediately before the Belmont is the Grade 1 $400,000 Manhattan Handicap for older horses at 1 1/4 miles on the inner turf course. A field of eleven faced the starter including last year's Turf Classic winner Denon, who was sent off as the 2-1 favorite, second choice Shaanmer, making his second North American start as the 4-1 second choice, and old campaigner With Anticipation, winner of the Man o'War Stakes and runner-up in the Breeders' Cup Turf last year at 9-2.

When the gate opened, 10-1 shot Irish Colonial went to the front to control the pace on the front end for the first circuit of the course, setting slow fractions of 26.29, 53.87, 1:20.76, and 1:47.53, due to the very soft turf. When the field turned for home, Jerry Bailey kicked Denon into action after rating on the outside in seventh early on. At the top of the stretch he got to the front and opened up a 3-length lead with a furlong to go. 6-1 shot and fellow Frankel trainee Requete began his charge for the leaders as well, with a very game stretch run on the outside, but Denon dug in to hold him off for a 1/2 length victory in a pedestrian 2:14.16. 22-1 longshot Dr. Brendler closed well from ninth place to finish third. As if it was a sign of things to come, Denon is trained by Bobby Frankel and ridden by Jerry Bailey, same as eventual Belmont winner Empire Maker.

Trainer Bobby Frankel said of his 1-2 finishers, "Denon ran a good race. I wasn't concerned about his early position. He likes the soft ground and he got it. Requete (second place finisher) ran very very good. I didn't know what to expect of him. He's never run on ground like that before." This was Frankel's second straight Manhattan victory. Last year he won it with Beat Hollow. 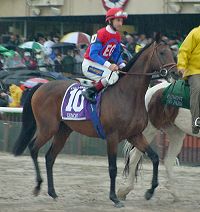 Denon in the post parade. Jockey Jerry Bailey said, "Last week was the softest course I have ever ridden on, this was softer. We're all sinking into it. I was happy with my position. I had to keep nudging him to keep him up there. I wasn't sure how much horse I had straightening away. When I asked he really accelerated. He had no trouble handling the footing." 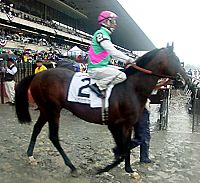 Second place finisher Requete. Edgar Prado aboard Requete said, "My horse had a beautiful kick. The other horse got the jump on us going around, and circled the whole field. I really like this horse very much. He is going to be tough later on in the big races." 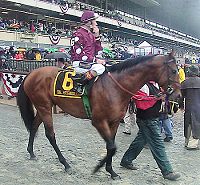 Third place finisher Dr. Brendler. His trainer, H. Graham Motion, said, "He has proven he can run under these conditions and with a pace like this one. The question was if he could handle Grade 1 company. With his finish here, I really have to reconsider and look ahead to some Grade 1 races. There is a good chance you will see him at Saratoga this year." 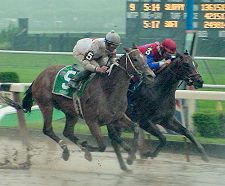 There were two Grade 2 races on the card for sprinters. The Riva Ridge was run over 7 furlongs on the sloppy main track for three-year-olds, and included Derby Trial winner and 4-5 favorite Midas Eyes. However, 3-1 second choice Posse came from off the pace early to just catch the favorite on the line by a nose, in a time of 1:22.03. Winning owner Bill Heilingbrodt said, "This makes up for yesterday after losing the Acorn (with Lady Tak, by a head to Bird Town). This is just an impressive race for him."
Results chart Race 9 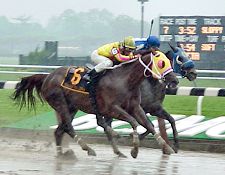 The other sprint was the True North, at 6 furlongs for older horses. 4-5 favorite Shake You Down did not disappoint his backers, gaining a 2 1/2 length lead with a furlong to go then holding off the late charge of Highway Prospector to win by a neck in 1:09.59. Trainer Scott Lake said, "I'm so proud of him. The fractions were fast and he kept going. He just wouldn't quit."
Results chart Race 7 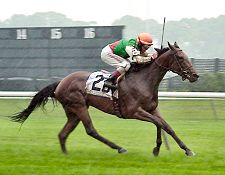 The Grade 3 Just A Game featured the older fillies and mares going a mile on the Widener turf course. 3-1 second choice Mariensky went four wide on the turn, and blew by Riskaverse and favored Wonder Again to drew off by 2 lengths in a time of 1:48.28. Winning trainer Christophe Clement said, "We knew that she would handle the soft turf course. I thought she came back in great shape from her last race (last weekend) and if a horse likes soft ground it doesn't matter if it is a mile or a mile and 3/8 (in her previous start)."
Results chart Race 8