A full field of 14 older horses contested the $1 million Breeders' Cup Turf Sprint (G1) going about 6 1/2 furlongs on the downhill turf chute at Santa Anita. Prix Morny (G1) winner No Nay Never was sent off as the 7-2 favorite off his win in the Woodford (G3).. In to challenge him included 11-2 second choice Ambitious Brew, 2nd in the Eddie D (G3), and 6-1 third choice Reneesgotzip, last year's Turf Sprint runner-up and winner of the CERF last out.

Jockey Edwin Maldonado sent Reneesgotzip to a clear lead down the hill through fast fractions of 21.69 and 43.67 over the good course, while stalked by No Nay Never and 42-1 Something Extra. Entering the straight, Reneesgotzip continued to lead but tired in the final furlong. 7-1 Bobby's Kitten, last at the end of the chute, came out 6 wide into the lane to get up by 1/2 a length over No Nay Never in 1:12.73. It was a nose back to 13-1 Undrafted third. 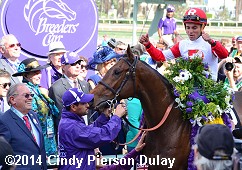 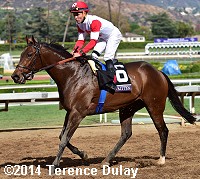 Left: Bobby's Kitten in the winner's circle with owner-breeder Ken Ramsey on the far left. Ramsey said, "I was very disappointed when I saw him dead last. I thought, oh my gosh, another Breeders' Cup nightmare. Then I saw him kicking it on the outside, and I looked at him, and I didn't know. When he hit the wire, I didn't know if he got it, and I looked around and said, 'Did he? Did he? Did he?' And they said yes and took off to the Winners Circle."

Right: Bobby's Kitten returns after the race. Jockey Joel Rosario said, "He broke fine out of the gate. I was having a little bit of trouble in the beginning because he showed more. He broke well, and then a couple horses were in the way, and I took a lot of time to really work out exactly where I wanted to be. Then after half of the race, I was on the inside. I was in hold. I could have been a little closer, but I can't. Then I just let him out after everybody goes and coming around, then he showed a really good turn for home, so I was happy with this race." 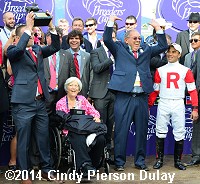 The trophy celebration with trainer Chad Brown holding the trophy, owner Ken Ramsey with his hands up, and owner Sarah Ramsey in the wheelchair. Brown said, "(Rosario) has ridden this hill so well, I knew I wasn't going to have the advantage of having to race over the course, and I at least want a jockey that has experience down the hill and has won as many races as he has, and it all worked out. I was worried until about halfway through the race, I kind of figured out what he's doing, and he's going to try to make that one move and nail everybody, and he did." 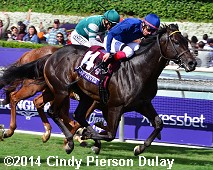 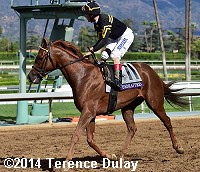 Left: Second place finisher and beaten favorite No Nay Never still leading in deep stretch. Jockey Frankie Dettori said, "He ran great. My horse thought he won, but the other horse came very wide and he didn't see him. There was no way back."

Right: Third place finisher Undrafted returns after the race. The 13-1 shot sat 10th early under John Velazquez then rallied to miss second by a nose, beaten 1/2 a length for win. He improved his record to 4 wins, 1 second, and 7 thirds, earning $528,326 for owner-trainer Wesley Ward.