The $1 million Breeders' Cup Juvenile Fillies Turf (G1) featured a field of 13 two-year-old fillies going 1 mile on the turf. Ms. Grillo (G3) winner Lady Eli was sent off as the 5-2 favorite over 9-2 Sunset Glow, winner of the Sorrento (G2) and Del Mar Debutante (G1), and 5-1 Osaila, winner of the Tattersalls Millions Juvenile Fillies Trophy and the Princess Margaret (G3). 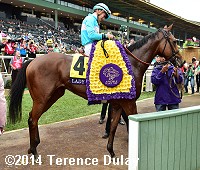 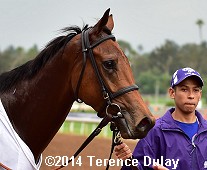 Left: Lady Eli in the winner's circle. Jockey Irad Ortiz Jr. said, "She put me in a good position from the first part of the race.Ý And I just followed what the trainers told me. And I was just waiting, waiting.Ý And at the 3/8 pole, I had a lot of horse.Ý And I knew I had to wait a little bit, but the whole space was there, and I was going for it.Ý I caught her a little early, but I believed in Chad so I called in early, and she took off and she don't give up.Ý She just kept going."

Right: Lady Eli heads back to the barn after the race. 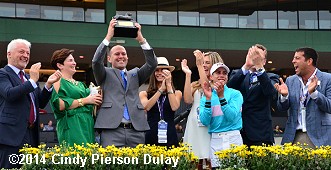 The trophy presentation for the Juvenile Fillies Turf with trainer Chad Brown holding up the trophy. Winning trainer Chad Brown said, "She's ahead of her time.Ý She's trained like a 3-year-old all summer, like a horse that's run 20 times already.Ý She has that much talent. She'll stay on the turf.Ý We trained her early on in Saratoga.Ý She was training okay on the dirt, but the first time I breezed this horse on the turf, she really took my breath away, and I've had some good turf horses." 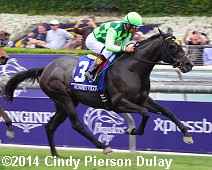 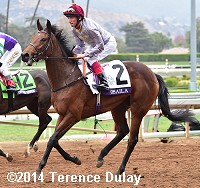 Left: Second place finisher Sunset Glow leads first time by. Jockey Victor Espinoza said, "She broke a step slow, and I had to encourage her a little bit. She lugged in a little at the 3/8 pole and the other horse (winner) got through on the inside, but she ran great."

Right: Third place finisher Osaila returns after the race. Jockey Frankie Dettori said, "She's run great, but for the first time on a track like this, she found the tight turns quite difficult, but she's run really well. I was trying to pick my way through some tight spots and when I finally got clear, the two U.S. horses just kicked on faster than mine."