The $2 million Sentient Jet Breeders' Cup Juvenile (G1) features 2-year-old colts and geldings going 1 1/16 miles on the main track, and often decides the early favorite for the next Kentucky Derby. Breeders' Futurity (G1) winner Carpe Diem was sent off as the 9-5 favorite in the field of 11. In to challenge him included 5-2 second choice Daredevil, winner of the Champagne (G1), and 6-1 third choice Upstart, second in the Champagne after winning the Funny Cide.

Owner Gary West said, "We've had a lot of nice wins, and we've won a lot of Group 1 races, but this is by far the biggest accomplishment that Mary and I have ever achieved in horse racing.  I think when everybody takes a look at what's happened over the last couple of days with the incredible speed bias, and when you go watch the replay of this race to see the amount of ground that this horse made up, I think it's going to be an impressive race when the sports writers and all the equine analysts take a look at this." 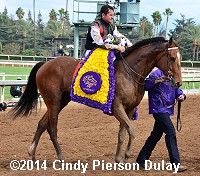 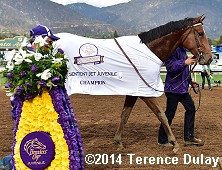 Left: Texas Red heads to the winner's circle. Jockey Kent Desormeaux said, "He was so far back, there was nobody in his way until the 1/4 pole, so it was a pretty uneventful trip. I had a horse that was slowing down in front and to the right of me, and I didn't know whether to go around him and just have an unadultered trip, because I had so much horse. So just buy another 200 yards and stay inside of him. I elected to stay inside and take that chance, and it worked out really well. Because all Texas Red did was bottle up and conserve more energy. When I swung him out, didn't really need much riding. As the Europeans say, once I presented him, he just bellied down and extended his stride. Full of power."

Right: Texas Red heads back to the barn. Co-owner Erich Brehm said, "I think one of the notes that you guys may like to know is as a yearling, Texas Red's training partner was Cozmic One, Zenyatta's baby. And that was because Texas Red was big enough to train with that horse. Maybe it did us some good." 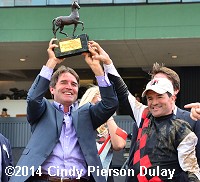 Trainer Keith Desormeaux and his brother jockey Kent Desormeaux celebrate with the trophy. This is the first time brothers have won a Breeders' Cup race in this manner. Keith said, "We've had five chances, and this is the first one. But this is always going to be the sweetest, I'm sure. Kent and I were always confident with the way the horse was training, and just when you watch the fractions and you see the whole court. The whole Breeders' Cup court seems to be won by horses on the lead. You're just hoping that you get enough of a pace to run at, and that happened." 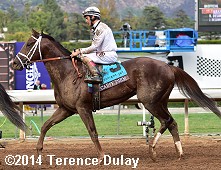 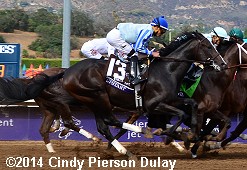 Left: Second place finisher and beaten favorite Carpe Diem returns after the race. Jockey John Velazquez said, "He started far back. Dirt hit him and he went backward instead of forward. Once he got into the clear, he started running and finished good." Trainer Todd Pletcher added, "He got a big education, a lot of dirt and a different scenario than he's been in. It took him a while to get untracked. I think he finished really well. He's a promising horse for the future."

Right: Third place finisher Upstart toward the back of the pack shortly after the start. Jockey Jose Ortiz said, "Good trip.  I was a little wide the first turn; everybody wanted to go.  I had to take back and stick in behind them.  By the 3/8 I was perfect and he was positioned very well.  When I had to move, I had the horse and everything and thought I was going to win.  The winner was much the best.  Every start he gets better.  He really improved and belonged in this race.  He will get better."