The highlight race of the Santa Anita fall meeting is the $300,000 Awesome Again Stakes (G1), featuring the best older horses of the west coast going 1 1/8 miles on the main track, and is a Breeders' Cup Challenge "Win and You're In" qualifier for the Breeders' Cup Classic. Just 11,997 fans came to the Arcadia oval on Saturday afternoon under cloudy skies and temperatures in the high 60's. Whitney (G1) winner McKinzie was sent off as the 3-10 favorite in the field of 6. In to challenge him included 3-1 second choice Higher Power, winner of the Pacific Classic (G1), and 11-1 Seeking the Soul, winner of the Stephen Foster (G2) but 7th in the Pacific Classic.

Jockey Abel Cedillo sent 25-1 Mongolian Groom to the lead first time by and he set fractions of 23.99, 48.29, and 1:12.07 while pressed by 62-1 longest shot Isotherm and stalked by McKinzie. Turning for home Mongolian Groom continued to lead through 1 mile in 1:36.95. McKinzie attempted to close to no avail as Mongolian Groom, confidently ridden by Cedillo, drew off late to win by 2 1/4 lengths in 1:49.27. It was a long 5 1/4 lengths back to late-running Higher Power third. 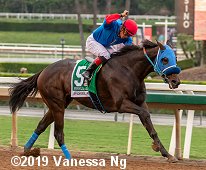 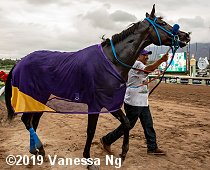 Left: Mongolian Groom in the winner's circle. Winnng trainer Enebish Ganbat said, "I didn't expect he was going to win because he was running against two of the best horses on the dirt and the best two trainers, Baffert and Sadler. I told everyone I'm happy if he comes in third. I bet $500 on show."

Right: Mongolian Groom heads back to the barns. Winning jockey Abel Cedillo said, "I would like to thank the trainer and owners. I had a lot of help and thank you Enebish Ganbat, for trusting me. He told me don't change anything, just do what you do with him, just stay close, and I saw McKinzie didn't go so I took the lead." 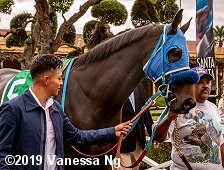 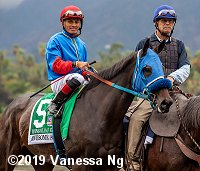 Left: Mongolian Groom in the paddock before the race. Josie Goldberg, interpreting for Ganbat added, "(Ganbat) went to a university in Russia, and the Russian mentality is, 'You fight to the end,' and that's what the horse did. He wasn't going to stop until he won. He didn't tell Abel anything, except, 'You know your job.'"

Right: Mongolian Groom in the post parade. He is not Breeders' Cup nominated and will have to be supplemented by the pre-entries deadline in order to qualify for his automatic entry into the Classic. 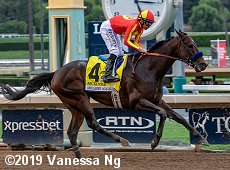 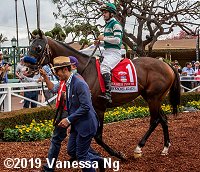 Left: Second place finisher and beaten favorite McKinzie crosses the finish line. Jockey Mike Smith said, "I thought I could go with the two outside horses, but they seemed like they were determined to get it. So I let them go figuring they'd entertain each other and we'd do what we do. That horse ran a huge race today. We lost the battle, but this ain't the war. Hopefully we'll come back and be ready."

Right: Third place finisher Higher Power in the walking ring before the race. The John Sadler trainee improves his record to 5 wins, 1 second, and 5 thirds in 14 starts, earning $836,648 for owner Hronis Racing.

The horses break from the gate for the Awesome Again Stakes. Ganbat added, “I told the jockey to do what he had to and he did OK, the horse won at 25-1. That’s horse racing. I expected him to hold off McKinzie through the stretch. My horse was not stopping. He continued to go."

The $300,000 Rodeo Drive Stakes (G1) featured a field of 6 older fillies and mares going 1 1/4 miles on the turf, looking for automatic entry into the Breeders' Cup Filly and Mare Turf. Beau Recall was sent off as the 6-5 favorite off her win in the Yellow Ribbon Handicap (G2). In to challenge her included 11-4 second choice Elysea's World, 6th in the John C. Mabee (G2) last out, and 9-2 third choice Paved, 4th in the John C. Mabee.

Jockey Mike Smith sent 6-1 Mirth to a clear lead down the hill and across the main track through fractions of 23.72, 47.53, 1:11.05, and 1:35.00 while pressed by 11-2 fourth choice Excellent Sunset and stalked by Elysea's World. Mirth opened up a 2 length lead midstretch through 9f in 1:46.63. Favorite Beau Recall, 4th early under Drayden Van Dyke, came out for room and rallied but left with too much ground to make up as Mirth cruised the rest of the way to win by 1 1/4 lengths in 1:58.47. It was another neck back to Elysea's World third. 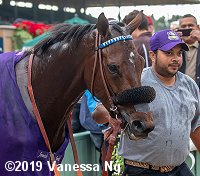 Left: Mirth in the winner's circle. Winning owner Billy Koch said, "When she turned for home she kept going at the same pace and I didn't see anybody coming. It was really great." Trainer Phil D'Amato added, "She was kind of a late entry into the race. We were the lone speed and Mike (Smith) just kind of doled it out the right way and had plenty left."

Right: Mirth heads back to the barn after the race. Winning jockey Mike Smith said, "I've watched her, and she's been running dynamite. It looked like she wasn't far from pulling one of these off, so I knew it was in her. It was just a matter of whether I could get a little brave and start marching a little early. She doesn't really have a turn of foot; she just seems to keep staying and keep going. I felt like I had gotten away with that at the half-mile pole, so going into the turn I started marching on where I was going to lengthen everybody's kick instead of trying to make an explosive move. It worked today. It might not work next time, but it worked today." 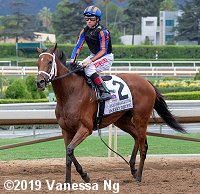 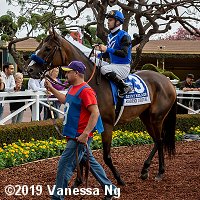 The $200,000 John Henry Turf Championship (G2) is not a Win and You're In qualifier but is the major local prep for the Breeders' Cup Turf, with a field of 8 older horses going 1 1/4 miles on the turf. Charles Whittingham (G2) runner-up United was sent off as the 9-4 favorite. In to challenge him included 5-2 second choice Acclimate, winner of the Del Mar Handicap (G2), and 3-1 third choice Grecian Fire, 3rd in the Del Mar Mile Handicap (G2). 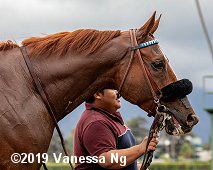 Left: Cleopatra's Strike in the winner's circle. Winning trainer Phil D'Amato said, "I was confident in his ability I just didn't know what his distance limitations may or may not be. He trained like a horse that could go a mile and a quarter and Abel rode him to perfection and we got the job done today. It's bittersweet because my other horse (Acclimate) was doing those fractions and to see them both, dueling in deep stretch, I'm proud of them both but Cleopatra proved best, and I am happy for Slam Dunk Racing. For sure (runner-up and stablemate) Acclimate will go (to the Breeders' Cup) because he already is eligible but we'll have to see about Cleopatra. There might be something for him at Del Mar."

Right: Cleopatra's Strike heads back to the barn. Winning jockey Abel Cedillo, celebrating his first stakes win at Santa Anita said, "Phil told me, 'Make sure to keep him off the pace.' If he was going to stay with Acclimate, it was going to go bad. I knew if I could keep him on the bit, he was going to come home. I got a perfect trip. I was just sitting inside and everybody got tired, and I just went. I tried to go with Victor, because I know that horse is tough on the lead. As soon as I got close to him, I knew I had it." 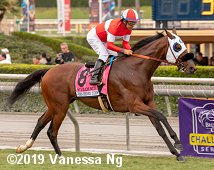 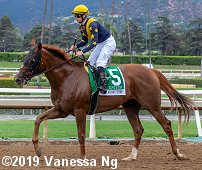 Left: Second place finisher Acclimate leads first time by. Jockey Victor Espinoza said, "He's a pretty cool horse. We asked a lot of today, but I love the way he ran. When the winner came to us, I love the way he fought back." 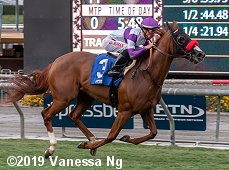 The last race on Saturday was the $75,000 Unzip Me Stakes for 3-year-old fillies sprinting the new distance of 5 1/2 furlongs on the turf. Don't Sell and Miss Hot Legs both were sent off at 3-1 with Stealthediamonds the 13-4 third choice in the field of 10.

Jockey Victor Espinoza sent Miss Hot Legs to the lead exiting the new "dirt chute" through fractions of 21.94 and 44.48 while pressed by 48-1 Devils Dance and stalked by Stealthediamonds. Turning for home, jockey Evin Roman sent Don't Sell 3 wide for room and she rallied to gain the lead midstretch through 5f in 55.75, drawing off late to win by 1 1/4 lengths over late-running 11-2 Apache Princess in 1:01.58. It was another length back to 15-2 Holly Hundy third.

Winning trainer Doug O'Neill said, "I thought Evin (replacement jockey) put him in a good spot and thank (owners) Paul and Zilla (Reddam) for giving him a chance and it worked out good. She's (by) Square Eddie, they go sprint, route, turf, dirt, so I'm just so blessed to have a lot of Square Eddies, I always feel a lot of confidence leading them over." Mario Gutierrez was originally named to ride but booked off the rest of the card after he was thrown off Emtech in the 8th race who took a bad step and fell. Gutierrez was uninjured however Emtech was euthanized having suffered fractures to both forelimbs.