The feature race on Saturday at Del Mar's summer meeting was the $200,000 Yellow Ribbon Handicap (G2) for older fillies and mares going 1 1/16 miles over the Jimmy Durante turf course. Conditions were excellent at the seaside oval with partly cloudy skies and temperatures in the low 70's. Vasilika was sent off as the 9-10 favorite in the field of 6 off 4 straight wins including the Gamely (G1) last out at Santa Anita. In to challenge her included 2-1 second choice Beau Recall, 2nd in the Just a Game (G1) after winning the Distaff Turf Mile (G2), and 9-2 third choice Valedictorian, winner of the Eatontown (G3).

Valedictorian was quickest away through an opening quarter of 23.98 before Storm the Hill took over through a half in 48.02 and 3/4 in 1:12.09 while stalked by Vasilika. Turning for home, Storm the Hill opened up a 1 1/2 length lead through 1 mile in 1:35.17, but Beau Recall, 4th early under Drayden Van Dyke, came through on the inside to win by a nose in 1:41.23. It was another 1/2 length back to favorite Vasilika third. Mario Gutierrez aboard last place finisher Lemoona claimed foul against Van Dyke aboard the winner for interference leaving the far turn but the claim was disallowed as the incident did not alter the order of finish. 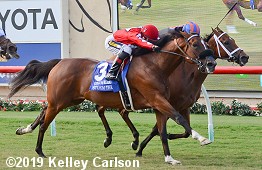 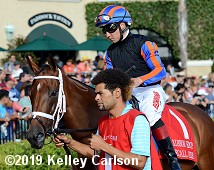 Left: Beau Recall in the winner's circle. Donnie Bathazar, assistant to winning trainer Brad Cox said, "Brad just told me to keep her happy and get her to the race happy and healthy. Brad called Drayden earlier today and then Drayden and I just touched base before the race to go over what Brad said. After that, it was him and her. I was nervous at the finish and then it got even more nerve wracking with the objection. I've come out here before when we have one running, but I've never won a stakes like this." This was the first Del Mar stakes win for Brad Cox.

Right: Beau Recall in the paddock. Winning jockey Drayden Van Dyke said, "That incident (near the far turn) cost me at least half a length. I got pushed out. My mare was going good and got thrown off stride. She was game. She was coming good. I was hoping I got there, but I had no idea." 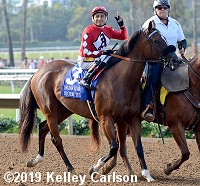 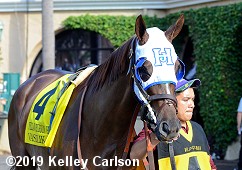 Right: Third place finisher and beaten favorite Vasilika in the paddock before the race. Jockey Julien Leparoux said, "She was in a good position and she ran well. She gave it a good try. I think the slow pace cost us a bit."


The co-feature on Saturday was the $200,000 Sorrento Stakes (G2) for 2-year-old fillies sprinting 6 furlongs on the main track. Amalfi Sunrise was sent off as the 7-10 favorite in the field of 6 off her 6 1/4 length debut win at Santa Anita. In to challenge her included 2-1 second choice Comical, winner of her 2 starts including the Schuylerville (G3) at Saratoga last out, and 9-2 third choice Shedaresthedevil, a debut winner at Churchill Downs.

Comical was quickess out of the chute through an opening quarter of 22.50 before jockey Norberto Arroyo Jr. sent Amalfi Sunrise to lead through a half in 45.91. Entering the stretch Amalfi Sunrise left the field in her wake, opening up by 4 lengths midstretch through 5f in 58.17, and cruising the rest of the way to win by 6 lengths over late-running 19-1 Powerfulattraction in 1:10.96. It was a nose back to Shedaresthedevil third. 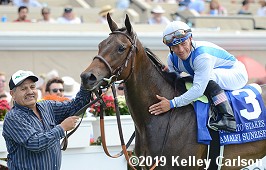 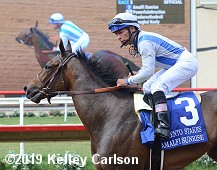 Left: Amalfi Sunrise in the winner's circle. Winning trainer Simon Callaghan said, "It really was impressive the way she drew away at the end. She's a naturally fast filly and that's the way she likes to run, up near the pace. She took a lot of heat and still was able to pull away which was very professional."

Right: Amalfi Sunrise returns after the race. Winning jockey Norberto Arroyo Jr. said, "Oh, I had a ton of horse. She's a very nice filly. Maybe the best filly I've ever been on to this point, and I've been on some nice fillies. She's something special." 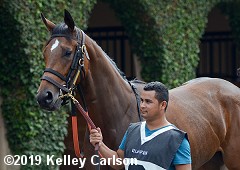 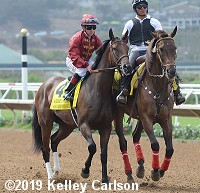 Left: Second place finisher Powerfulattraction in the paddock. Jockey Joe Talamo said, "She broke good, settled and closed nicely. She'll like seven-eighths. In fact, she'll like it even farther. That'll be even better for her."

Right: Third place finisher Shedaresthedevil in the post parade. Jockey Drayden Van Dyke said, "She gave it a good try. The winner is more than a little bit good. But my filly is a nice one and she'll get better with distance."