Friday was opening day for the Santa Anita fall meeting, with three graded stakes on the card including two Breeders' Cup Challenge Series races. Conditions were excellent at the Arcadia oval with cloudy skies and temperatures in the low 70's for the 5,188 fans in attendance. The main track was rated fast and turf was firm.

The $300,000 American Pharoah Stakes (G1) featured a field of nine 2-year-olds going 1 1/16 miles looking for automatic entry into the Breeders' Cup Juvenile. Eight Rings was sent off as the 6-5 favorite despite losing his rider at the break in the Del Mar Futurity (G1) last out after winning his debut. In to challenge him included 3-1 second choice Express Train, a maiden winner at second asking, and 13-2 third choice Shoplifted, second in the Hopeful (G1) at Saratoga.

Jockey John Velazquez sent Eight Rings to the lead first time by and he set fractions of 23.72, 47.06, and 1:11.71 while pressed by 7-1 fourth choice American Theorem and stalked by 53-1 Fore Left. Turning for home Eight Rings opened up on the field, gaining a 3 length advantage midstretch through 1 mile in 1:38.11. Kept to task by Velazquez, Eight Rings powered away late to win by 6 lengths over American Theorem in 1:45.41. It was another 2 1/4 lengths back to 19-1 Storm the Court third. 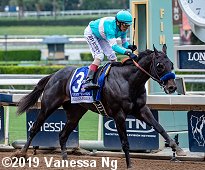 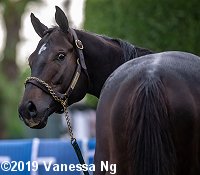 Left: Eight Rings in the winner's circle. Winning owner Tom Ryan said, "I guess I had more of a hand in putting the team together to select a colt. The colt was really selected by Bob Baffert, Henry Field, the Frankie brothers, a lot of great people involved in the syndication. We are big supporters of syndication and here are the results. Baffert calls our syndication the Avengers. Bob gives you confidence; this morning he said we are ready. It's an exciting month ahead of us more than any of us ever dreamed of."

Right: Eight Rings back at the barn after the race. Winning trainer Bob Baffert said, "The horse was training really well. I told Johnny V. to ride him with confidence.I thought he might be in front. Johnny said let's get him away from there, and he's figured out this track. He gigged him a little bit, but he said, 'Wow, he's really fast.' He just got out there really quick and I was actually just watching his ears the whole way. Johnny said he'll be going good, then he'll start looking around and lagging, and all the way down the stretch he was still looking around. But it was a good race for him, coming off that last disastrous race. I'm just so fortunate that Drayden (Van Dyke) didn't get hurt worse." 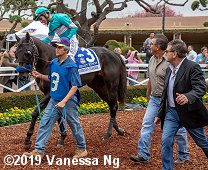 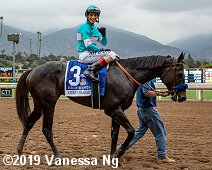 Left: Eight Rings in the walking ring before the race. Winning jockey John Velazquez said, "He's still not 100 percent confident in what he needs to do. Obviously he's very talented, but he needs to put it together and go on. He still ran a good race, but you can see he has some room to improve. If he can put his mind to running, he'll be a dangerous horse."

Right: Eight Rings returns after the race. Velazquez added, "I wanted to put him into the race, and that way he could get his mind on running. I was pretty comfortable with the way he was moving in the backstretch. But he kept kind of wandering, so I felt like I had to keep reminding him to focus. It's only his second start, so he's still learning basically." 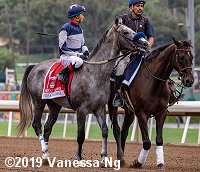 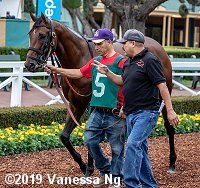 Left: Second place finisher American Theorem in the post parade. Jockey Tiago Pereira said, "I hoped to win, obviously, but I think it was a great race. I followed a horse that was great as well. I am happy, second place is good, and I continue confident for the next race. I think I have a great horse. It will win many big races."

Right: Third place finisher Storm the Court in the paddock before the race. The Peter Eurton trainee improved his record to 1 win, 0 seconds, and 1 third in 3 starts, earning $72,951 for owners David Bernsen, Exline-Border Racing, Dan Hudock, and Susanna Wilson.

The start of the American Pharoah Stakes.

Kicking off the stakes action for the fall meeting was the $300,000 Chandelier Stakes (G1) featuring 6 two-year-old fillies going 1 1/16 miles looking for automatic entry into the Breeders' Cup Juvenile Fillies. Bast was sent off as the 1-5 favorite, undefeated in 2 starts including the Del Mar Debutante (G1) last out. In to challenge her included 9-2 second choice Been Studying Her, winner of the Generous Portion Stakes, and 11-1 third choice Comical, winner of the Schuylerville (G1) at Saratoga but 6th in the Sorrento (G2) and 3rd in the Del Mar Debutante.

After 25-1 longest shot Leucothea lost jockey Norberto Arroyo Jr. at the start and ran loose, jockey Abel Cedillo sent Comical to the lead first time by and she set fractions of 24.92, 49.54, and 1:13.98 while pressed by Bast and stalked by Been Studying Her. Entering the lane jockey John Velazquez moved Bast up to challenge setting up a duel to the line through 1 mile in 1:39.29. The pair battled through the final furlong as Bast prevailed by a neck in 1:46.10. It was another 3 lengths back to 17-1 K P Dreamin third. 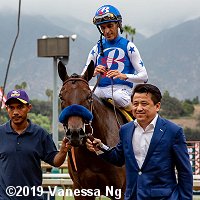 Left: Bast in the winner's circle. Winning trainer Bob Baffert said, "I thought, wow, man, she's really going to have to fight for this, but if she's a really good filly, like I think she is, she'll get through it, and she got that last 1/8 mile. It just shows you how competitive these horses are. Down the backside she was going nice, then turning for home, John was like, 'Come on baby, we've got to go,' and she wasn't going. He thought she would respond, but I think this will get her ready for the (Breeders' Cup)."

Right: Owner Charles Chu leads Bast to the winner's circle. Winning jockey John Velazquez, winning his 661st career graded stakes, breaking Jerry Bailey's previous record of 660, said, "This means a lot. Jerry is a guy who I rode with for so many years and have looked up to for so long. It's incredible. Going to the backstretch, she looked really good, and I was pretty confident. We got to the turn and I thought we might go a little wide, but I said 'no, no – you have to stay there.' I got up to her and she cruised down the lane and put her head out in front of the other horse. She gave me a lot today. I felt she gave me what she could to win the race." 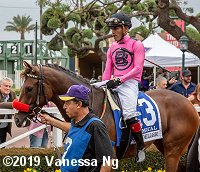 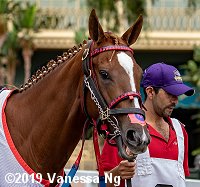 Left: Second place finisher Comical in the paddock. Jockey Abel Cedillo said, "I know the other horse was a tough one. I like my filly, though. I worked her last week and she worked really easy. She tried really hard today. She kept coming, but I think the better horse beat me."

Right: Third place finisher K P Dreamin in the paddock. Jockey Ruben Fuentes said, "My horse ran great. I wish there was a little more speed to run at because our pace was a little slow for anyone to make up some ground. I wish there was somebody pressing the favorite, she had a comfortable trip, nice and easy. She's most likely going to the Breeders' Cup. We can get a bigger field there. We can probably get a better pace to run at there, too".

The start of the Chandelier with Leucothea bearing out and dumping her jockey.

The $200,000 Eddie D Stakes (G2), named in honor of Hall of Fame jockey Eddie Delahoussaye, featured a field of 8 older horses sprinting 5 furlongs on the turf. Due to safety considerations the 6 1/2 furlong downhill turf sprints have been suspended, including for the Breeders' Cup Turf Sprint, however this is not a Breeders' Cup Challenge event. Green Flash Handicap (G3) runner-up Eddie Haskell was sent off as the 9-5 favorite over 5-2 Pee Wee Reese, winner of the Sensational Star Stakes, and 3-1 Mr Vargas, winner of the Green Flash.

Jockey Edwin Maldonado sent 35-1 Boa Nova to the lead down the back through an opening quarter of 21.41 while pressed by Mr Vargas and stalked by Pee Wee Reese. Turning for home jockey Flavien Prat sent Pee Wee Reese to the front through a half in 43.92. Eddie Haskell, 7th early, put in a strong rally but Pee Wee Reese held him off to win by 1/2 a length in 55.33, just 27/100 off the course record. It was another 1 1/4 length back to 6-1 fourth choice Stormy Liberal third. 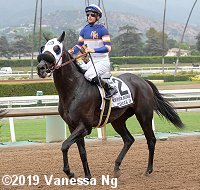 Left: Pee Wee Reese in the winner's circle. Winning jockey Flavien Prat said, "We had a good trip. He broke well and there were two horses that were off quicker than us, so we sort of sat in behind them. When we had the opening in the stretch, he gave me a good kick. It's a five furlong race, so you don't expect (the pace) to be slow at all." Owner Nick Alexander added, "This guy was nothing special for his first couple races on the dirt, broke his maiden on the dirt just barely, and when we switched to the turf he was a different horse."

Right: Pee Wee Reese returns after the race. Winning trainer Phil D'Amato said, "Flavien had it in mind to stay at the back coming out of the jock's room so I told him to play the break; to go suicidal in 21 is never a good thing, so I just told him to do what he thought was best and he got him in a nice spot in the pocket, found a hole there at the top of the lane and exploded through. For turf horses, San Luis Rey Downs is a great place. They can get plenty fit down there and he really likes it there and he will probably go back down there." 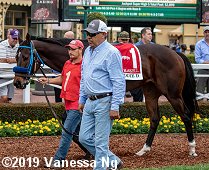 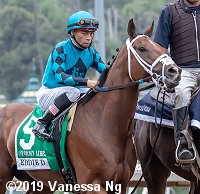 Left: Second place finisher and beaten favorite Eddie Haskell in the paddock. Jockey Joel Rosario said, "Yeah, he did (finish well). He tried really hard, just got beat by another fast horse. Second best, but he pulled his own. He tried really hard, and he's a good horse, so we'll see where they will go next."