The highlight race of the Del Mar summer meeting is the $1 million TVG Pacific Classic (G1), featuring the best older horses of the west coast going 1 1/4 miles, and is a Breeders' Cup Challenge "Win and You're In" qualifier for the Classic. Just 20,686 fans came out to the seaside oval on Saturday afternoon under sunny skies and temperatures in the low 70's. Seeking the Soul was sent off as the 9-4 favorite in the field of 10 off his win in the Stephen Foster (G2) after finishing third in the Alysheba (G2). In to challenge him included 3-1 second choice Quip, winner of the Oaklawn Handicap (G2) but 2nd in the Foster, and and 5-1 third choice Draft Pick, third in the Suburban (G2).

Jockey Florent Geroux sent Quip to the lead first time by through fractions of 23.68, 47.69, and 1:12.65 while pressed by 19-2 Higher Power and stalked by 18-1 Mongolian Groom. Turning for home Quip tired allowing Higher Power to inherit the lead through 1 mile in 1:37.32. Kept to task by Flavien Prat, Higher Power drew off late to win going away by 5 1/4 lengths over late-running 13-1 Draft Pick in 2:02.43. It was a neck back to Mongolian Groom third, while Seeking the Soul failed to rally finishing 7th beaten 18 1/2 lengths. 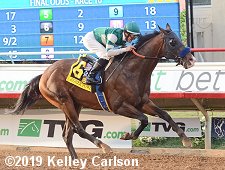 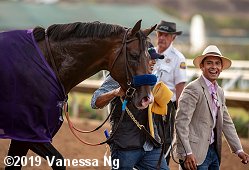 Left: Higher Power in the winner's circle. Winning trainer John Sadler said, "The second time is just as sweet. (The same connections won the TVG Pacific Classic last year with champion Accelerate.) It developed pretty much the way we thought. We thought there would be some speed on the inside and the plan was to stalk. It came out the way we thought it would."

Right: Higher Power heads back to the barn after the race. 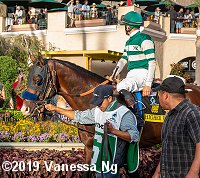 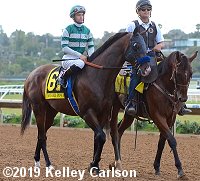 Left: Higher Power in the paddock before the race. Winning jockey Flavien Prat said, "There were no special instructions, just to make him comfortable. We were in a good spot all the way around. At the three-eighths (pole) I asked, and he took up the bit and went from there. He was traveling well all the way around. I thought he would run a good race today. He had been training so well, I thought he'd have a good one in him today." 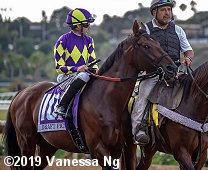 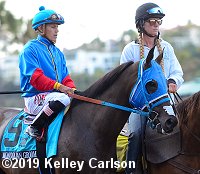 Left: Second place finisher Draft Pick in the post parade. Trainer Peter Eurton said, "Very happy with the effort. There are some very good horses in there and we were about five wide the whole way. Couldn't be happier." Jockey Joe Talamo added, "He ran huge. I had lots of horse all the way around there. Hats off to the winner, but my horse ran great. Peter asked me ‘What do we do now?' I told him – win the (Breeders' Cup) Classic!"

Right: Third place finisher Mongolian Groom in the post parade. Jockey Abel Cedillo said, "My horse ran well. It was a good race for him." 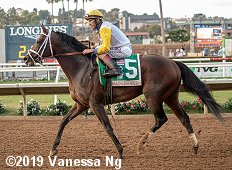 Left: Seventh place finisher and beaten favorite Seeking the Soul returns after the race. Jockey John Velazquez said, "He didn't try at all. No effort. I don't get it. I just don't know why. Nothing. Very disappointing."

Right: Shortly after the start of the Pacific Classic.

Immediately before the Pacific Classic was the $300,000 Del Mar Oaks (G1) Presented by The Jockey Club for 3-year-old fillies going 1 1/8 miles on the turf. Wonder Again (G3) winner Cambier Parc was sent off as the 6-5 favorite in the field of 13 off her 3rd place finish in the Belmont Oaks Invitational (G1). In to challenge her included 13-2 second choice Raymundos Secret, undefeated in 2 starts and making her stakes debut here, and 7-1 third choice Mucho Unusual, winner of the San Clemente (G2). 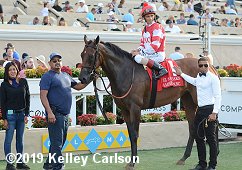 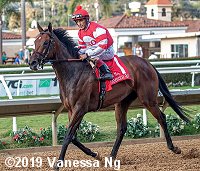 Left: Cambier Parc in the winner's circle. Winnng owner Larry Best said, "I left all the terms of guidance to John (Velasquez) and to Chad Brown. The horse looked very relaxed all the way around and I'm glad she had the turn of foot to get home."

Right: Cambier Parc returns after the race. Winning jockey John Velazquez said, "It sure is nice to ride one like this. When you ask for it, they give it to you. We were in a good spot the first time by the wire and comfortable. When we went past the three-quarters, I shifted her out to where she was comfortable. We'd already saved enough ground and I wanted to get her going. She took care of it from there." 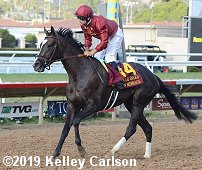 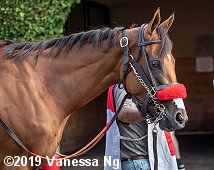 Right: Third place finisher Lady Prancealot in the paddock before the race. Jockey Joe Talamo said, "She came flying at the finish. A really good try for her. That post (No. 11) didn't help us any."

The $250,000 Del Mar Handicap (G2) Presented by the Japan Racing Association featured a field of 7 older horses going 1 3/8 miles on the turf, and is a "Win and You're In" qualifier for the Breeders' Cup Turf. Arlington Handicap (G3) runner-up The Great Day was sent off as the 9-5 favorite over 2-1 Marckie's Water, 2nd in the Eddie Read (G2), and 4-1 Itsinthepost, second in he Cougar II Handicap (G3). 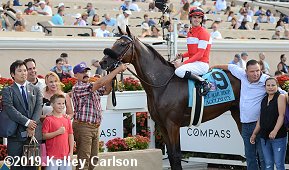 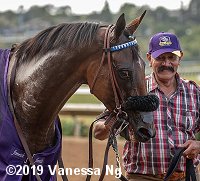 Left: Acclimate in the winner's circle. Winning trainer Phil D'Amato said, "He had been breezing up a storm, so I knew he was in good form. But you're up against a lot of nice horses and it's great that he proved the best today."

Right: Acclimate returns after the race. Winning jockey Florent Geroux said, "It worked out very well. The horse was sharp. He went to the front easily. And he ran relaxed all the way." 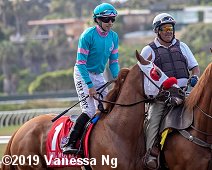 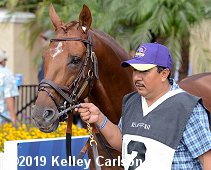 Left: Second place finisher Oscar Dominguez in the post parade. Jockey Joe Talamo said, "We had our trip. The leader just never came back to us."

Right: Third place finisher Ritzy A.P. in the paddock before the race. Jockey Martin Garcia said, "Too easy up front for the winner. I wanted to go get him, but I couldn't move my horse too soon." 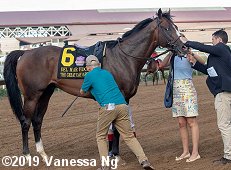 Fifth place finisher and beaten favorite The Great Day gets unsaddled after the race. The Arnaud Delacour trainee has a record of 4 wins, 6 seconds, and 1 third in 14 starts, earning $281,915 for owner Lael Stables.

Kicking off the stakes action on Saturday was the $100,000 Green Flash Handicap (G3) for older horses sprinting 5 furlongs on the turf. Daytona (G3) and Siren Lure winner Eddie Haskell was the 6-5 favorite in the field of 6 over 2-1 Stormy Liberal, two-time winner of the Breeders' Cup Turf Sprint (G1), and 3-1 Mr Vargas, an allowance winner last out.

Jockey Joe Talamo sent Mr Vargas to the lead down the backstretch through fractions of 22.44 and 44.35 while pressed by Stormy Liberal and stalked by Eddie Haskell. Turning for home Mr Vargas continued to lead, drawing off late to win by 2 1/4 lengths over Eddie Haskell in 56.15. It was another 1/2 length back to Stormy Liberal third. 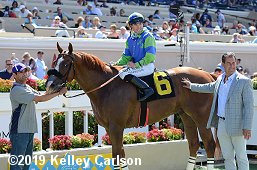 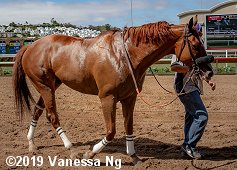 Left: Mr Vargas in the winner's circle. Winning trainer Brian Koriner said, "He's just a runner. He ran great his first race here and did it again today. He's a racehorse! A fast, fast horse." Winning jockey Joe Talamo said, "We California Flagged ‘em! The plan was to get him out there and make the lead. He did his part. He got a little breather when I dropped over at the half (half-mile pole) and again on the turn, but otherwise he was running hard all the way. When they came for him he just went on. I was afraid they were going to be closing on us, so I went for it and he responded very well. He's a really nice horse."

Right: Mr Vargas heads back to the barn after the race. 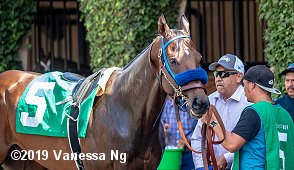 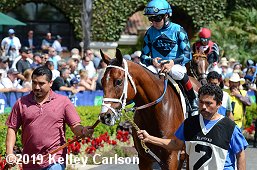 Left: Second place finisher and beaten favorite Eddie Haskell in the paddock before the race. Jockey Kent Desormeaux said, "He ran really well. The winner was just too tough today."

Right: Third place finisher Stormy Liberal in the paddock. Jockey Drayden Van Dyke said, "He ran good. I think this race will serve him well on down the line." 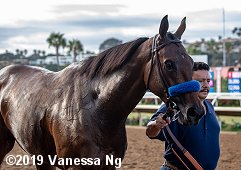 Left: Fighting Mad in the winner's circle. Winning trainer Bob Baffert said, "We were hoping she could get a mile. I've been taking my time with her, but the way she's been working and the way she's showed she loved this track, we were hoping it would turn out the way it did."

Left: Fighting Mad heads back to the barn after the race. 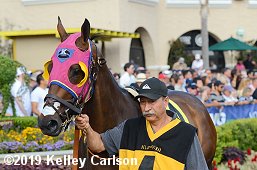 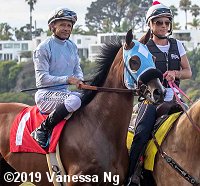 Left: Second place finisher Hollywood Hills in the paddock before the race. Jockey Julien Leparoux said, "It was a good race for my horse. The winner was just too far gone."

Right: Third place finisher Into Chocolate in the post parade. Jockey Mike Smith said, "Her race was good – all good. She was good in the gate and she ran good. I thought I might have it. But not today." 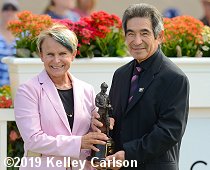 Jockey Julie Krone was presented with the 2019 Laffit Pincay Jr. Award, which recognizes integrity, dedication, determination and distinction. Krone, the 16th honoree, is one of the greatest female athletes of all time, being the only female jockey to win a Triple Crown race, the first to win a Breeders' Cup race, the first to be a top rider at a major American race meeting, and is the only female jockey inducted into the Hall of Fame in Saratoga Springs. In 2003 she won the Pacific Classic aboard Candy Ride in a track record time of 1:59.11 which still stands. She retired from riding in 2004.

Her husband, writer Jay Hovdey, wrote "One Sweet Ride" which chronicles her historic 2003 Del Mar season. Krone said, “I wish everyone could feel what it's like to ride a racehorse like Candy Ride, especially in a race like the Pacific Classic. I loved helping Jay tell the story of how that magical moment came together on a very special day.” Hovdey added, “Every running of the Pacific Classic is memorable in its own way. The 2003 running just happened to hit closer to home than any of the others. I hope readers will enjoy reliving the tale and appreciate the way so many years of racing history boiled down to that exciting 1:59 and change.” Krone, Hovdey, and Candy Ride's owner Jenny Craig were on hand to sign copies of the book for fans.