Labor Day marks the end of the Del Mar summer meet. Just 8,665 fans came out on a sunny holiday Monday with temperatures in the low 70's, with the main track rated fast and the Jimmy Durante Turf Course going firm. The feature race on closing day and the final stakes of the meeting is the $300,000 Runhappy Del Mar Futurity Stakes (G1) for 2-year-olds sprinting 7 furlongs on the main track. Eight Rings was sent off as the 1-2 favorite in the field of 8 off his debut win by 6 1/4 lengths on August 4. In to challenge him included 4-1 second choice Garth, 2nd in his debut on August 10, and 10-1 third choice Wrecking Crew, 2nd in the Best Pal Stakes (G2).

Exiting the chute, favorite Eight Rings, 18-1 Ginobili, and 14-1 Storm the Court bumped, causing Drayden Van Dyke (Eight Rings) and Flavien Prat (Storm the Court) to be unseated. Garth led through fractions of 21.89 and 44.90 while pressed by 12-1 Fore Left and stalked by Ginobili and 35-1 Nucky. Enteing the lane, Nucky, 4 wide, swept to lead through 3/4 in 1:11.09. Wrecking Crew put in a strong late rally from 5th to no avail as Nucky and jockey Norberto Arroyo Jr. drew off late to win by 2 3/4 lengths in 1:25.52. It was another 1/2 length back to 38-1 longest shot Defense Wins third. Trainer Richard Baltas of Ginobili claimed foul against Arroyo aboard Nucky for interference at the top of the stretch but the claim was disallowed. 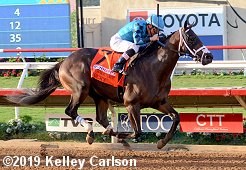 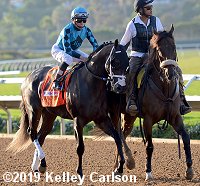 Left: Nucky in the winner's circle. Winning trainer Peter Miller said, "It was obviously unfortunate. You never want to see any horse or rider go down. My first thoughts are with the horses and the riders. I don't know what happened, but after that, we won clear. I wasn't worried (about the inquiry). They bumped slightly, but the No. 4 (Ginobili) was tiring. To finish 1-2 in the Del Mar Futurity, for me, I mean it's just incredible under any circumstances."

Right: Nucky in the post parade. Winning jockey Norberto Arroyo Jr. said, "What a way to end the meet. I don't deserve this. But somebody wanted me to have it. I thank the Lord up above. My aim was to track the 2 horse (favored Eight Rings). My horse broke good and I was looking for the 2. By the four and a half (furlong pole) I couldn't see him (the 2) at all and I knew something must have happened. Then I just went to riding my horse. He responded well. I don't know if he was the best horse in the race to start, but he was the best to finish. He responded well at the end." 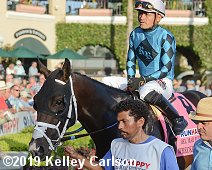 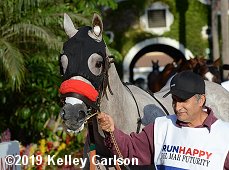 Left: Second place finisher Wrecking Crew in the paddock. Jockey Abel Cedillo said, "He ran huge. He got a little tired at the end, but he was a runner. Great race for him."

Right: Third place finisher Defense Wins in the paddocl. Jockey Rafael Bejarano said, "He's still a little green. But it was a very good try for him today. When they run farther, he's going to be better." 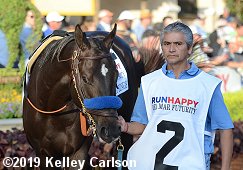 Favorite Eight Rings, who lost his rider early in the race and was unplaced, in the paddock. The Bob Baffert trainee has a record of 1 win in 2 starts, earning $36,951 for owners SF Racing, Starlight Racing, Madaket Stables, Frederick Hertrich III, John D. Fielding, and Golconda Stables.


The $100,000 Del Mar Juvenile Fillies Turf Stakes featured a field of eleven 2-year-old fillies going 1 mile on the Jimmy Durante turf course. Sorrento Stakes (G2) third place finisher Shedaresthedevil was sent off as the 6-5 favorite over 5-1 Overjoyed, making her debut here, and 11-2 Croughavouke, in from Ireland where she broke her maiden at second asking at Limerick.

Jockey Flavien Prat sent Shedaresthedevil to lead through fractions of 23.24, 48.27, and 1:12.02 while pressed by 20-1 Text Dont Call and stalked by 42-1 Acai. Turning for home jockey Victor Espinoza sent 11-1 Yesterdayoncemore, 6th early, to take over the lead through 7f in 1:24.07. Croughavouke put in a strong rally from 8th but Yesterdayoncemore held her off by a length in 1:35.67. It was another 3 1/4 lengths back to 7-1 Applecross third, and 1 1/2 more to favorite Shedaresthedevil fourth. 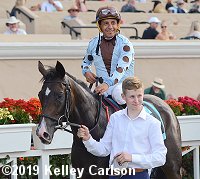 Yesterdayoncemore in the winner's circle. Winning jockey Victor Espinoza said, "They said in a perfect world, if you can sit three or four lengths back, cover her up, and then make a late run. It worked out just that way. She's built strong and I thought she'd love this turf. Sure enough. I was just going to play it with her off the break, and she broke great. This kind of horse will pretty much take you there. She did today. This has been a very good meet for me. I'm very pleased. I really couldn't have asked for more."