The highlight race on Saturday at Del Mar was the $200,000 Best Pal Stakes (G2) for two-year-olds sprinting 6 furlongs on the main track. Conditions were excellent with sunny skies and temperatures in the low 70's. Fore Left was sent off as the 9-10 favorite in the field of 6, undefeated in 2 starts including the Tremont last out at Saratoga. In to challenge him included 3-1 second choice Wrecking Crew, a debut winner last out, and 6-1 third choice We're Still Here, second in both his starts.

Jockey Ruben Fuentes sent 9-1 Thanks Mr. Eidson to the lead exiting the chute through fractions of 22.13 and 45.28 while pressed by 18-1 Raging Whiskey and stalked by Fore Left and We're Still Here. Turning for home Thanks Mr. Eidson still led through 5f in 57.95 but tired late. 15-2 fourth choice Collusion Illusion, 5th early under Joe Talamo, came out 4 wide for roon and rallied to win by 1 1/4 lengths over Wrecking Crew in 1:11.34. It was a neck back to favorite Fore Left third. 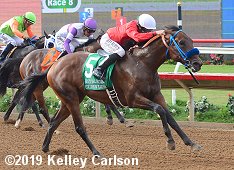 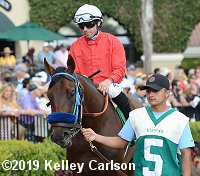 Left: Collusion Illusion in the winner's circle. Winning trainer Mark Glatt said, "He's been nothing but a pro from Day One since we got him after the sale. He was probably ready earlier than the race he actually debuted in (July 21 win here) but we decided to wait for Del Mar and we're extremely pleased with him. This race came up a little bit quick, I usually like to give a horse more time after his debut, but he's such a classy horse and he never missed a bite of grain. I thought about running him back in the Futurity but who knows what will happen between now and September and he was ready to run now. I wouldn't rule out the Futurity. That might be a little too aggressive with him, but we'll keep it as an option."

Right: Collusion Illusion in the paddock. Winning Joe Talamo said, "I had the beautiful trip. And the speed set it up right. I was impressed with my horse the way he gutted it out down the lane. And I think the farther the better with him. Wait ‘til he goes seven eighths or two turns. Then you're going to see the best of him." 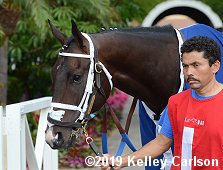 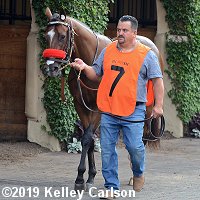 Left: Second place finisher Wrecking Crew in the paddock. Jockey Nike Smith said, "I don't know what happened. He was ready for it (the break). And then he just took a left on me. I don't know if he saw the (No.) 2 horse, or what. And I don't want to take anything away from the winner, but I sure would have like to have seen what would have happened (if he had broken properly)."

Right: Third place finisher and beaten favorite Fore Left in the paddock. Jockey Mario Gutierrez said, "I thought I was going to be the winner. But then he got a little bit tired at the end. But he'll bounce back."