The co-feature race on Saturday at Saratoga was the $350,000 Alfred G. Vanderbilt Handicap (G1), one of the premier races for older sprinters on the east coast. A field of 6 went to post in this 6 furlong main track event under sunny skies and temperatures in the high 80's, with 34,517 fans in attendance. Mitole was sent off as the 1-2 favorite, winner of his last 7 starts including the Churchill Downs (G1) and the Metropolitan Handicap (G1). In to challenge him included 7-2 second choice Firenze Fire, 5th in the Metropolitan, and 11-2 third choice and last year's winner, Imperial Hint, 3rd in both the Breeders' Cup Sprint (G1) and the Dubai Golden Shaheen (G1).

Jockey John Velazquez sent 10-1 Strike Power to the front exiting the chute through an opening quarter of 21.77 before Imperial Hint took over through a half in 44.21 while pressed by Mitole and stalked by Strike Power. Entering the lane, jockey Javier Castellano asked Imperial Hint to open up and he did, drawing off to a 3 1/2 lead midstretch through 5f in 55.82. 30-1 longest shot Diamond Oops put in a late rally from 5th but Imperial Hint cruised to a 4 length win in a new track record time of 1:07.92, 12/100 seconds faster than the previous record owned by Spanish Riddle and Speightstown. It was another 3 1/2 lengths back to favorite Mitole third.

The Jim Dandy Stakes also on the card 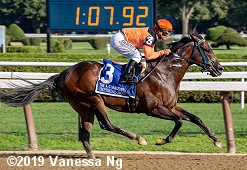 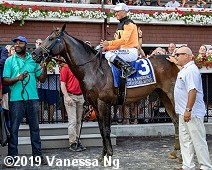 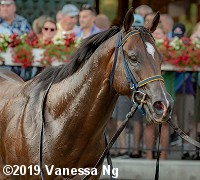 Left: Imperial Hint in the winner's circle. Winning trainer Luis Carvajal Jr. said, "This horse keeps surprising me and surprising everybody. We were worried a little bit. Mitole is a very nice horse. He won (seven) races in a row. It's an amazing feeling. I couldn't believe what was going on around the turn, but he's a really good horse. He has a lot of heart. He doesn't have a big body, but he has a lot of heart. When I looked at the times, my hairs stood up. Last year, he gave me my first Grade 1, and this year he breaks the track record. It's an amazing feeling, especially with my family here. He has a lot of heart, every time he works he has bullet works. It's not like I want to work bullet works, but he does it himself. I thought I would need one or two more works."

Right: Imperial Hint heads back to the barn after the race. Winning jockey Javier Castellano said, "He's an amazing horse. He did it again. It's very impressive. He did this last year in the same race. It's unbelievable. He's a very good horse and I always have a lot of confidence in him. He's a little horse with a big heart. He's not a huge horse, but he has a lot of talent. I knew they were going pretty quick early in the first part of the race. I had a perfect position in the race tracking them. Turning for home, the way he did it was very impressive. He wanted to go. He was feeling good and gave me everything he had today." 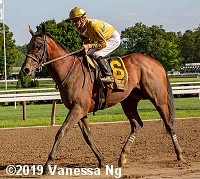 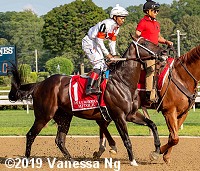 Right: Third place finisher and beaten favorite Mitole in the post parade. Jockey Ricardo Santana Jr. said, The track inside wasn't too good for us with the post and the weight. My horse ran hard. He's a hard-trying horse. I just took my chance, but we'll see him in the next race."


The $250,000 Bowling Green Stakes (G2) featured a field of 12 older horses going 1 3/8 miles around 3 turns of the inner turf course. Last year's winner Channel Maker was sent off as the 5-2 favorite off his 4th place finish in the Manhattan (G1) after winnng the Man O'War (G1). In to challenge him included 7-2 second choice Ya Primo, in from Chile as the winner of the Gran Premio Latinoamericano (G1) and the El Derby (G1), and 4-1 third choice Arklow, 2nd in the Belmont Gold Cup (G2). 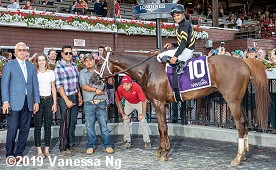 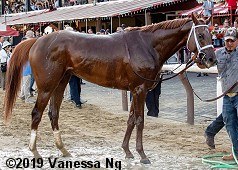 Left: Channel Cat in the winner's circle. Winning trainer Todd Pletcher said, "We wanted to get away cleanly and get some position going into the first turn, and it's not a real long run going into the first turn going 1 3/8. We didn't want to get hung out on three turns, but he kind of caught a flyer and relaxed, and Luis was riding with so much confidence. When you make a decision like that, sometimes it works out. It was unfolding the right way. I was a little concerned when they turned up the backside. Argonne put on a little earlier pressure and I was hoping Luis could steal another quarter mile or so before he had to start engaging. So, to his credit, he put in a long and sustained run.

Right: Channel Cat heads back to the barn after the race. Winning jockey Luis Saez said, "He's a game horse. He fought and took the lead and when they came to him in the stretch he kept fighting. I know a couple horses had a little speed, but he put me in that position. I knew he had a shot to win the race. I saw them coming, but he responded and got to the wire first." 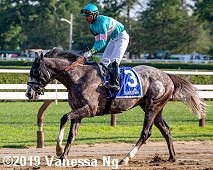 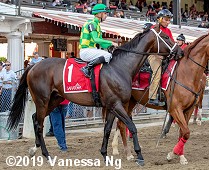 Left: Second place finisher Ya Primo returns after the race. Jockey Jose Ortiz said, "It was a good trip. I felt they backed it up a little bit down the backside and it could have cost me the race. I was in a good position and had a good opening. It was a great job by Chad, I think with this start under his belt he will be a contender in the Sword Dancer." 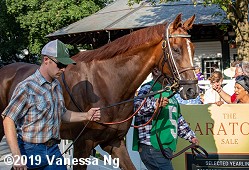 On to the Jim Dandy Stakes also on the card