There were three graded stakes contested on Saturday at Saratoga, with 34,517 fans in attendance. Conditions were excellent with sunny skies and temperatures in the high 80's at the historic oval.

The $600,000 Jim Dandy Stakes (G2) is the major local prep for the Travers (G1) to be run 4 weeks later. A field of 6 three-year-olds contested this 1 1/8 mile main track test, with Wood Memorial (G1) winner Tacitus sent off as the 8-5 favorite off his 2nd place finish in the Belmont Stakes (G1) after placing 3rd in the Kentucky Derby (G1). In to challenge him included 11-4 second choice Global Campaign, winner of the Peter Pan (G3), and 3-1 third choice War of Will, winner of the Preakness (G1) but 9th in the Belmont.

Tacitus stumbled badly at the break under Jose Ortiz and was last early, as jockey Tyler Gaffalione sent War of Will to the lead first time by and he set fractions of 24.89, 48.80, and 1:12.43 while pressed by 9-2 fourth choice Tax and stalked by Global Campaign. Entering the stretch, War of Will tired allowing Tax to inherit the lead through 1 mile in 1:36.59. Kept to task by Irad Ortiz Jr., Tax held off fast-closing favorite Tacitus to win by 3/4 length in 1:49.28. It was a long 3 3/4 lengths back to Global Campaign third. 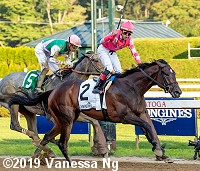 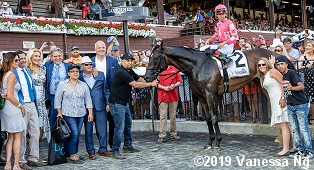 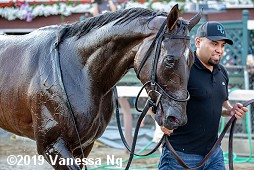 Left: Tax in the winner's circle. Winning trainer Danny Gargan said, "We broke running. The four took back and the six ran off. We got the perfect trip and it worked out. We got to stay off the rail. If he comes out of this well, we're in the Travers. I think he likes this track and he likes it here, so that's something we're pushing towards and hoping we make. If you take the Derby out, he's run as good as anyone all year. With the right trip and the right situation, he can be right there. Our game plan was to sit second or third the way. We thought Global Campaign would be in front and he didn't go and War of Will went flying like that. did the right thing and waited. He rode the perfect race today, he really did. His last work here the other day was spectacular, it was electrifying, and this is the fittest I've ever had him. I knew he would dig in today."

Right: Tax heads back to the barn after the race. Winning jockey Irad Ortiz Jr. said, "He's a nice horse. We know we had a shot. We got beat by Tacitus in the Belmont. He was doing much better this time. He was 100 percent, so it's exciting to cross the wire in front in this kind of race. When [Global Campaign] didn't break that sharp, I changed my plan. I just decided to go. I told myself, 'I don't want to be down on the rail.' When I got outside in the clear, I held it. That was my plan. I didn't want to be inside. I thought I was going to have the other horse as a target, but he didn't break, so I decided to go. We never expected War of Will to be in front." 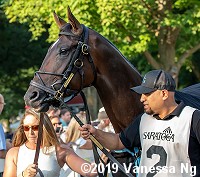 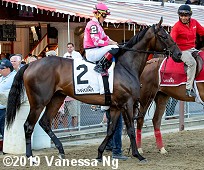 Left: Tax in the paddock. Gargan added, "He's a gelding, so he will get better with age. When a horse like this just matures and gets bigger and stronger, he can be any kind of horse at the end of the year. I'm really, really happy with him. We glued his shoes and changed a few things that we were doing with him and he just looks bigger, stronger and training more aggressive. He's 4 or 5 lengths better than he was going into any of his races, and it worked out today. I think 1 1/8 might be better, but I don't think he was getting caught in this race. It looked like he was going to get him and he didn't go by him. It's all how the race runs. He doesn't have to have the lead, he can stalk and I think this track favors horses like him."

Right: Tax heads out for the post parade. Ortiz added, "Today, it felt much better than last time [fourth in the Belmont]. When I let him run, he picked it up. I let him go and when I asked and said, 'Let's go,' he was feeling great. (The Travers is) next, I think. I hope. He's a nice horse. He always shows up and he's doing good." 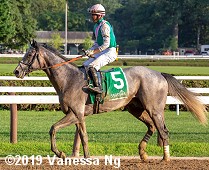 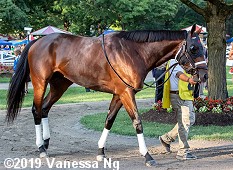 Left: Second place finisher and beaten favorite Tacitus returns after the race. Jockey Jose Ortiz said, "I was thinking to be very aggressive today on him going into the first turn. I wanted to break good and make everybody use a little bit at the first 1/16 mile. Unfortunately, he stumbled and after that, I used him a little bit just to bring him up to the field and when we passed the 5/8 pole, I saw an opening on the inside with War of Will at the front. I decided to let him go and let him catch up with the leaders a little bit by the half mile. The rail opened for me by the 3/8 pole. I felt like it was too early to take that chance. I think the stumble cost me a lot, for sure." 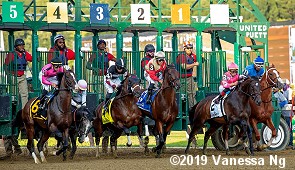 The horses break from the gate for the Jim Dandy Stakes. Mark Casse, trainer of 5th place finisher War of Will (post 6) said, "No excuses. He broke good. He kind of ran off down the backside, but still, no excuses. He's tired, but I didn't think he needed much. He had a great trip. I don't think you could have asked for it any better. He got out-run today."