The $1.5 million Belmont Stakes (G1), contested at 1 1/2 miles, one lap of the Belmont Park main track for 3-year-olds, is the third jewel of the Triple Crown, with the "small crowd" of 56,217 enjoying ideal racing weather, under partly cloudy skies and a post time temperature of 69 degrees. With no Triple Crown on the line, a field of 10 went to post on Long Island for the 151st "Test of the Champion". A new record handle of over $102 million was set, the highest in a non-Triple Crown year.

Tampa Bay Derby (G1) and Wood Memorial (G2) winner Tacitus was sent off as the 2-1 favorite off his 4th place finish (moved up to 3rd) in the Kentucky Derby (G1). In to challenge him uncluded 7-2 second choice War of Will, winner of the Preakness Stakes (G1) after a troubled 8th place effort (moved up to 7th) in the Derby, and 7-1 third choice Intrepid Heart, 3rd in the Peter Pan Stakes after winning his first 2 career starts. 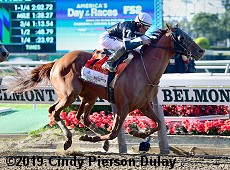 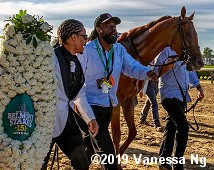 Left: Sir Winston in the winner's circle. Winning trainer Mark Casse said, "He's an amazing little horse. If at this time last year, if you had asked me to rate our Top 20 2-year-olds, he would have been about 16th or 17th. But I'm very proud of him because he's kind of what our operation represents, and that is I feel like we develop horses. You'll see me a lot of times, we run horses. I think the first two times he ran, he got beat ten or 20 lengths. And I can remember having a conversation with Mr. (owner-breeder Tracy) Farmer up at Saratoga, and he didn't run very well. I said, 'Don't give up on him. It's crazy, but I see something. Let's just give him some time to develop.'"

Right: Sir Winston heads back to the barn. Assistant trainer Jamie Begg added, "He's not a big horse but he's really filled out in the last little bit, even Ýeven leading into this race since the Peter Pan. And really, like Mark said, we've had an idea from awhile back the way he would close in these races, he would always show flashes of brilliance without ever having anything, you know what I mean, be able to put it all together. When we put Joel on, I knew he had no problem falling right out of it and coming running. So I think they really suit each other, and he rode him very well today." 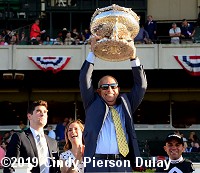 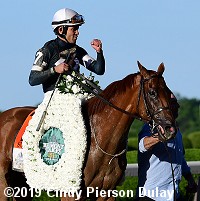 Left: The trophy celebration with the Belmont Stakes trophy with trainer Mark Casse holding the trophy. Casse added, "I saw where (stablemate) War of Will was, and to me, I could tell that he was struggling a little. Because normally, he's on the bit and wanting to go, and I thought maybe around the half-mile pole, 5/8ths pole I thought he was struggling a little. And then I looked for Sir Winston and Joel had ducked inside, and I Ýhave to be honest, I started hollering for Sir Winston at that time. I could kind of see where War of Will was struggling, and he wasn't going to get anything."

Right: Sir Winston in his flower blanket. Winning jockey Joel Rosario said, Ý"He broke real good. I got into the spot where I wanted to be. I was able to save ground the whole time. I was in a good spot. After that, it was all him. I knew he was going to win the race, the way he was moving. I rode him twice. I think he's right there [with the other top 3-year-olds he's ridden]." 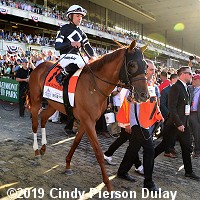 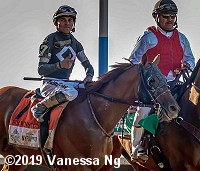 Left: Sir Winston heads to the track before the race. Casse added, "So we had him at our farm all winter long, he had been at Woodbine, and he had gotten better at Woodbine and he was running well on the synthetic. I said to everybody all week long, I said, 'If there's a horse that will go a mile-and-a-half, it's going to be Sir Winston. This horse ran the last quarter of a mile in :23 2/5.' We schooled him the other day in the paddock, and Jamie says, "He's really quiet and he doesn't ever do anything." [So] we school him. We were walking him back. I thought he was going to get loose. He was diving through the air."

Right: Sir Winston parades for the fans after the race. Owner-breeder Tracy Farmer was not in attendance. Casse said, "He was (under the weather this week). He's actually better, but just wasn't able to fly. It's a shame, because I know he loves running in New York, and I know this race will mean everything to him. This is one of the first horses I ever trained for him. He's very good friends with [John] Oxley. [Farmer] and his wife, Carol, and Mr. Oxley kept saying, 'You should give Mark a horse.' One day, he said, 'Look, if you see anything, I'll buy it.' So I called him with a couple and we bought a few. He goes, 'I have a couple homebreds. Can I send them to you?' I said, Sure.' One of them was Sir Winston. So we've only been training for him now, two years." 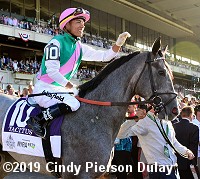 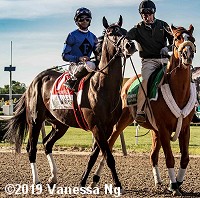 Left: Second place finisher and beaten favorite Tacitus heads out to the track. Trainer Bill Mott said, "It looked like he kind of ducked in a little bit in mid-stretch at the eighth pole. He came running and finished up the race good, but it looked like he just got going too late. We did have a bit of a wide trip, which you never like. He came running and looked like he was traveling better than anybody. We planned to try and be in contention at the quarter-pole and he was. He just couldn't get there. He didn't really keep a straight line all the way through the lane. He kind of veered in a little bit, which doesn't help. I can't give any other excuses other than we'll see how much ground we lost."

Right: Third place finisher Joevia in the post parade. Trainer Greg Sacco said, "I didn't think he'd cave with those [slow] fractions. He showed a lot of tenacity. Maybe about the eighth pole, I think my blood pressure went through the roof. We knew he had to improve. We thought he would. Of course, training is one thing, but he put it all together last time in the Long Branch. It was in lesser company, but he did it effortlessly. He had to step up to the plate today and he did."

The horses break from the gate for the 151st Belmont Stakes. Jockey Jose Lezcano aboard pacesetter and eventual third place finisher Joevia (post 1) said, "My horse broke very well. I let him go to the lead because the inside felt very good to me, especially today. He tried hard. I think he's become a very nice colt. He's coming around."