With the Sunshine Millions stakes program changing last year to an all-Florida affair at Gulfstream Park, Santa Anita revamped its stakes schedule, packaging two graded stakes and four stakes for California-breds on one day. This year California Sunshine Millions Day was run a week after its Florida counterpart, with 14,355 fans at the Arcadia oval under overcast skies with the temperature in the mid 60's. Earlier rains downgraded the main track to wet-fast with the turf course rated good. 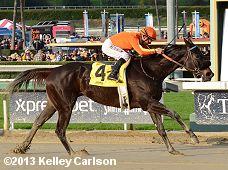 The highlight race on Saturday was the $250,000 Santa Monica Stakes (G1) for older fillies and mares sprinting 7 furlongs on the main track. Teddy's Promise, winner of the Kalookan Queen Stakes last out, was sent off as the 3-2 favorite in the field of 7 over 7-2 second choice Belle of the Hall, unraced since fourth in the Breeders' Cup Filly and Mare Sprint (G1), and 5-1 third choice Kindle, off her second place finish in the Monrovia Stakes (G2).

Jockey Edwin Maldonado sent Kindle to the lead exiting the chute and she set fractions of 22.66 and 45.69 while stalked by 11-2 fourth choice Distracting and favorite Teddy's Promise. Entering the lane, Kindle continued to lead through 3/4 in 1:09.73 but Teddy's Promise came out three wide and rallied to win by 3 lengths over late-running 11-1 Sugarinthemorning in 1:22.64 over the wet-fast sealed track. It was another 1/2 length back to pacesetter Kindle third.
Results Chart 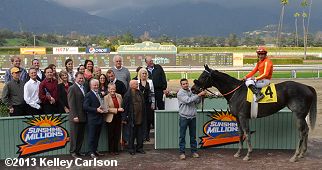 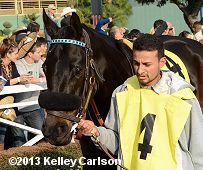 Teddy's Promise in the winner's circle. Winning jockey Victor Espinoza said, "She set up very well for me. She broke a little slow out of the gate but it was good for me. That's what I wanted, a chance to move to the outside. There were two horses in front of me and I just tracked them. At the 3/8 pole I kind of just let her do her own thing, and turning for home I just let her run. She's an unbelievable filly and I know Ron is the best in training her. When she's good she can beat anybody. She and I have been getting along the few times I rode her. I know how she likes to run and she ran big in the last race and then again today. Hopefully she has come back as herself."

Teddy's Promise in the paddock. Winning trainer Ron Ellis said, "She's back in form. I think that last race kind of got her a lot of confidence. She's really starting to relax and mature mentally. Physically, she's always been quite a specimen, but mentally she's really turned a corner for us. I certainly don't think the mud hurts her. Her last one was on a little bit of a wet track. This was a muddier track today, but she won a Grade I on a fast track, so I think here at Santa Anita on the regular dirt it's a little bit better fit." 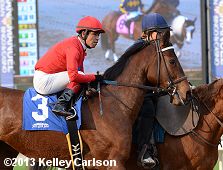 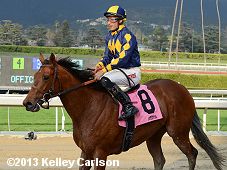 Right: Third place finisher Kindle returns after the race. Trainer Gary Mandella said, "Teddy's Promise is a filly that has tactical speed and I expected she wouldn't let my filly get away for too long. (Distracting) did a some of the work for her early and that wasn't a surprise either. I knew we would have to earn it; we wouldn't be given anything, and I couldn't be prouder of my filly. That's as good as she can run going 7/8. We knew we might be running her a little bit past her optimal distance; that's what we proved today. But she also proved she has a lot of heart. A perfect, trip, a perfect ride. That's the best I can expect from this filly." 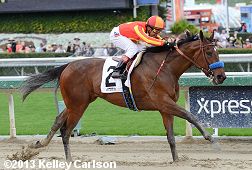 Kicking off the stakes action on Saturday was the $100,000 Santa Ysabel Stakes (G3) for 3-year-old fillies going 1 1/16 miles on the main track. Scarlet Strike was sent off as the 3-2 favorite in the field of 5 off her close second in the Blue Norther Stakes after finishing third in the Hollywood Starlet (G1). In to challenge her included 2-1 second choice Heir Kitty, fifth in the Blue Norther, and 3-1 third choice Escape Act, fourth in the Blue Norther.

Jockey Martin Garcia sent Escape Act to the lead first time by and she set fractions of 22.50 and 46.26 before 6-1 fourth choice Fiftyshadesofhay took over through 3/4 in 1:10.80. Entering the stretch, Fiftyshadesofhay was drawing clear, and finished up 5 3/4 lengths ahead of Heir Kitty in 1:42.89. It was another 1 1/2 lengths back to favorite Scarlet Strike third.
Results Chart 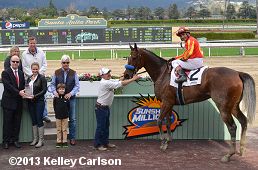 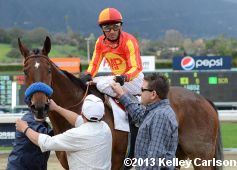 Left: Fiftyshadesofhay in the winner's circle. Winning jockey Rafael Bejarano said, "I had to move a little early today. The pace was fast but the way the track played today was really fast. I was really comfortable with my horse, and when I saw (Escape Act) was done at the 3/8 pole I let my horse go and open up 3 or 4 lengths in the stretch because I knew they weren't going to catch me."

Right: Fiftyshadesofhay returns after the race. Winning trainer Bob Baffert said, "She can run all day long. She's fast and she wants to be out there. We had a big advantage the way the track is playing today. We were very high on her early in the year and it's taken her a while to come around. She has a high cruising speed. She's not going to kick on; she's not going to be quick enough for that, but she can go 1 1/8, 1 1/4 miles. She can go really far. Today she got the trip. The turf race was an experiment that didn't work, and it worked out today." 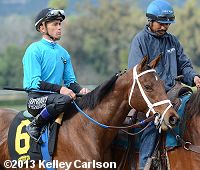 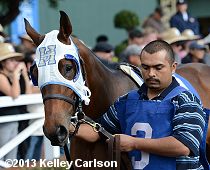 Right: Third place finisher and beaten favorite Scarlet Strike in the paddock. Jockey Joe Talamo said, "We had a pretty good trip today. The track is pretty fast. Wherever they want to race, they just kind of seemed to stay there. Obviously, I thought we were going to win. We were pretty high on her coming in, but the track's so quick today, it's hard to make up any ground. They all seemed to run in place." 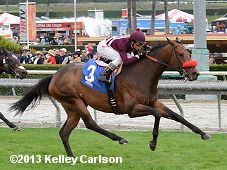 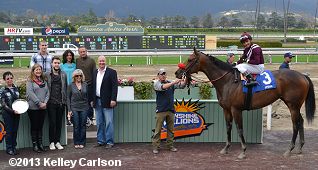 The first of four stakes races on Saturday for California-breds was the $100,000 Valentine Dancer Stakes, featuring older fillies and mares going 1 mile on the turf. 23-1 longest shot Toomanytomatoes set early fractions of 24.31, 48.30, and 1:11.92 over the good turf while pressed by 12-1 Dancingtothestars. Dancingtothestars took the lead in midstretch through 7/8 in 1:23.70, but 4-5 favorite Tiz Flirtatious, 6th early, rallied 4 wide to win by 1 3/4 length in 1:35.17. It was another 1 1/4 length back to pacesetter Toomanytomatoes third.
Results Chart

Winning jockey Rafael Bejarano said, "She's been running really well the past few races. I was hoping there would be a little speed today, but there wasn't. Before the first turn she was rank because we were going so slow, but once she relaxed she picked it up. This horse has a lot of experience and she ran good."

Winning trainer Marty Jones said, "They were going slow the first part, so she was still tugging a little bit, but when she switches off and relaxes, she's really got a great kick. Hopefully we can get back into graded stakes after this. I was a little concerned about the rain the last couple days, no doubt. But this turf seems to handle the weather good, and the rain cleared out of here just in time to really put us at ease." 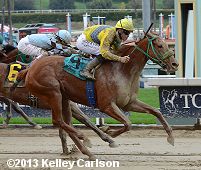 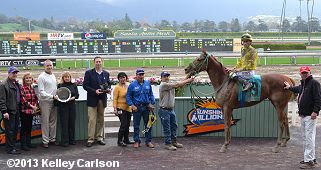 Winning jockey Garrett Gomez, who swept both $300,000 stakes on the card, said, "My horse just kept going at the same speed and when I turned for home I told her to go and I picked off a couple of horses. Then all of a sudden I started to pick them off left and right, but she never really accelerated much. She just kept doing what she was doing and the horses up front were looking to be done. I just kind of tried to pull out whatever tricks I had up my sleeve to try and accomplish what we got done."

Ron Glatt, who saddled for trainer Ed Moger Jr. said, "I didn't tell Garrett anything, really. He knew she was one of those horses that would come from out of it. You never know what to expect in this mud. The race track's been playing to speed earlier. You never know in this business. She always tries, this filly." 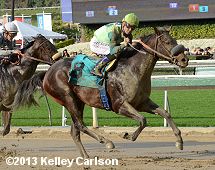 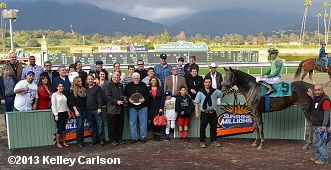 Winning jockey Garrett Gomez said, "This little horse was running. I cranked him up, he settled in behind them and he traveled well. He was really turned off all the way on the backside and when I had to get him up a little bit he did so willingly. When I angled him out he really did go to running and I got him to switch leads. He ran down Julien's (Leparoux) horse. Julien's horse wasn't lying down, my horse was actually running."

Winning trainer Paul Aguirre said, "I thought (Gomez) was crazy where he put him, but Garrett, he's really a genius on the back of a horse. Nobody else can get a horse to run like that. My quality (of horses) has dipped a little bit, but with this, hopefully it'll come back up. If you hold this horse and make one run, he'll run every time, and he'd run once a week if you'd let him. Nothing seems to bug him. He's right back in the feed tub and ready to run again." 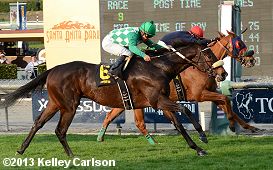 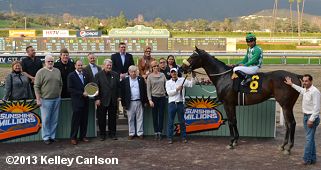 Winning jockey Martin Garcia said, "He's been unlucky the races before, but today he ran a really good race. I had so much horse when we turned for the top of the stretch but he felt lonely and started looking for company. I didn't think the other horses could have passed me at anytime because I had a lot of horse. He was waiting for company, and as soon as they came he started running again."

Winning owner-breeder John Harris said, "It's pretty amazing. It's hard to bring a horse back from a bow. You have patience. We did a lot of things, took a lot of time and it all came together. He really shouldn't have been a favorite. He's never been on turf, he's never been 1 1/8 miles, he had a lot going against him. But he had a consistent form. He ran fourth in the Breeders' Cup Dirt Mile. We didn't know how this day would play out, but it worked well. A horse you've bred, you've stopped on, you've brought back, and you've had ups and downs. A lot of things have happened. When you win one like this, it's definitely exhilarating."