With the Sunshine Millions stakes program changing this year to an all-Florida affair at Gulfstream Park, Santa Anita revamped its stakes schedule and offered up promotions on the same day on the opposite coast, such as a beach chair giveaway, a handicapping contest, and a food truck festival in the infield. Conditions were ideal on Saturday at the historic Arcadia oval, with the crowd of 30,514 enjoying clear skies and temperatures in the upper 70's, with a fast main track and firm turf for the 2 graded stakes and 3 stakes for California-breds. 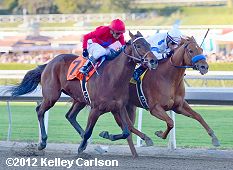 The highlight race at Santa Anita was the $300,000 Santa Monica Stakes (G1) for older fillies and mares sprinting 7 furlongs on the main track. Rumor, winner of the CERF Stakes at Del Mar and the Kalookan Queen Handicap at Santa Anita, was sent off as the 2-1 favorite in the field of 7 over 5-2 second choice Teddy's Promise, winner of the La Brea Stakes (G1) last out. Sugarinthemorning, second in the La Brea, was sent off as the 9-2 third choice on the tote. 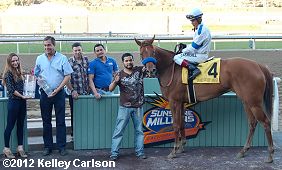 Winning jockey Joel Rosario said, "Last time, she was probably going a little too quick, but she was much better today – she was impressive. I kind of saw the other horse coming on the outside, so I just waited a little bit, but I knew she had a little more left because I let her go out easy early, and she did."

Winning trainer John Sadler said, "These races came up good for her so we thought we would be in the first two sprints (including the Dec. 31 La Brea Stakes). We won these races last year with Switch and I think this is a good sprinting filly, a good quality filly. It's pretty exciting to have her win a Grade 1. I felt she's capable and we got a good trip today. I thought she'd run well in here today." 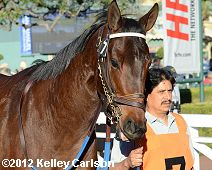 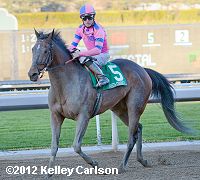 Left: Second place finisher Sugarinthemorning in the paddock. The 9-2 third choice stalked the pace under jockey Rafael Bejarano, then closed late to get second beaten a neck. The Ron McAnally trainee improved her record to 5 wins, 3 seconds, and 1 third in 12 starts, earning $370,334 for owner-breeder Stephen Weissman and Samantha Clement. 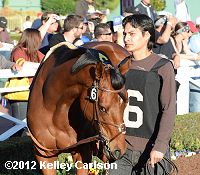 Sixth place finisher and beaten favorite Rumor in the paddock before the race. The 2-1 favorite contested the early pace under jockey Mike Smith, but tired through the stretch to finish sixth beaten 7 3/4 lengths. The Richard Mandella trainee has a record of 4 wins, 3 seconds, and 0 thirds in 7 starts, earning $201,718 for owners Ramona Bass, Claiborne Farm, and Adele Dilschneider. 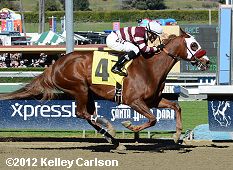 Kicking off the stakes action on Saturday was the $100,000 Santa Ysabel Stakes (G3) for 3-year-old fillies going 1 1/16 miles on the main track. Charm the Maker was sent off as the even-money favorite in the short field of five, winner of the Sharp Cat Stakes and then a close second in the Hollywood Starlet (G1) last out at Hollywood Park. In to challenge her included 3-1 second choice Lady of Shamrock, off her win in the Blue Norther Stakes, and 7-2 third choice Killer Graces, winner of the Hollywood Starlet.

Jockey Martin Pedroza sent 11-1 longest shot Willa B Awesome to the lead first time past the stands and she was allowed an uncontested lead of 2 lengths while setting fractions of 23.23, 46.80, and 1:10.84. Entering the stretch, Killer Graces, 3rd early, attempted to close but Willa B Awesome had something left, powering away late to win by 3 1/2 lengths in 1:41.73. It was another 3 lengths back to Lady of Shamrock third, while favorite Charm the Maker checked in fourth.
Results Chart 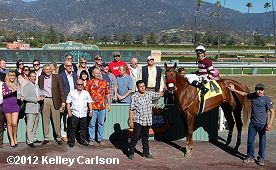 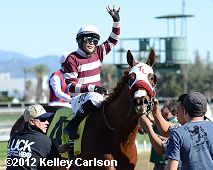 Willa B Awesome in the winner's circle. Winning jockey Martin Pedroza said, "My plan was, there was no speed on paper, so if they would chase me for a little bit, I could pull her away early. If the other horses had to come from behind, I figured I'd have a pretty good chance to win the race. It was just the way I planned it. I took advantage of her speed. I put her where she wanted to be, and then I said, ‘Come and get me.'"

Winning trainer Walther Solis said, "It's pretty nice seeing her break like the way she did today. When they scratched the two horses on the inside I said, ‘We'll change tactics.' I was thinking about coming from third or fourth, but scratching the speed, I told Martin, ‘Let's go to the lead and have them catch us.'" 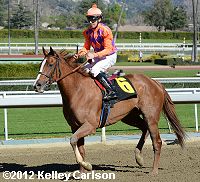 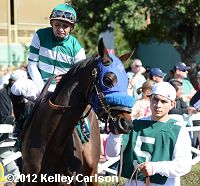 Left: Second place finisher Killer Graces returns after the race. The 7-2 third choice sat 4 lengths off the early pace under jockey Joe Talamo, came out wide for room and rallied to get 2nd beaten 3 1/2 lengths. The Jerry Hollendorfer trainee improved her record to 3 wins, 4 seconds, and 0 thirds in 9 starts, earning $414,830 for owners Dan Borislow, Gillian Campbell, and Steve Melen.

Right: Third place finisher Lady of Shamrock in the paddock before the race. The 3-1 second choice raced 3 lengths off the pace under jockey Mike Smith, but tired late to finish 3rd beaten 6 1/2 lengths. The John Sadler trainee improved her record to 2 wins, 0 seconds, and 1 third in 5 starts, earning $90,700 for owner Hronis Racing LLC. 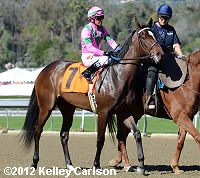 Fourth place finisher and beaten favorite Charm the Maker in the post parade. Her jockey Rafael Bejarano said, "I wanted to come from behind and make a good run. I was wide into the first turn because (Killer Graces) pushed me out. I couldn't do anything. I tried to get my horse to come in, but (Killer Graces) pushed me out. Then I tried to come between horses because I didn't want to get pushed out any further." 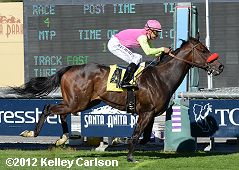 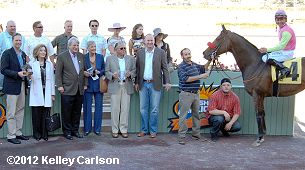 The first of three stakes races for California-breds was the $100,000 Sensational Star Stakes for older horses sprinting about 6 1/2 furlongs on the downhill turf. 3-1 third choice Ain't No Other battled on the front end with 14-1 longest shot My Summer Slew through quick fractions of 22.22 and 43.92. Entering the stretch, even-money favorite Compari, 4th early, came through between horses to win going away by 1 1/4 lengths over My Summer Slew in 1:12.02 over the firm turf. It was another 1/2 length back to 5-2 second choice Red Defense third.
Results Chart

Winning jockey Mike Smith said, "He ran dynamite. I've ridden this horse before going a mile and a quarter, and he relaxed really well for me that day, so I figured going 6 1/2, I asked Marty (Jones), 'If I just come out of there and put him where he's comfortable, will that work?' And he said, ‘Yeah, he's a class horse. You just put him where he's in a good rhythm.' He was just so relaxed laying third. He was pricking his ears, so I knew he was going to fire. Midway through the turn, I could see the horse that was second getting out just a bit, and a lot of times when they hit that dirt, they really spread it. So I banked on it, and it worked."

Winning trainer Martin Jones said, "He's kind of gotten to where he's relaxing more in his races. Early in his career he was real aggressive and now it seems like he's a lot more settled. Even routing the other day he was real relaxed. He's a lot more versatile than he used to be and when you get a trip like that it sure helps. That horse just floated out and he just got a dream run. He's a nice horse. He's all heart. It's nice to see him get back on track with a couple wins." 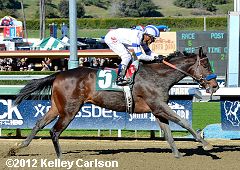 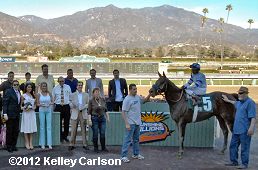 A field of 6 California-bred older horses went 1 1/16 miles on the main track in the $100,000 Crystal Water Stakes. 5-1 Bluegrass Reward battled for the lead with 9-2 Macho Dorado through quick fractions of 22.22, 44.97, and 1:09.20 while as many as 6 lengths clear of the rest of the field. Bluegrass Reward tired and dropped back on the turn as Macho Dorado led the field to mid-stretch getting the mile in 1:34.72. However, 2-1 second choice Holladay Road, last early, closed late on the outside to win going away by 2 1/2 lengths in 1:41.25. It was another 3 1/2 lengths back to 7-1 Spud Spivens third, while 3-2 favorite Thirtyfirststreet was fourth.
Results Chart

Winning jockey Rafael Bejarano said, "I knew there was going to be plenty of speed in the race. I got comfortable with my horse, and knew I could be patient a little bit. When I saw the No. 6 horse and the other horse, they tried to soften each other up, so I relaxed and waited a little bit. From the 1/2 mile pole, everybody spread out, so I tried to go to the rail and make a little move, and that was it."

Winning trainer Julio Canani said, "I'm too old to be nervous. I saw speed and told (Rafael Bejarano) to let him sit comfortable and at the 1/2 mile pole ask him a little bit. I knew he would do the job." 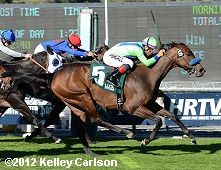 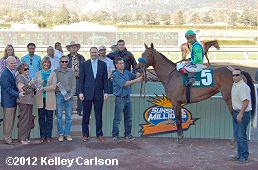 The $100,000 Valentine Dancer Stakes featured Calfornia-bred older fillies and mares going 1 mile on the turf. 7-1 California Nectar went to the lead first time by and set fractions of 23.11, 47.16, and 1:10.91 while stalked by 8-5 favorite Halo Dolly. The pair continued to battle to mid-stretch through 7/8 in 1:22.59 as a cavalry charge ensued. 8-1 Chokecherymary, 6th early, closed late to win by 1/2 a length over California Nectar in 1:34.42. It was a neck back to 7-2 second choice Secret Cove third, and just a nose back to Halo Dolly fourth.
Results Chart

Winning jockey Corey Nakatani said, "I've watched some of her races, and she's a little high-strung and wants to do a little too much too early. All I did was get along with her, keep her happy, and when I asked her, she saved ground. When I moved her outside, she kicked like she's supposed to. What a job Gary and the guys are doing with her."

Winning trainer Gary Mandella said, "I wouldn't blame anybody for betting against her today, because her last mile grass race here looks really bad on paper. But if you watch it on video, she was tossing her head all over the place going into the first turn, and she does that sometimes. When she's calm and runs like she did today and settles back and relaxes the first part of the race, she's got a pretty significant turn of foot, and her last two races have really proven that."