On Saturday, Magna Entertainment Corporation hosted the seventh annual Sunshine Millions, featuring eight stakes races for horses bred in California and Florida only, with four races each run at Gulfstream Park in Hallandale, Florida and Santa Anita Park in Arcadia, California. The weather was warm and sunny with the main track fast and the turf course firm at Gulfstream, but cool and overcast after rain earlier with the Pro-Ride synthetic track fast and the turf course good at Santa Anita. 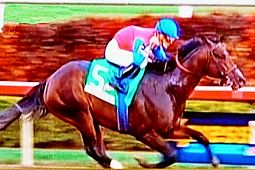 The highlight event of Sunshine Millions day is the $1 million OBS Sunshine Millions Classic for older horses going 1 1/8 miles on the main track. Delightful Kiss was sent off as the 2-1 favorite in the field of 12, exiting a victory in the Hal's Hope Stakes. 6-1 Finallymadeit battled for the lead with 11-1 It's a Bird through fractions of 23.78, 48.08, and 1:12.56 while Delightful Kiss sat at the back of the field early. Turning for home, Finallymadeit tired allowing It's a Bird to open up a 3 length lead by mid-stretch. 4-1 Dry Martini and Delightful Kiss rallied late from well off the pace but It's a Bird cruised under the line 5 1/4 lengths in front in 1:49.35. A blanket finish ensued for place, with Dry Martini finishing second by a nose over Delightful Kiss, in turn a neck in front of 48-1 longshot Dream Maestro fourth.
Results Chart

Winning jockey Julien Leparoux said, "We got the perfect race. We kept it nice for him and he did the rest. He got stronger as the race went on." Trainer Martin Wolfson added, I wanted to be close to the pace right from the start," said Wolfson, who took over It's a Bird's training early last summer. "Finallymadeit was the one I was afraid of, but I knew once my horse got by him I knew he'd get stronger and stronger." 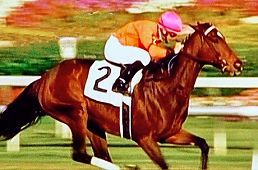 Winning jockey Aaron Gryder said, "I wasn't worried about having the lead because I knew we would get an opportunity to get in there. I just sneaked in behind Edgar (Prado on Julia Tuttle) and got myself a nice spot. She really made her move at the 1/2 mile pole, I never felt any pressure. How could you with a horse like this?” Trainer Greg Gilchrist added, "The race set up perfectly. I figured someone would get anxious and she just tracked them. I knew she didn't need the lead." 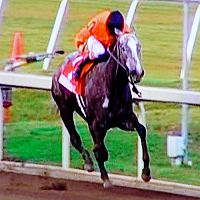 A field of 12 went to post in the $300,000 Hill 'N' Dale Sunshine Millions Filly and Mare Sprint. Lovely Isle was the 5-2 choice on the toteboard, exiting a victory in the Kalookan Queen Handicap at Santa Anita. Jockey Robby Albarado sent 6-1 High Resolve to the front and she set a pace of 22.08 and 45.22 while being stalked by Lovely Isle the whole way. At the top of the lane, High Resolve kicked clear, opening up a 2 1/2 length lead in midstretch after 5f in 57.56. 7-1 Dubai Majesty rallied from 8th to pass the tiring Lovely Isle but High Resolve finished 2 1/4 lengths in front in 1:10.55. It was 3 lengths back from Dubai Majesty to beaten favorite Lovely Isle.
Results Chart

Winning trainer Greg Gilchrist said, "I was confident. Her last two races at Santa Anita (second in stakes races) are probably better than most people realize. She kept getting hooked on the lead.” 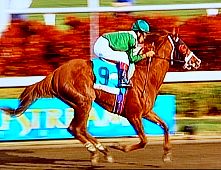 Kicking off the stakes action at Gulfstream Park was the $250,000 Sunshine Millions Dash for 3-year-olds sprinting 6 furlongs. Birdonawire Stakes winner You Luckie Mann was the 6-5 choice in the field of 10, exiting a runner-up finish in the Spectacular Bid. You Luckie Mann battled for the lead with 7-1 Ju Jitsu Jax through a quarter in 22.23 and a half in 44.96, while being stalked by 12-1 This Ones For Phil. Turning for home, This Ones For Phil came out four wide to pass the pacesetters. Through the stretch, This Ones For Phil opened up to win by 2 1/4 lengths over You Luckie Mann in 1:09.10. It was a long 5 1/4 lengths back to 6-1 Kelly Leak third.
Results Chart

Winning trainer Richard Dutrow Jr. said, "That horse ran huge. The Fountain of Youth is around one turn five weeks from now. That should fit him good." 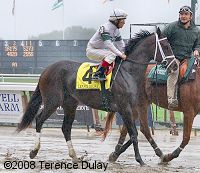 The highlight race at Santa Anita Park was the $500,000 Sunshine Millions Distaff, contested before a live audience of 22,155. A field of 12 older fillies and mares went to post in this 1 1/16 mile Pro-Ride feature, with Leah's Secret sent off as the 6-5 favorite exiting wins in the Chilukki at Churchill and the Top Flight at Aqueduct. 20-1 Waveline set the pace of 23.50, 46.50, and 1:11.64 with 11-1 Bai and Bai stalking her length behind. Leah's Secret sat in sixth saving ground the whole way. Entering the stretch, Leah's Secret moved up to challenge, and shook off the pacesetters at the 1/8 pole. She drew off late to win by 2 1/4 lengths over 11-1 Lady Railrider in 1:42.58. It was another 1/2 length back to 7-1 Unforgotten third.
Results Chart

Winning jockey Eibar Coa said, "She showed me last time out in New York that she was a really good horse. Today, she placed herself in a very good position and at the 1/4 pole, I thought I was on the best horse. Today, she had a little bit more left at the finish than she did last time.” Mike McCarthy, assistant to winning trainer Todd Pletcher added, "She brought her 'A' game today. A mile and a sixteenth is probably as far as she wants to go. She had plenty left in the tank today." 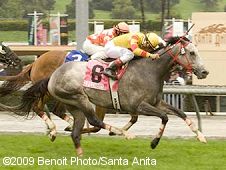 A field of 13 older horses went 1 1/8 miles in the $500,000 Sunshine Millions Turf. Soldier's Dancer was sent off as the 7-5 favorite off a close second place finish in the Tropical Turf Handicap at Calder. 13-1 Liberian Freighter set the pace of 23.76, 47.29, and 1:11.58 over the good turf course, with 36-1 Victory Pete stalking him to the outside. Soldier's Dancer was unhurried at the back of the field, saving ground around both turns. At the top of the stretch, Victory Pete took over the lead briefly, but he was passed by 9-1 Presious Passion inside the 1/8 pole. However, Soldier's Dancer closed with a rush down the center of the course to win by 1/2 length in 1:49.64. It was another 1 1/4 lengths back from Presious Passion to 53-1 longest shot Unusual Suspect third.
Results Chart

Winning jockey Rafael Bejarano said, "I really wasn't worried because he was so far back early. It's the style of the horse. He likes to come from behind like this. I always felt comfortable because I knew I had a lot of horse. I made a move from the 5/8 to the 1/2 mile to get my position. After that, he started running, and he has a big, big kick. The horse that ran second (Presious Passion) was very tough in the end. But my horse was coming at the right time to catch him." 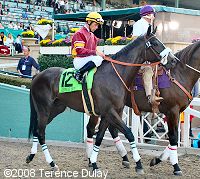 In the $300,000 Sunshine Millions Sprint, only 9 older horses went to the gate in this 6 furlong Pro-Ride feature, with El Conejo Stakes winner In Summation sent off as the 2-1 favorite. 8-1 Machismo led most of the way, getting fractions of 21.79, 44.34, and 56.17 while as many as 1 1/2 lengths in front of In Summation in second. Entering the stretch, In Summation moved out for the drive but failed to respond, tiring to finish fifth. 5-2 second choice Georgie Boy rallied on the inside to pass the pacesetter inside the 1/8 pole, pulling away to win by 2 1/4 lengths in 1:08.12. It was another 1 3/4 lengths back from Machismo to 26-1 Partywithlarryz third.
Results Chart

Winning trainer Kathy Walsh said, "The horse was a little rank the first part of it but Garrett was able to get him back where he needs to be." Jockey Garrett Gomez added, I knew the fractions ought to help him today. My only problem was going so short with his turn of foot. When he started building, my only option was to either go around or go inside. He's a long striding horse, and I really wanted to go around with him, but he wasn't traveling exactly the way I wanted. So I said I gotta go inside and it was perfect." 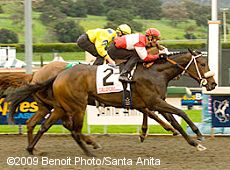 A field of eight 3-year-old fillies went 6 furlongs on the Pro-Ride in the $250,000 Sunshine Millions Oaks. Landaluce Stakes winner Emmy Darling was the 8-5 favorite exiting a close fourth in the Miesque at Hollywood. 22-1 Dancing Erin set the pace of 21.86, 44.90, and 57.10 while being stalked by 501 Ten Churros down the backstretch. 11-1 Beltene, seventh early, came four wide into the lane to get the win by a head over 7-1 Hooh Why in 1:09.16. It was another 2 lengths back to 12-1 Yodelady O third. Favorite Emmy Darling was wide throughout and never in contention, showing no rally late to finish seventh.
Results Chart

Winning jockey Joel Rosario said, "I thought I had a chance to win with this filly because she finishes well. Today, there was a lot of speed in the race and she relaxed very well and finished real good. She tries very hard and she's been running good every time." Trainer Jack Carava added, "This was a big step up for her, but I thought she was capable and she improved enough to have a chance. She'll probably run long, and so far she's done everything right."