The older turf divisions were featured at Woodbine on Sunday afternoon. The highlight of the card was the $300,000 Sky Classic Stakes (G2), a 1 3/8 mile trip over a rain-soaked, "yielding" E.P. Taylor Turf Course. 2004 Breeders' Cup Turf winner Better Talk Now shipped in from his Fair Hill, Maryland base and was sent off as the 9-5 favorite in a field of seven. He came into the race off a disappointing seventh place finish in the Arlington Million last time out, and is the first Breeders' Cup winner to race at Woodbine since 1997 Turf winner Chief Bearhart. In to challenge the favorite was 5-2 second choice Silver Whistle, second in the Sword Dancer at Saratoga in his last start, and 3-1 third choice Grand Couturier, third in the Sword Dancer in what was his first North American start after racing in France.

5-1 fourth choice Last Answer was allowed an uncontested lead on the clubhouse turn and down the backstretch through slow fractions of 25.78, 50.95, 1:15.58, and 1:40.52, while as many as 4 lengths clear of 6-1 Jambalaya who stalked the pace on a ground-saving path along the inside rail. Jockey Ramon Dominguez kept Better Talk Now near the back of the field for the backstretch trip. Turning for home, the pace quickened and with a furlong to go, Jambalaya poked his head in front after 1 1/4 miles in 2:05.42 as the pair continued to battle head to head for the final 1/16 of a mile. Better Talk Now was set down for the drive and was closing down the center of the course, and the three hit the line together in a three-horse photo for the win. After a brief examination of the photo, Better Talk Now had prevailed by a head over Jambalaya, who just nosed out Last Answer. It was a long 6 lengths back to Grand Couturier in fourth, while Silver Whistle disappointed in sixth. 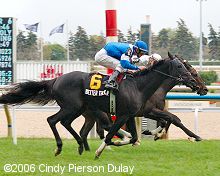 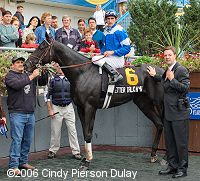 Better Talk Now in the winner's circle with trainer H. Graham Motion by his flank. Trainer Graham Motion said, "I've said all along this year, I think this horse is every bit as good as he was when he won the Breeders' Cup." Asked if Better Talk Now would return to Woodbine to contest the Canadian International, Motion added, "The International is a very prestigious race in its own right. We're going to have to get together and decide whether to choose that or the Breeders' Cup." 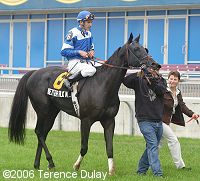 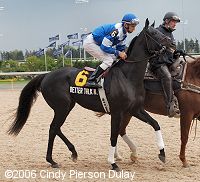 Better Talk Now returns after the race. (left) Winning jockey Ramon Dominguez said, "He has also run in some races where it seems like it's going to be paceless. As long as he relaxes, he can get it done. He can be his own worst enemy when he gets a little too keyed up. He's an old pro. He knows what needs to be done to win." 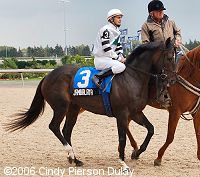 Second place finisher Jambalaya in the post parade. His jockey Jono Jones said, I think he ran the race of his life. I had a perfect trip. I was right on the rail. That was probably the best going." 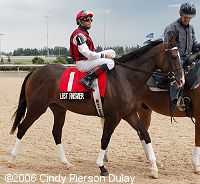 Second place finisher Last Answer in the post parade. Last Answer improved his career record to 4 wins, 10 seconds, and 4 thirds in 35 career starts, with earnings of $666,963, however he has not won a race since last August.

The distaff counterpart to the Sky Classic is the $100,000 Flaming Page Stakes at 1 1/2 miles over the turf, a race named after one of Canada's greatest fillies and the dam of Nijinsky II. Noble Stella was sent off as the 9-10 favorite off her win in the Glens Falls Handicap at Saratoga last out, and has also won the New York Breeders' Cup Handicap at Belmont and the Bewitch at Keeneland for trainer Roger Attfield, who was looking for career stakes win number 300 in this event. The 9-5 second choice was Better Talk Now's stablemate Olaya, seventh in the Glens Falls last out after three straight second place finishes in stakes company.

Like her stablemate Last Answer did in the Sky Classic, 7-1 shot Murani was loose on the lead for the first mile, through easy fractions of 25.76, 51.45, 1:15.58, and 1:40.83 as rain continued to fall over the already yielding turf course. 23-1 longest shot Foamy Water stalked the pace in second while jockey Mike Smith kept Noble Stella close up in third. At the top of the stretch, Murani had the lead after 1 1/4 miles in 2:07.06, but Noble Stella had closed the gap and in mid-stretch, the favorite had taken over the lead. However, the stubborn Murani had something left in the tank, and was able to shake off the challenge and drove clear to a 1 1/2 length victory in a time of 2:33.81. It was a long 5 lengths back from Noble Stella to Foamy Water in third, and 5 1/2 more to second choice Olaya in fourth.
Results Chart from DRF. 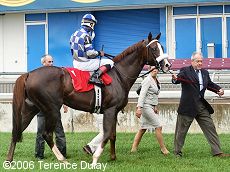 Owner Jurgen Schemmer leads Murani to the winner's circle. Winning trainer Mike Keogh said, "When Noble Stella drew up to her, I thought she was going to go by us. But this filly showed a lot of guts. If nobody was going to go (to the lead), we were going to do it. That's the way it set up. Emile (Ramsammy, jockey) had a lot of confidence in this filly going into the race. He thought the mile and a half would suit her." 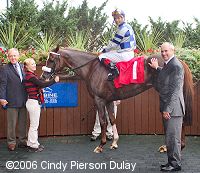 Murani in the winner's circle with rain-soaked trainer Michael Keogh at her flank. It was really pouring rain during the race. 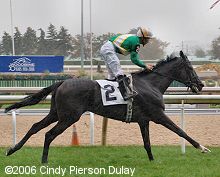 Second place finisher Noble Stella runs out after the race. 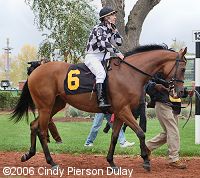 Third place finisher and longest shot on the board Foamy Water in the paddock before the race.