The final stakes race of the 2006 Saratoga meeting is the $112,100 Glens Falls Handicap (G3) for older fillies and mares. Nine went to the gate in this 1 3/8 mile trip over the inner turf course, with Olaya sent off as the 5-2 favorite off of three consecutive second place finishes, including the Very One and Orchid handicaps at Gulfstream, and the R.G. Dick Breeders' Cup at Delaware Park last out. In to challenge the favorite were 4-1 second choice Noble Stella, winner of the New York Breeders' Cup Handicap in June but fifth in the Dance Smartly at Woodbine in her last start, and 9-2 third choice Milwaukee, third in the Waya Stakes last out. An on-track crowd of 22,102 was on hand for closing day at The Spa.

8-1 shot Sabellina was allowed an uncontested lead of as many as 5 lengths through easy fractions of 24.77, 49.14, 1:14.49, and 1:38.97 while Noble Stella sat behind the lead 4 lengths clear of the rest of the field. Turning for home, Sabellina tired from her early efforts and dropped out of contention, as Noble Stella inherited the lead and opened up a 1 1/2 length lead with a furlong to go. Noble Stella drew away to win by 2 lengths over 7-1 Latice at the line, completing the trip in 2:16.02 over the "good" course. It was a long 3 3/4 lengths back to 5-1 fourth choice Louve Royale in third, who just nosed out 17-1 shot Wait it Out in fourth. Favored Olaya suffered traffic troubles early in the race, raced near the rear of the field the whole way, and could not close into the slow pace finishing seventh. 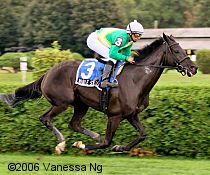 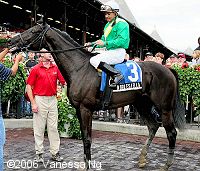 Noble Stella in the winner's circle. Rachel Halden, assistant to winning trainer Roger Attfield said, "I've been everywhere with her this summer, and I've had a lot of fun. Mike (Smith) gave her a great ride. This filly has been running well on the lead, but she doesn't need the lead. Mike knows her now and he puts her where she is comfortable. She really kicked on nicely." 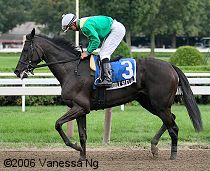 Noble Stella returns after the race. Winning jockey Mike Smith said, "It's the only way to go out this meet, because I have never been at Saratoga a whole meet without winning a stakes race. I got her to settle behind Sabellina, she settled so nicely. It was perfect. It was like she was on the lead. She's run some dynamite races on the lead, but she's also run some good races off the pace." 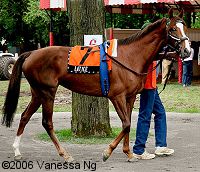 Second place finisher Latice in the paddock before the race. 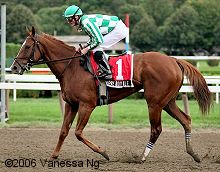 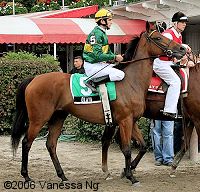