2006 Richter Scale, Honey Fox, and The Very One Results

Breeders' Cup Sprint champion Silver Train made his 2006 debut in the Grade 2 Richter Scale Breeders' Cup Sprint Championship, and he was sent off as the even-money favorite. Eight others entered to challenge him in this 7 furlong event for $200,000, including 3-1 second choice Sir Greeley and 9-2 third choice Mister Fotis.

When the gate opened, 14-1 shot Middle Earth and Sir Greeley went right to the front and dueled through a quarter in 22.37 and a half in 44.92, while Edgar Prado kept the favorite back in a stalking fifth. Turning for home, Mister Fotis, who had stalked the pace in fourth on the outside, made his bid and drew 2 lengths clear at the 1/8 pole. Sir Greeley responded to the whip of jockey John Velazquez but was left with too much to do, and was just a neck short. The winning time was 1:21.73. It was 2 1/4 lengths back to 24-1 shot Universal Form in third, while heavy favorite Silver Train had no response when asked, finishing a disappointing seventh. Results Chart from DRF. 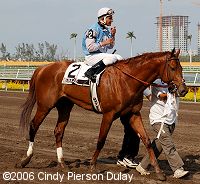 Mister Fotis circles before entering the winner's circle. Winning trainer Marty Wolfson said, "If you look at his last race and just isolate on him, he gets eliminated out of the gate, and then he's 10-wide at the 1/4 pole. I knew he'd be in front today. 7/8 is his distance. My only concern today was the post position (two). If he had been outside, he could have cleared easily, but Rafael had to get into him a little bit. I'm not sure what's next, maybe a race at Keeneland, or maybe the Artax (here).

Winning jockey Rafael Bejarano said, "He broke really good. I tried to hold him back, because there was so much speed in the race, but he was running good. At the top of the stretch I let him out a little bit, and when I saw that other horse (Sir Greeley) coming at me I let him out some more. He took care of everything from there." 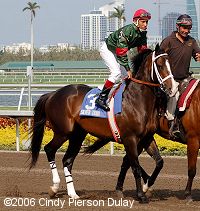 Beaten favorite Silver Train in the post parade. His trainer Richard Dutrow Jr. said, "I was concerned he wouldn't run on this track. It looks like that's what it was. I didn't see him ever look like he was ever going to run his kind of race at any point. We'll see how he comes out of it. We'll point for the Carter (Handicap)." 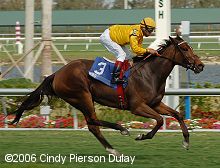 On the undercard, there were two Grade 3 events for older fillies and mares on the turf, each with a $100,000 purse. The Honey Fox Handicap saw seven distaffers travel 1 1/16 miles. 11-10 favorite Wend took the lead right away under John Velazquez, battled with 68-1 longshot Darluna most of the way, then when that one faltered at the top of the lane, was all out through the stretch to hold off the late charge of 9-1 shot Brunilda by a length in a time of 1:38.31. Winning trainer Bill Mott said, "She broke okay and Edgar put her in the race right away. There were clicking right along, but he wasn't asking her to do it, although she did have a horse on her hip. I wasn't surprised that she ran well. I think horses run good fresh. We'll look at the Jenny Wiley at Keeneland and the mile race at Churchill on Derby Day." Results Chart from DRF. 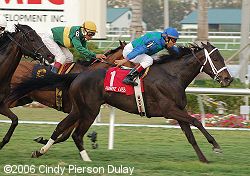 The marathon turf distaffers went in The Very One Handicap at 1 7/16 miles. Olaya was the 6-5 favorite off a 2-race winning streak including the Long Island Handicap at Aqueduct in November. 58-1 outsider Potra Clasica was loose on the lead for the first ten furlongs, through a half in 48.65, a mile in 1:37.54, and 1 1/4 miles in 2:01.37 over the firm going. On the far turn, 6-1 shot Dynamite Lass and the favorite Olaya made their charges to the front. Olaya had a brief lead inside the 1/8 pole but could not hold off the onrushing Dynamite Lass, who passed her to win by 3/4 length in a time of 2:18.81. It was just a nose from Olaya to 3-1 second choice Noble Stella in third. Winning trainer Kiaran McLaughlin said, "I thought we'd be more forwardly placed than that. Rafael (Bejarano) rode a perfect race. She's a very nice filly. She finished second so many times (four), and I'm glad she finally got a Graded stakes win." Results Chart from DRF.