A large field of eleven 3-year-olds went to post in the Grade 2 Swale Stakes, sprinting 7 furlongs for the $150,000 purse. Noonmark was sent off as the 7-5 favorite off his two race winning streak, but he was making his stakes debut up against 9-2 second choice Praying for Cash, and 7-1 third choice In Summation.

Praying for Cash was hustled to the front early by jockey Edgar Prado, and he set quick early fractions of 22.03 and 44.58 down the backstretch while being challenged just to his outside by 14-1 outsider Sharp Humor. At the top of the stretch, the early leader succumbed to the fast pace, as Mark Guidry sent Sharp Humor to the front. Through the lane, Sharp Humor held off the late charge of the favorite Noonmark to prevail by a neck, in a time of 1:22.14 over the fast track. It was 2 1/2 lengths back to 10-1 shot Court Folly in third, 2 1/4 more to In Summation in fourth, while Praying for Cash faded to sixth. Results Chart from DRF. 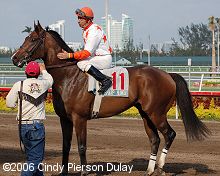 Sharp Humor returns after winning the race. Winning trainer Dale Romans said, "He's just a fast, fast horse. I know he's a New York-bred, but he's a well-bred New York-bred. He does everything right. He's got a real high cruising speed. I don't think we'll be heading back to New York just yet. We're going to look at some bigger races down the road, and see if this horse can go around two turns. It seems like we have to have a little bigger plan now. There's already been one Distorted New York-bred to win the Derby (Funny Cide). Let's see if we can get there."

Winning jockey Mark Guidry said, "We followed the game plan (to be on the pace). It went real well. We had some concern at the eighth pole, but my horse fought back real hard." 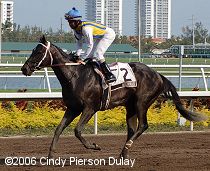 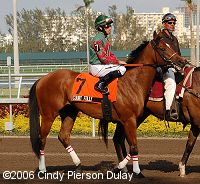