The stakes action at Gulfstream Park continued on Sunday afternoon with two events for 3-year-old fillies on the Kentucky Oaks trail. Each was a Grade 2 event with a $150,000 purse.

A field of seven went to post in the Bonnie Miss Stakes, a 1 1/8 mile trip around the main track. Davona Dale Stakes winner Wait a While was sent off as the 11-10 favorite over 3-1 second choice French Park, second in the Silverbulletday at Louisiana Downs last time out, and 5-1 third choice Teammate, who was second in the Davona Dale.

When the gate opened, jockey Cornelio Velasquez sent Teammate to the front to set the pace going around the clubhouse turn. With the favorite Wait a While stalked her the whole way around just a length off the pace, through easy fractions of 23.88, 48.04, and 1:12.18. With such a slow pace, Velasquez asked Teammate for run at the top of the stretch and got it, as she had plenty left to pull away from the field. 7-1 shot Wonder Lady Anne L made a late charge through the stretch after racing in fifth early but was left with too much to do, as Teammate finished 6 lengths clear at the line in a time of 1:48.25 for the 9 furlongs over the fast main track. Wonder Lady Anne L wore down the favorite inside the 1/16 pole to get up for second by a head. Second choice French Park sat well off the pace, was wide around the far turn and showed nothing in the stretch, finishing last. Results Chart from DRF. 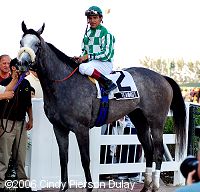 Teammate in the winner's circle. Winning jockey Cornelio Velasquez said, "It was pretty easy. She relaxed for me. At the quarter pole I had a lot of horse. I never hit her. She won easy today." 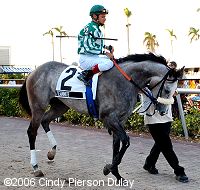 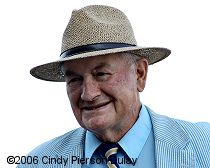 Teammate heads to the track for the post parade. Winning trainer Allen Jerkens (right) `said, "I didn't think she'd be on the lead, but I didn't tell Cornelio (Velasquez) what to do. I left it up to him. Last time it was muddy, and she was behind a lot of dirt. We put her on Lasix because we thought it would help her a little bit. She's such a very, very small horse, and she bled just a little amount, but we figured next time it could be much worse. It looks like she'll go a distance. Of course, these fillies don't have to go much farther in distance in the big races. I have no I idea what might be next. I would prefer the Acorn (Belmont Park), but it's just nice to win one, and you always hope they stay sound."

The Forward Gal Stakes saw ten 3-year-old fillies sprint 7 furlongs on the main track. Joint Effort was sent off as the 5-2 favorite off her win in the Sunshine Millions Oaks. Also in the field were Old Hat Stakes winner Misty Rosette and Gasparilla Stakes winner Sweet Fervor, going off at identical odds of 7-2 as the second choices on the board. 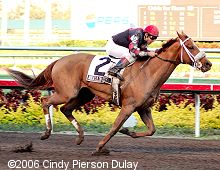 93-1 longshot Vestrey Lady had the lead after the first quarter mile in 22.18, with 68-1 shot Lake Alice keeping pace with her just to her outside. Misty Rosette, who chased them early, inherited the lead on the midpoint of the turn after 1/2 a mile in 44.57 as the two pacesetters dropped from contention. Misty Rosette held the lead with a furlong to go, with 4-1 shot India making her four-wide bid through the stretch. India briefly had the lead but 18-1 shot Miraculous Miss, who was outrun in last early, went widest of all around the turn and closed strongly, rallying right by India for the win by 1 3/4 lengths in a time of 1:22.78. It was just 1/2 a length back to Misty Rosette in third. Sweet Fervor gave way in the stretch and finished fifth, while favored Joint Effort sat well off the pace early but had no response when asked in the stretch. Results Chart from DRF. 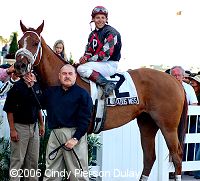 Miraculous Miss in the winner's circle. Winning trainer Steve Klesaris said, "There's no doubt it was the track last time (sloppy). We felt confident to go in this one knowing she'd be able to come from off the pace with 11 horses in front of her. In her last race we knew an eighth of a mile out of the gate, when the jock was scrubbing on her and she was going nowhere. It was on a big day of racing (and) it was a shame that it was the only rainy day we've had. We'll possibly look at the Comely Stakes (Aqueduct). As far as her best distance, we don't know that yet. She's picked up another furlong every race, except for the slop race, and she's answered the bell every time."

Winning jockey Jeremy Rose said, "I had a pretty good trip. They went pretty fast the first part of it, so at about the five-sixteenths pole, I just swung around all the horses in front of me. I thought I had enough horse to make it, because they went so quick, and she did fine." 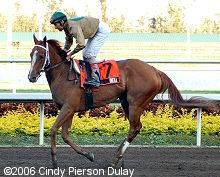