The Fountain of Youth Stakes is the major local prep for the Florida Derby. A field of 10 Triple Crown hopefuls went to post in this $300,000 Grade 2 event at 1 1/8 miles at Gulfstream Park. As expected, First Samurai was sent off as the overwhelming 7-10 favorite off his second placing in the Hutcheson and a third in the Breeders' Cup Juvenile. Also in the field were 9-2 second choice Great Point, second in the Holy Bull last out, and 8-1 third choice Corinthian, an allowance winner at the distance making his stakes debut.

First Samurai as expected was sharpest out of the gate and jockey Edgar Prado angled him toward the rail for a ground-saving trip through an initial quarter in 23.86. Down the backstretch, Prado relaxed the heavy favorite while loose on the lead, getting the half in 48.30 and 3/4 in 1:12.36, with 10-1 shot Flashy Bull chasing him the whole way. Rounding the far turn, Javier Castellano asked Corinthian for his run having stalked the pace wide throughout back in fifth. Corinthian pulled up alongside the favorite with 3/16 to go, but bore in forcing Prado to check First Samurai and then swing him to the outside. First Samurai got back into gear and rallied again, but at the 1/16 pole Corinthian bore out into First Samurai pushing him into Flashy Bull who was attempting his rally on the outside. At the line, Corinthian finished a length ahead of First Samurai, getting the 9 furlongs in 1:49.00, with Flashy Bull just a neck back in third. The stewards put up the inquiry light immediately after the race, and upon reviewing the head-on replay, disqualified Corinthian to third for interference, handing the victory to First Samurai and second money to Flashy Bull. Results Chart from DRF. 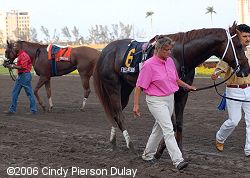 First Samurai and Corinthian circle as they await the decision on the objection. Winning jockey Edgar Prado said, "I think the stewards did a good job. His horse (Javier Castellano on Corinthian) was supposed to maintain a straight course." 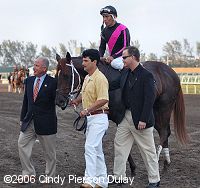 Owners Bruce Lunsford and Lansdon Robbins lead First Samurai to the winner's circle. Winning trainer Frank Brothers said, "I thought my horse ran a very good horse. He showed a lot of courage, He was impeded a little bit. He's never been two turns before. He was a one-turn horse. It was a very good race and we got him to relax. It's not a lot of fun (winning by DQ), but (the stewards) probably made the right call. I've been on both sides of the call. The door is open from here, either the Florida Derby or the Blue Grass. The main thing is to see how that horse is. This (race) doesn't get him to the first Saturday in May, but it gets him along." 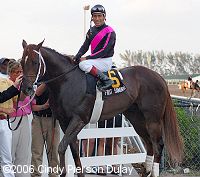 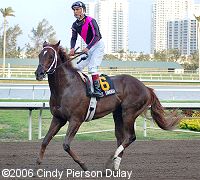 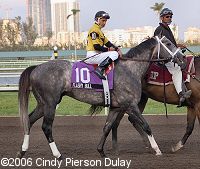 Third place finisher placed second Flashy Bull in the post parade. His trainer Kiaran McLaughlin said, "That 10 hole is tough but to run as well as he did is really something. We didn't win but we sure got close." Jockey Rafael Bejarano added, "I really wish I had gotten up for second, because I'd be going to the winner's circle right now. That horse was getting out too bad and had to come down." 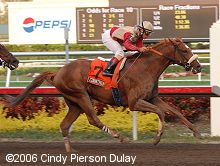 First place finisher Corinthian who was disqualified and placed third as he crossed the finish line in front. His trainer Jimmy Jerkens said, "I don't know why he did what he did. It was clear that he was he was the better horse. We can work on it (tendency to bear in). He's a lot better today than in his last race. He'll probably be even better when we get him back home to New York. We'll likely point him for the Wood (Memorial). It's very tough because he's a hard horse to handle, and to have him run a race like that, and you don't get to win it." His jockey Javier Castellano added, "He's a very hard horse to ride. He came out a little bit at the end, but as soon as he came out, I thought he was clear. In my mind, he's still a very immature horse, and he's always been difficult in the gate. He was tired at the end."