The $250,000 Hopeful Stakes (G1) is the final Grade 1 event for the year at Saratoga, and is the meet's premier event for 2-year-old males. Just five colts were entered, with only four betting interests and no show wagering, as the Todd Pletcher-trained duo of Scat Daddy and Circular Quay were sent off as the 4-5 favorites. Scat Daddy won the Sanford earlier in the meet, while Circular Quay won the Bashford Manor at Churchill Downs in July, both colts coming into the race undefeated in two career starts. In to challenge was 5-2 third choice Unbridled Express, a runaway maiden winner at Churchill last time out. 3-1 Pegasus Wind and 8-1 Irish Ace rounded out the field.

Pegasus Wind went right to the front under jockey Cornelio Velasquez and he was immediately joined by Irish Ace to contest a hot pace of 22.36 and 44.88 down the backstretch. Scat Daddy settled just in behind them in third while Circular Quay broke slowly and had spotted the field 12 lengths after a quarter mile. Rounding the far turn, Scat Daddy moved up to the front to battle with the stubborn pacesetter Unbridled Express, who continued to hold the lead at the 1/8 pole after 6 furlongs in 1:10.19. However, out of the clouds came Circular Quay, who came out wide at the 3/16 pole and closed like a freight train down the center of the track to run right by the field and won going away by 4 1/4 lengths over his entrymate, who shook off Unbridled Express inside the 70 yard pole to take second money. It was a long 3 1/2 lengths back from Unbridled Express to Pegasus Wind in fourth, and 9 more to the tired Irish Ace in last. 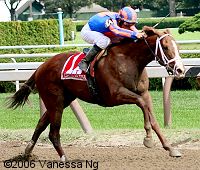 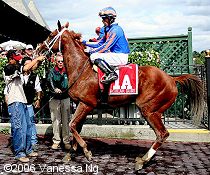 Circular Quay acts up as they try to pose him in the winner's circle. Winning trainer Todd Pletcher said, "I was trying to keep my eye on both horses. Circular Quay is a true homebred. He's by Thunder Gulch, who won the Travers (1995) and his dam, Circle of Life, won the Spinaway (1999). The race obviously set up well for him. I expected Circular Quay to be last down the backstretch, but I didn't expect him to be that far back. He was way out the back, but it worked out well for him. That's kind of been his natural running style. Sometimes when you're the lone closer, it's as good as being the lone speed." 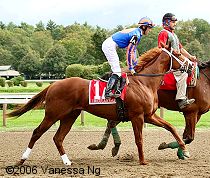 Circular Quay in the post parade. Winning jockey Garrett Gomez said, "I didn't want to be that far back, but they were all in a drive at the 5/8 pole, so I just sat on him. I just kept waiting on him, and finally at the 3/8 pole I said, 'I'm tired of waiting, it's time to go.' At the 1/4 pole, he got me up there and then he just took off." 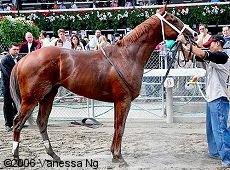 Circular Quay poses while being hosed off after the race. Asked where his two top juveniles will go next, he said, "I'm not sure what we'll do. I'm not crazy about the Champagne being three weeks before the Breeders' Cup. It's possible that one might run in there and it's possible that neither may run in there." 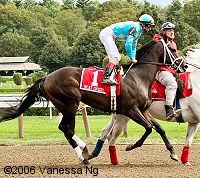 Second place finisher Scat Daddy in the post parade. His trainer Todd Pletcher said, "I thought both horses ran extremely well. Scat Daddy broke a half-step slow and rushed up and had to steady a bit and was part of that speed duel. I thought Scat Daddy, considering everything, was the one horse that finished up well out of the speed duel. I think this puts both horses right at the top of the class." Jockey John Velazquez said, "I can't explain what happened to him. I didn't think he was going to run after he stumbled. I was trying to work my way out of it. I don't know how he got back into the race after that. I'm glad he got back up again to run well as he did." 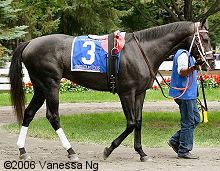 Third place finisher Unbridled Express in the paddock before the race. His jockey Edgar Prado said, "I was in a perfect spot turning for home, but he didn't kick in like I thought he would. I knew they were moving real fast in front of me, so I put him outside and bided my time. He was trying real hard."