Delaware Park's biggest weekend, highlighted by the $1 million Delaware Handicap on Sunday, kicked off on Saturday afternoon with the $500,000 Delaware Oaks (G2) for 3-year-old fillies at 1 1/16 miles on the main track. A field of eight went to post with Hollywood Oaks winner Hystericalady shipping in from California as the 9-10 favorite over 5-2 Adieu, fourth in the Acorn last time out for trainer Todd Pletcher.

When the field got underway, favorite Hystericalady went right to the front and set a pace of 23.56, 47.69, and 1:12.12 while being stalked by 73-1 longest shot Peak Maria's Way. Adieu and jockey John Velazquez sat back in fourth in stalking position, out of trouble just to their outside. Rounding the far turn, 15-1 Amandatude, who had raced back in sixth early, moved up along the inside and took over the lead with a furlong to go. However, Adieu was just hitting her best stride, passing the pacesetters on the outside, and then through the stretch, wore down Amandatude inside the 1/8 pole and drew clear to win by 2 1/4 lengths in a time of 1:43.72 over the fast surface. It was another 3 1/2 lengths back to 6-1 third choice Gasia in third, while Hystericalady faded through the stretch to finish a disappointing fifth. 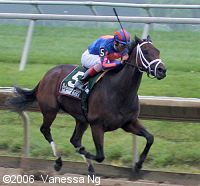 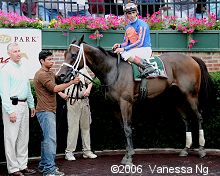 Adieu in the winner's circle with trainer Todd Pletcher on the far left. Pletcher said, "(John Velazquez, jockey) said they kind of fanned him out the around the far turn a little bit. Outside of that, it was a pretty good trip. She did not run a bad race in her first start back, she did finish second. She was fourth in Grade I last time, so that was not bad. But, I think the third race back is a lot of the times the best in a return cycle." 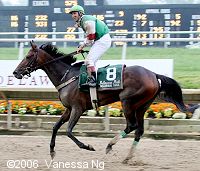 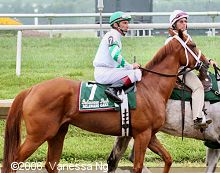 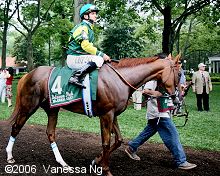 Beaten favorite and fifth place finisher Hystericalady in the paddock before the race. Her jockey Patrick Valenzuela said, "I do not think she really liked this racetrack. It was a little cuppy out there and it is a lot different track then in California. She was bouncing over it nicely and she was running hard, but she was kind of struggling to do it." 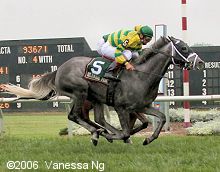 On the undercard was the $300,000 Robert G. Dick Memorial Breeders' Cup Handicap for older fillies and mares going 1 3/8 miles on the turf. 3-10 favorite and defending champ Honey Ryder settled well off the pace of 7-2 second choice Olaya through a slow half in 53.96 and 3/4 in 1:19.93, then closed determinedly through the lane to prevail by a head in a time of 2:20.81. It was 2 1/4 lengths back to 6-1 third choice Latice in third. The combination of trainer Todd Pletcher and jockey John Velazquez took two of the three stakes races on the card.
Results chart from Equibase 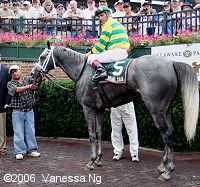 Honey Ryder with John Velazquez up in the winner's circle. 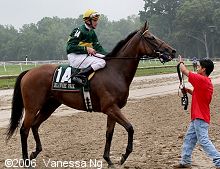 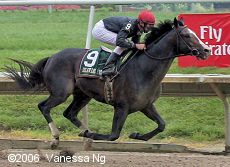 The other undercard event was the R.R.M. Carpenter Jr. Memorial Handicap for older horses at 1 1/16 miles on the main track. 4-5 favorite Survivalist stalked the pace inside, found running room on the turn and drew away through the stretch to win by 2 1/2 lengths over 7-2 second choice M B Sea in a time of 1:43.37 over the fast track.
Results chart from Equibase