The $2 million Obaiya Arabian Classic (G2) presented by Lexus featured a field of 13 older horses go 2000 meters (about 1 1/4 mile) around one turn of the main track. Tilal Al Khalediah was sent off as the 9-5 favorite, undefeated in 4 starts including the King Faisal Arabian Cup and the Imam Turki bin Abdulla Sword Stakes. In to challenge him included 3-1 second choice RB Rich Lyke Me, winner of the Bani Yas Stakes (G2) and Al Maktoum Challenge (G1) at Meydan, and 7-1 third choice Hadi de Carrere, 5th in the Wathba Stallions Cup in France last out.

Jockey Adrie de Vries sent RB Rich Lyke Me to the lead exiting the chute through fractions of 27.98, 53.76, 1:21.22, and 1:48.86 while pressed by 40-1 Nader Alkhalediah and stalked by 33-1 Prince Amer. Turning for home RB Rich Lyke me continued to lead until favorite Tilal Al Khalediah and jockey Adel Alfouradi took over at the 1/8 pole. Hadi de Carrere, midpack early under Olivier Peslier, closed down the center of the track to get up by a nose in 2:16.20. It was another 2 1/4 lengths back to the tiring pacesetter RB Rich Lyke Me third. 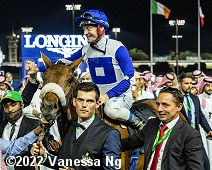 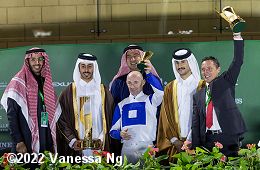 Left: Hadi de Carrere heads to the winner's enclosure. Winning trainer Thomas Fourcy said, "We had a few problems with him last winter in Qatar, and we left him in peace before giving him a nice and easy run in a race at Pau so that he would come here fresh and keen. He was very good at three in heavy ground and I wasn't worried about the track. He is a good mover and he goes for it. He showed a lot of courage and was very tough. And it was another magical ride by Olivier, who is just cool and patient and knows when to push the button. We will go to Dubai for the Kahayla Classic."

Right: The trophy presentation for the Obaiya Arabian Classic. Winning jockey Olivier Peslier said, "I know he's a strong horse, but he just gallops, so I was thinking about the win and kept fighting and fighting. When we passed the winning post, I didn't [know if I had won], but then I turned and looked for the screen and it was my face! So that's good for me! When you win like that, the pressure comes down.  It's great to win [in Saudi Arabia]. The year is very hard, so I will go relax in Mauritius soon, but I wanted a win [before]. My last five rides, I kept finishing second, second, second, but I thought, ‘Wait a second, the win is coming soon' and to win this one, I'm very happy." 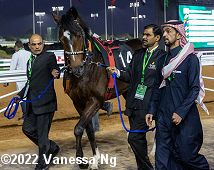 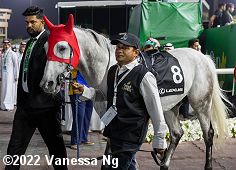 Left: Second place finisher and beaten favorite Tilal Al Khalediah in the walking ring before the race. The Saad Mutlaq trainee improved his record to 4 wins and 1 second in 5 starts, earning $674,000 for owner-breeder Alkhalediah Stables.

Right: Third place finisher RB Rich Lyke Me in the walking ring. Jockey Adrie de Vries said, "I was very happy with him. We knew before that we weren't going to get it easy in front and there was a lot of pressure on. He's got the natural speed and you don't want to disappoint him by taking him back. He ran a very very good race, it's a long old straight and it's deeper than Meydan, so a totally different story but we are over the moon with him." 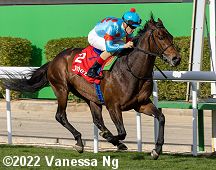 Kicking off Saudi Cup night was the $1.5 million Neom Turf Cup (G3) presented by Jahez, a 2100 meter (about 1 5/16 mile) trip around 2 turns of the turf course for older horses. Copa Republica Argentina (G2) winner Authority was sent off as the 2-1 favorite off his second place finish in the Japan Cup (G1). In to challenge him included two horses at 3-1, Pegasus World Cup Turf (G1) 9th place finisher Channel Cat and Pyledriver, runner-up in the Hong Kong Vase (G1).

Jockey Christophe Lemaire sent Authority to the lead first time by and he set the pace while pressed by Solid Stone and stalked by 90-1 Flying Visit and 40-1 Passion and Glory. Turning for home Authority had a 2 length lead and cruised the rest of the way to win by 1 1/4 lengths over late-running 88-1 Kaspar in 2:06.72. It was another 1/2 length back to 6-1 fourth choice Ebaiyra third. Unfortunately Channel Cat clipped heels and fell at the 3/16 pole, unseating jockey Joel Rosario; both horse and rider escaped injury and Rosario was able to ride the rest of the card. 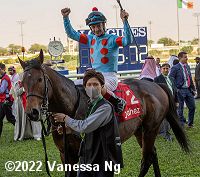 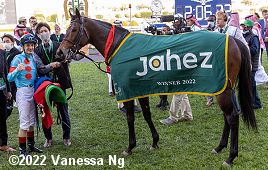 Left: Authority heads to the winner's enclosure. Winning jockey Christophe Lemaire said, "I had the best horse in the race. I set the pace the way I wanted, without any pressure. Then he used his long acceleration and did the same he used to do in Japan. He was very comfortable and at the end his strength made the difference. I knew he could stay the trip very well. The ground is firm, which we wanted. The plan was to go to the front and it worked out. I knew he would be very relaxed. At about 2000m I let him go; he did very well. The Japan Cup is one of the best races in the world; my horse was beaten by a Triple Crown horse in Contrail. The level in Japan is very high so it gave me a lot of confidence running second that day." 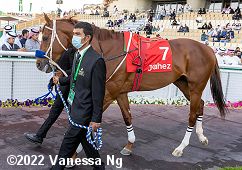 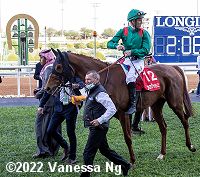 Left: Second place finsher Kaspar in the walking ring. Jockey Ricardo Ferreira said, "This is a short distance for this horse. He needs a longer distance but I stayed behind and took my time and he finished very strongly. This is only his second run in Saudi Arabia."

Right: Third place finisher Ebaiyra returns after the race. Jockey Christophe Soumillon said, "When I came into the straight I saw Christophe [Lemaire] was in front and that he was going to win the race, he was four lengths clear. We went a decent pace; his horse is a good horse. I came to finish second in the straight but in the last 50m the other horse just took second place. She fought hard and it was a great run from her." 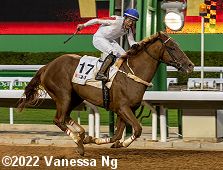 The $1 million Jockey Club Local Handicap presented by the Ministry of Culture is restricted to Saudi-trained older horses going the Saudi Cup distance of 1800 meters (1 1/8 miles) on the dirt. Almobeer was sent off as the 6-5 favorite off wins in the King Khaled Cup and Custodian of Two Holy Mosques Cup. In to challenge him included 6-1 second choice Bamer Allah, ninth in the Custodian of Two Holy Mosques Cup, and 8-1 third choice Motakay'yef, last year's runner-up but 11th in the Prince Bander JCSA Chairman's Stakes last out. 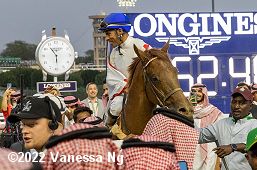 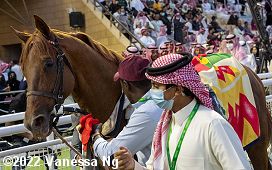 Left: Aan Alawaan in the winner's enclosure with his numerous connections. The Badan Alsubaie trainee improved his record to 3 wins, 3 seconds, and 3 thirds in 16 starts, earning $829,033 for owner-breeder King Abdullah Bin Abdulaziz Sons.

Right: Aan Alawaan heads back to the barn in his new winner's blanket.