There are two sprints held on Saudi Cup night, one on the dirt and one on the turf. The $1.5 million Saudi Arabian Airlines Riyadh Dirt Sprint is the feature sprint event on the card, contested at 1200 meters (about 6 furlongs) around one turn of the main track. Last year's runner-up Matera Sky was sent off as the 3-1 favorite in the field of 13 off his 2nd place finish in the JBC Sprint at Tokyo City. In to challenge him included 7-2 seocnd choice and defending champion New York Central off his 5th place effort in the Ministry of Foreign Affairs Cup (G3), and 4-1 third choice Switzerland, winner of the Dubawi Stakes (G3).

Jockey Keita Yosaki sent Matera Sky to the lead down the backstretch to set the pace while pressed by Switzerland and stalked by 85-1 Raeed and 66-1 Roman River. Turning for home Matera continued to lead but 14-1 Copano Kicking, unhurried early, came out for room and rallied by to win by 1/4 length in 1:10.66. It was another 3 1/2 lengths back to 51-1 Faz Zae third. 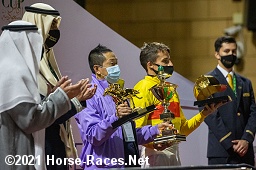 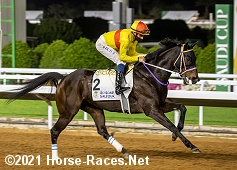 Left: The trophy presentation for the Dirt Sprint. Winning trainer Akira Murayama said, "He is a very talented horse but he's not easy to train, he's temperamental, very edgy and overexcited and he didn't do too much work this week before the race. I called the owner before the winner's ceremony, he was very happy, he spoke to William and asked him to ride his horses again in Japan when he comes back. He will go to Dubai, hopefully for the Golden Shaheen. I thought it was going to be a tough race and I'm pleased that we beat last year's winner." 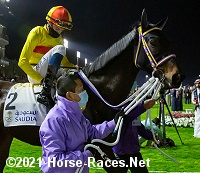 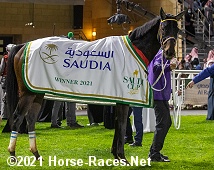 Left: Copano Kicking in the walking ring. Winning jockey William Buick said, "He was slowly away but I was soon on the tails of the leaders coming into the bend and he picked up really well." 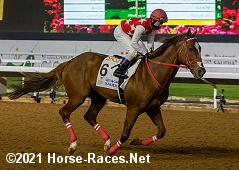 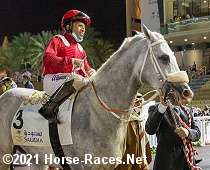 Left: Second place finisher and beaten favorite Matera Sky in the post parade. Jockey Keita Tosaki said, "I think Matera Sky ran his race. I thought he won and made revenge as last year's runner up. But he toughed it out."

Right: Third place finisher Faz Zae returns after the race. Jockey Wigberto Ramos said, "I'm very happy. That's the way he runs. He starts with the horses then he hangs back, then at the 400m he comes again. Today he was closer than before so I gave him a little break at the 600m and then I kicked. It's been a great meeting for me – I had a winner yesterday and today and I was very happy with this horse."

The $1 million stc 1351 Turf Sprint is contested at 1351 meters (about 6 3/4 furlongs) around one turn of the turf course. A field of 11 went to post with Space Blues sent off as the 1-2 favorite off 4 straight wins including the Prix Maurice de Gheest (G1) last August in Deauville. In to challenge him included 6-1 second choice and defending champion Dark Power off a 3rd place finish in the Rashid Equestrian Club Cup in Bahrain, and 13-2 third choice Glorious Journey, 3rd in the Al Fahidi Fort (G2) in Dubai.

Jockey Alexis Moreno sent Krispen to the lead down the backstretch while pressed by Urban Icon and stalked by Dark Power and Glorious Journey. Turning into the lane, Urban Icon ganed a short lead but Space Blues, midpack early under William Buick, swept to the front pulling away to win by 3/4 length over Dark Power in 1:20.03. It was another 3/4 length back to Urban Icon third. 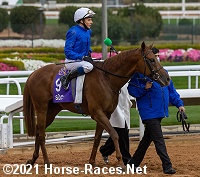 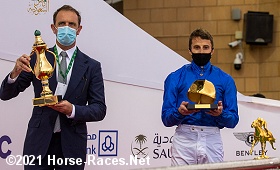 Left: Space Blues heads to the winner's enclosure. Winning trainer Charlie Appleby said, "Absolutely delighted with that. We knew he was a class horse coming into the race and he had a lovely draw. I could see (the ground) was a bit loose for him and our concern was that he might just spin a bit on it, but he's come back on the bridle turning in like a class horse and put the race to bed at the right time. He travels for fun, watching the race there. I'll be interested to see what William has to say because obviously Dubai World Cup night has to be taken into consideration."

Right: The trophy presentation for the stc 1351 Turf Sprint. 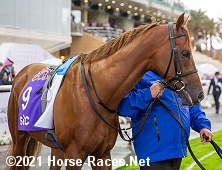 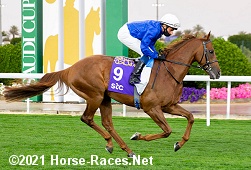 Left: Space Blues in the walking ring. Winning jockey William Buick said, "We had a great run through. He broke well and I didn't want to be too close to the pace. The pace was perfect. It wasn't too hot or too slow. I followed Frankie (Dettori) before the split in the straight. It was how I hoped the race would pan out. He was the best horse and I didn't want to go for any heroics. You'd imagine this would set him for the Al Quoz."

Right: Space Blues warms up before the race. 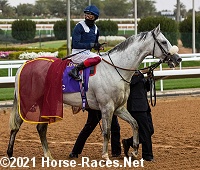 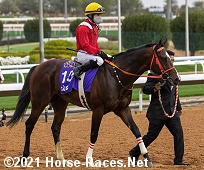 Left: Second place finisher Dark Power returns after the race. Jockey Frankie Dettori said, "I had a good race. I got the cover and we ran pretty much the same race as last year. He ran well and I was delighted to have him back in great form. The winner is a Group 1 horse, let's not forget. There is just some water on the track, it still rides beautifully."

Right: Third place finisher Urban Icon returns after the race. Jockey Joel Rosario said, "That was good – he broke well; it took him a little bit to get a position, but turning for home, for a second I thought he was going to go on, but there were strong horses coming at the end there, the first two. He ran good, though."