The world's richest horse race celebrates its second running at King Abdulaziz Racetrack on Saturday evening. The $20 million Saudi Cup is the final race of an 8-race card, scheduled to go to post at 8:40PM local time (12:40PM ET). A full field of 14 older horses will contest this 1800 meter (about 1 1/8 mile) trip around one turn of the 1 1/4 mile dirt main track in Riyadh.

Charlatan is the 7-4 favorite (from OddsChecker.com at time of writing), off his win in the Malibu Stakes (G1) at Santa Anita off a long layoff. Regular rider Mike Smith will be in the irons from post 9 for trainer Bob Baffert. In to challenge him include 3-1 second choice Knicks Go, winner of the Breeders' Cup Dirt Mile (G1) and then the Pegasus World Cup (G1). Joel Rosario gets the call for trainer Brad Cox from post 5. Mishriff is the 7-1 third choice, with the rest of the field at double digit odds. He won the Prix du Jockey Club (G1) and Prix Guillaume d'Ornano - Haras du Logis Saint-Germain (G2) before disappointing 8th in the QIPCO Champion Stakes (G1). Frankie Dettori rides for trainer John Gosden from post 12.

The post positions were drawn in the usual double-blind manner. The names were drawn randomly by computer, and then a plastic egg was drawn from a bowl by special guest Jorge Ricardo, who leads all jockeys with over 13,000 victories, having surpassed the previous record-holder Russell Baze. Inside the egg is the post position.

After drawing the 5 for Knicks Go, Dustin Dugas, assistant to Brad Cox said, "We like it, it's right in the middle, he's a speed horse, it's a long way till they get to the turn, Joel (Rosario, jockey) will have a lot of ground to work at before he gets to the turn." Thady Gosden, assistant to father John was pleased with post 12 for Mishriff. "We were hoping for a fairly wide draw. The American horses have far more gate speed than ours, so we're very happy with that." Longshot Extra Elusive drew the far outside post 14 and gets regular rider Hollie Doyle. Trainer Roger Charlton said, "I'm happy with the draw for Extra Elusive in stall 14. He hasn't run on the dirt before, and he's probably a horse who doesn't like to be crowded that much, so I think that gives him and Hollie (Doyle, jockey) a good shot down the outside. I'd certainly prefer stall 14 to stalls one or two or three, so so far we're happy and we're going to give it our best shot on Saturday."

The undercard kicks off with the 3 turf races, starting with the Neom Turf Cup for older horses going 2100 meters (about 1 5/16 miles). Bill Mott trainee Channel Maker and jockey Joel Rosario represents America and takes on Tilsit and True Self. The stc 1351 Turf Sprint is contested at 1351 meters (about 6 3/4 furlongs). Godolphin entrants Space Blues and Land of Legends are heavily favored. Closing out the turf action is the longest race on the card, the Red Sea Turf Handicap at 3000 meters (about 1 7/8 miles). Freddy Head trainee Call the Wind is the favorite over Prince of Arran and Secret Advisor. The Arabians take center stage in the Obaiya Arabian Classic over 2000 meters (about 1 1/4 miles), followed by the Jockey Club Handicap featuring local horses going the Saudi Cup trip of 1800 meters (about 1 1/8 miles). The Saudi Derby is the only age-restricted race, for 3-year-olds going 1600 meters (about 1 mile). Godolphin sends out favorites Soft Whisper and Rebel's Romance to take on American entrant Cowan from the Steve Asmussen barn. The penultimate race is the Saudi Arabian Airlines Riyadh Dirt Sprint over 1200 meters (about 6 furlongs). Japan's Matera Sky and Oxted from England are favored.

Note that unlike in North America and Dubai, the saddlecloth numbers do NOT correspond with post positions; the horses are numbered in handicap weight order, as is common in Europe and Australia. The Saudi Cup goes off at 12:40PM (all times Eastern), while the first race is the $1 million Neom Turf Cup at 8:00AM. The table to the right has all the post times.

The races will be shown live on TVG in the U.S. and HPI-TV in Canada, as well as at racetracks and simulcast sites. In addition, Fox Sports 1 will show the Saudi Cup starting at noon ET.

Below are the entries and post positions for the Saudi Cup. All entrants carry 57 kg (126 lb). 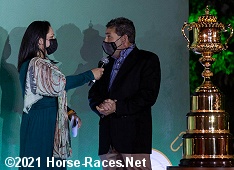 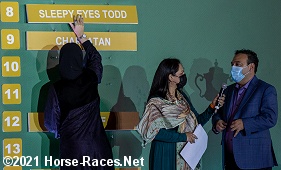 Left: Favorite Charlatan drew the 9 post for trainer Bob Baffert. Assistant Jimmy Barnes said, "I spoke to Bob (Baffert, trainer) earlier and he said anything, six, seven, eight or nine would be perfect. The one turn mile and an eighth would just be perfect."

Right: Longshot Sleepy Eyes Todd drew post 8. Trainer Miguel Angel Silva said of the 25-1 outsider, "I wanted to be more outside, but it's great. It's not perfect but it's great. We are next to Charlatan, so that is good. We are very excited. We didn't want to be inside so this is good, we are more to the outside." 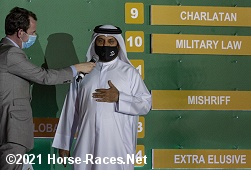 Left: Bill Mott trainee Tacitus drew post 7. Assistant trainer Neil Poznansky said of the 14-1 shot, "He has Johnny V (Velazquez) on him and the whole backside to work a trip on him."

Right: Local hero Military Law drew post 10. Trainer Masabbeh Al Mheiri said of his 12-1 shot, "Not too bad. In three, four or five would be good, but 10 is not bad. He can't go too fast anyway (early). When you have luck, God gives it to you." 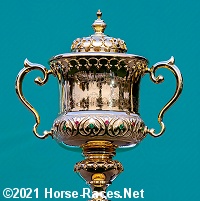 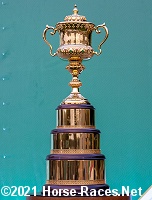 The Saudi Cup trophy. Local trainer Abdullah Mushrif has 2 horses entered, 9-1 shot Derevo in post 13 and 50-1 longest shot Great Scot in post 3. He said, "Very happy. More happy with Great Scot from 13. It will be hard for Derevo but inshallah (God willing) we will win, it's my dream."