On the evening before the second running of the $20 million Saudi Cup, was the second edition of the $1.6 million stc International Jockeys Challenge. 14 riders from around the world (7 males and 7 females) were invited to compete, and were randomly assigned mounts in 4 races on the card, all run under handicap weights around 1 turn of the dirt track (distances from 6 furlongs to 1 1/8 miles) with $400,000 purses, the first 3 for older horses but the 4th and final leg restricted to 3-year-olds. Points were awarded based on the jockey's placing in each race, using a 15-10-7-5-3 system, with the leader after the 4 races declared the winner of the trophy and $30,000. Conditions were ideal during the races, with cloudy skies, temperatures in the 60's, and the main track fast.

Irish star Shane Foley emerged triumphant in the second stc International Jockeys Challenge after taking two out of the four legs, each worth US $400,000, in the competition. Fourteen internationally-renowned male and female jockeys from all over the globe took part but it was the Classic-winning Foley, who rides for trainer Jessica Harrington in Ireland, who took Friday night's honours, however, with a total of 30 points for his two wins. He said: "It's massive to win this. It's a nice break and during a quiet time for us during the winter, so it's nice to get away and get the opportunity. We have a runner tomorrow (Barbados in the Red Sea Turf Handicap), but these challenges are important for young jockeys to get noticed around the world and hopefully it might open a few doors somewhere else."

"We have all-weather racing back home, but it's nothing like the dirt (track) is here. I've ridden in Japan for a couple of winters and ridden in America and it's nice, it's different (to ride on dirt). It was such a privilege even to be invited here but to be competing and winning - it's the sort of thing you strive for," said the delighted Irishman. "It's a fantastic racetrack and it's brilliant to be here."

Local jockey Adel Alfouraidi said: "It means a lot to me. I am one of the Saudi riders and they are all going to be happy for this win, all the Saudi jockeys. She' s a good filly and she gave me a lot of help throughout the race. We were all together but I am thanking God that I was able to win it. For me, this is a dream come true." He finished second in the jockeys challenge with 25 points - as well as his win, he picked up second place and therefore 15 points in the second leg.

The US Hall of Fame jockey Smith, known as 'Big Money Mike' took an early lead in the challenge when he snatched the first leg, sponsored by stc dare, on Mortajeh, having replaced John Velazquez. Mike Smith finished third with 19 points. Smith said: "Lessons learned (after being fined and suspended for excessive whip use last year). You learn from big things like that and I learnt a big lesson and I humbled myself a whole lot and then I am ready for tomorrow. I'm very happy to be back and I'm happy to be back with a horse that has an abundance of talent."

Japan's Nanako Fujita and Sweden's Malin Holmberg tied for fourth with 12 points, and Jessica Marcalis took sixth for Italy with a tally of 11 points. Due to issues related to COVID restrictions, John Velazquez was not permitted to travel to Riyadh and was replaced by Mike Smith in the competition.

Fourth place finisher Fujita said, "It was a lot of fun. I'm disappointed I didn't win but I hope to be back so I can get revenge." Sixth place finisher Jessica Marcialis added, "It was amazing. The first race was different, it's a style that suits the American jockeys not the Europeans, but in the second race I thought 'I understand'. I didn't know where I was in the competition but I finished with a smile."


Immediately before the first race of the jockey competition, a field of 14 older horses went 2100 meters (1 5/16 miles) around two turns of the turf course in the inaugural running of the $500,000 Saudi International Handicap, restricted to horses from jurisdictions outside Parts I and II of the International Federation of Horseracing Authorities. As a result, the field consisted of horses from Saudi Arabia, Spain, the Czech Republic, and Bahrain. Noray and Desert Lion dueled on the front end first time by while stalked by Nicklaus and Walkinthesand. Turning for home, Rayounpour gained a short lead but the fast pace set the race up for the closers. Local hope Petrus, midpack early under Wigberto Ramos, came out widest of all and kicked clear to win by 2 1/4 lengths over Desert Lion in 2:10.08. It was another 1/2 length back to Rayounpour third. 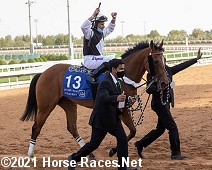 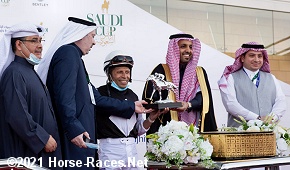 Left: Petrus heads to the winner's circle. Winning jockey "Wiggy" Ramos said, "I'm very happy to get this win. I tried to be close on my horse but he didn't want to be close so I stayed back and waited for him to give me the sign. At the 800 (metres) I started to look for a bit of a run but I didn't have the room, then when he was out in the clear he was very strong. This kind of race is fantastic and brings more quality horses to race in Saudi Arabia."

Right: The trophy presentation for the International Handicap. 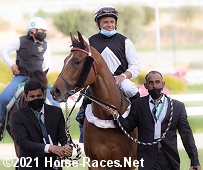 Left: Petrus returns after the race. Ramos added, "Winning always feels good but on a day like today it is even better. Last year I broke my wrist and I couldn 't ride on this day so this year I have made it and so far, so good."

Right: The horses break from the gate for the International Handicap. 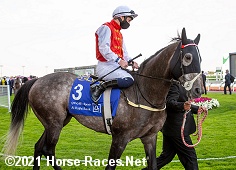 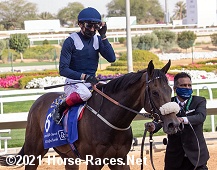 Left: Second place finisher Desert Lion in the walking ring before the race. Jockey Paddy Mathers said, "I had a really good trip actually. I just got stuck in a bit of a pocket before turning in so I had to get out of that. Then he picked up. He ran a cracking race. I can't ask for anything more for him. He's a lovely horse and his future seems very big now."

Right: Third place finisher Rayounpour returns after the race. Jockey Frankie Dettori said, "He stays and (2100m) is a little short for him. I had him in the box seat and kicked on early. I knew he gallops all day. The first two just had too much turn of foot for me."