On the evening before the third running of the $20 million Saudi Cup, was the third edition of the $1.6 million stc International Jockeys Challenge. 14 riders from around the world (7 males and 7 females) were invited to compete, and were randomly assigned mounts in 4 races on the card, all run under handicap weights around 1 turn of the dirt track (distances from 6 furlongs to 1 1/8 miles) with $400,000 purses, the first 3 for older horses but the 4th and final leg restricted to 3-year-olds. Points were awarded based on the jockey's placing in each race, using a 15-10-7-5-3 system, with the leader after the 4 races declared the winner of the trophy and $100,000. Conditions were ideal during the races, with clear skies, temperatures in the low 80's, the main track fast and the turf course good-to-firm.

Australian rider Caitlin Jones, regularly based in Morphettville, South Australia but currently riding in Dubai, was riding in Saudi Arabia for the first time. She rode Koheylan Alkheil to victory in the third leg of the series as well as the longest at 1800 meters, She was runner-up in the first race, a 1600 meter (1 mile) event, to finish with 25 points, three clear of Joel Rosario. As well as the prize-money she accumulated per race - each leg was worth US $400,000 - Jones takes home $100,000 as series champion. "To win a series like this, doing it on the world stage, there is nothing more rewarding. My filly in the last race ran well enough to get points but we got a winner earlier in the night and had a second straight off the bat, so it has been a really awesome experience for me."

In the fourth leg, American representative Joel Rosario rode Mostawly to a 1 1/4 length win over Well Done with jockey Alexis Moreno (from Panama but locally based) second and Marhbabah with Ulrika Holmquist of Sweden third, putting him in second place in the competition. Rosario said, "It means a lot to finish second in this Jockeys Challenge. It already meant a lot to be part of it and I want to thank everyone for having me.  It is special for me to be here in Saudi Arabia. I'm very blessed. It was very nice to win a race in the Challenge, so that was very good. It's unique to be here, to ride against the best in the world." Rosario rides Midnight Bourbon for trainer Steve Asmussen in the Saudi Cup.

Australian legend Glen Boss retired from riding in November but came back to compete tonight to close out his career. He is best known as the regular rider of three-time Melbourne Cup winner Makybe Diva. In the second leg he rode Raeed to a 1 1/2 length win over Newbolt with Marie Velon of France, with Pagan and local rider Abdullah Alfairouz third. Boss said, "That was good fun, to be honest. The speed (in the second race) was very hot, and I had looked at the replays and knew my horse would be strong late. I am really happy. It's a brilliant track; very, very good. I did what I wanted to do and I would have loved to have won, for sure, but I felt like I rode well and gave my mounts their chance. It's an incredible experience. I've come here and had a wonderful experience and caught up with some of my old friends in the jocks' room that I haven't seen for years. To see Caitlin win it, a young girl who rides well in Australia, what a thrill to see the look on her face - that is priceless. I don't feel sad that (his riding career) is over. I was happy to come and do this and if I'd won it would have been fantastic but it wasn't about winning really. I got a few tingles today, so that was good."

Jones added, "It is sensational for Australia that myself and ‘Bossy' have won races here tonight. I had some really nice horses to help and I have to thank those connections, and the racecourse has been presented perfectly.  My opportunity came from being over in Dubai and I was actually invited as a reserve - there was another girl in front of me but she couldn't make it. I found out last Friday I'd got an email to say that I was coming. I have a lot of people to thank, especially trainer Will Clarken who brought me to Dubai to ride his horses, and without that I would not be here tonight. To be rewarded with this is overwhelming."


Immediately after the second race of the jockey competition, a field of 14 older horses went 2100 meters (1 5/16 miles) around two turns of the turf course in the $500,000 Saudi International Handicap presented by Al Rajhi Bank, restricted to horses from jurisdictions outside Parts I and II of the International Federation of Horseracing Authorities. Qaader and Domi Go dueled on the front end while stalked by Finely Tuned and Ana Almaqsood. Turning for home, Qaader and jockey David Egan led but bore out as Lauderdale under jockey Ronan Thomas came through between horses to win by 3/4 length over fast-closing King Shalaa in 2:09.85. It was another 3/4 length back to My Frankel third. 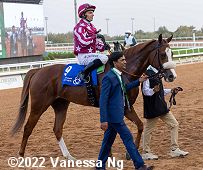 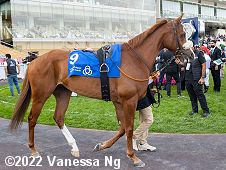 Left: Lauderdale heads to the winner's circle. Winning trainer Albon de Mieulle, who trains the first two finishers, said, "I was not expecting to win with [Lauderdale], I was expecting to win with [King Shalaa]. They both did a good job. It's a handicap race. In handicaps all horses should finish on the same line. You might have some traffic problems but the race is the race.  Today both jockeys did well, and we ran first and second. I am so happy for both owners.  It's my first time here in Saudi Arabia. The track is very nice; it's an amazing track. Well done to Saudi Arabia to have a track like that. The sand track looks fantastic and the grass is very, very nice. I am very very pleased to see that - well done to them. I've been in Qatar for more than 25 years. I'm working for His Highness Mohammed Bin Hamad Khalifa Al Attiyah, and I will say thank you to him for this. We'll decide with the owner on a plan - there's a race in Qatar in one month, I think we will look there and maybe next season if the rating isn't too high, we'll come back."

Right: Lauderdale in the walking ring before the race. Winning jockey Ronan Thomas said, "Amazing race! I took my time on him, let him relax - I was following Saiydabad at the top of the straight as I knew he would be one of the big chances. Then he accelerated very well for me. I wasn't sure if he would stay the full distance - I thought it might be a bit far - but he tried very hard and just held on. He is a pretty smart horse; he was Listed standard in France and he has been finding his form in Qatar before coming here." 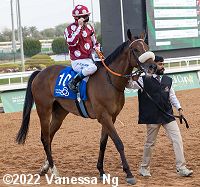 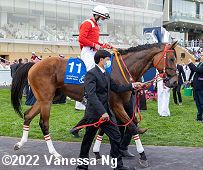 Left: Second place finisher King Shalaa returns after the race. Jockey Olivier Peslier said, "Nice horse, I was stuck down the outside but he showed a good turn of foot." Trainer Albon de Mieulle said, "The problem was that King Shalaa was [drawn] 14 outside in the gate; it is difficult. I told Olivier, ‘You have to wait, you have to be covered with your horse. Try to come in a straight line, you will see where you can find the way,' and he did, very well. If he has a good draw King Shalaa would beat Lauderdale."

Right: Third place finisher My Frankel in the walking ring before the race. Jockey Joel Rosario said, "I thought we were going to be in the lead, but he broke a little bit slow, so I had to go to another plan. He did well for a little while there; I had to shake him a little bit in the first turn. He did well - he was fighting there at the end."


Closing out the 8 race card Friday night was the $1 million Al Mneefah Cup presented by The Ministry of Culture for purebred Arabians also at 2100 meters (1 5/16 miles) on the turf. Tallab Alkhalediah and Soko battled for the lead while stalked by Good des Vialettes, Fettah du Loup, and First Classs. Turning for home Soko gained the lead but First Classs collared him at the 1/16 pole and pulled away to win by 2 lengths in 2:19.41. It was another 2 1/4 lengths back to Dergham Athbah third. 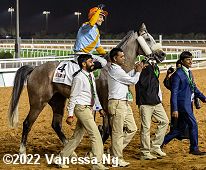 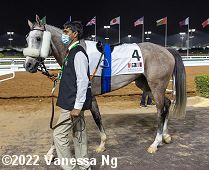 Left: First Classs heads to the winner's circle. Winning jockey Ronan Thomas said, "I was really confident before the race because I know my horse properly; he made a perfect race when he won the Derby in Qatar. It's a very high level of Arabian racing, we beat Abbes who finished second to Lady Princess in the big race there.  So it was a tough race today, but I was really confident after the start I had the perfect place and you can see I went to the front without using my whip. He's a really nice horse."

Right: First Classs in the walking ring before the race. Winning trainer Alban de Mieulle said, "He travelled very well. Soko was in front with the Al Khalediah horse on the inside. We thought it would be run at a faster pace but no, not too fast, but he was travelling so easily behind and he was waiting, waiting and then came on the outside. I'm very pleased." 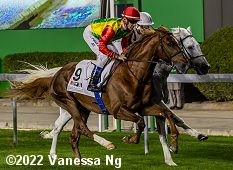 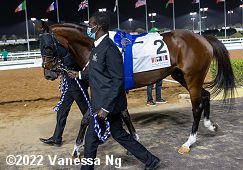 Left: Second place finisher Soko leads first time by. Jockey Olivier Peslier said, "He's a lovely horse and he travelled very well and fought very well. He was just lovely and always running well with good acceleration. He got beat near the finish and ran a great race. When the winner passed me, he went by really quick, so we were a good second. I'm very happy with him."

Right: Third place finisher Dergham Athbah in the walking ring before the race. Jockey Fernando Jara said, "We are really happy with him. Mohammed [Dagash, trainer] was really high on him. I got a clean trip. Coming to the stretch he responded very well. He's OK on the dirt too but he's better on the turf, I think. He showed a better turn of foot on it than in his last race. He's really enjoying himself here, the way he was training and everything here. I think he is happy."