The world's richest horse race celebrates its third running at King Abdulaziz Racetrack on Saturday evening. The $20 million Saudi Cup (G1) is the final race of an 8-race card, scheduled to go to post at 8:35PM local time (12:35PM ET). A full field of 14 older horses will contest this 1800 meter (about 1 1/8 mile) trip around one turn of the 1 1/4 mile dirt main track in Riyadh. This year, the main event will be run as a Group 1 event for the first time, while several of the undercard stakes are Group 3.

Defending champion Mishriff is the 5-2 favorite (from OddsChecker.com at time of writing). He won the Dubai Sheema Classic (G1) and the Juddmonte International (G1), but was a disappointing 4th in the QIPCO Champion Stakes (G1) at Ascot last out. Regular rider David Egan will be in the irons from the outside stall for trainers John and Thady Gosden. In to challenge him include 9-2 second choice Mandaloun, recently declared the 2021 Kentucky Derby (G1) winner after the disqualification of Medina Spirit. He went on to win the Haskell (G1) for his final start as a 3-year-old, and kicked off this year winning the Louisiana Stakes (G3). Regular rider Florent Geroux gets the call for trainer Brad Cox from post 6. T O Keynes is the 7-1 third choice off his Champions Cup (G1) win at Chukyo. Regular rider Kohei Matsuyama will be in the irons out of post 8 for trainer Daisuke Takayanagi.

The post positions were drawn in the usual double-blind manner. TV host Michelle Yu drew the names out of a gold bowl, while that horse's connections drew the numbered eggs from another bowl.

After drawing the outside 14 for Mishriff, co-trainer Thady Gosden said, "Obviously it’s not ideal, but last year he was drawn in 12 before winning so hopefully on Saturday he’ll jump well and get into a good place in the back stretch. It’s a very competitive looking renewal of the race. He comes here in good form and still shows plenty of enthusiasm."

The undercard kicks off with the 3 turf races, starting with the Neom Turf Cup (G3) presented by Jahez for older horses going 2100 meters (about 1 5/16 miles). Jack Sisterson trainee Channel Cat represents the US against Authority and Pyledriver. The 1351 Turf Sprint (G3) presented by stc is contested at 1351 meters (about 6 3/4 furlongs). Godolphin entrant Naval Crown should be favored, with Bill Mott trainee Casa Creed as a 10-1 chance. Closing out the turf action is the longest race on the card, the Longines Red Sea Turf Handicap (G3) at 3000 meters (about 1 7/8 miles). Baron Samedi and Glycon will be favored here. The Arabians take center stage in the Obaiya Arabian Classic over 2000 meters (about 1 1/4 miles), followed by the Jockey Club Local Handicap presented by the Ministry of Culture, featuring local horses going the Saudi Cup trip of 1800 meters (about 1 1/8 miles). The Saudi Derby presented by Al Rajhi Bank is the only age-restricted race, for 3-year-olds going 1600 meters (about 1 mile). Bob Baffert sends in favorite Pinehurst, second in the San Vicente (G2) last out. The penultimate race is the Riyadh Dirt Sprint presented by Saudia over 1200 meters (about 6 furlongs). Breeders' Cup Dirt Mile (G1) runner-up Ginobili was the expected favorite but was scratched on entry day, so Copano Kicking and Switzerland will be favored in a wide-open contest.

Note that unlike in North America and Dubai, the saddlecloth numbers (used for wagering) do NOT correspond with post positions; the horses are numbered in handicap weight order, as is common in Europe and Australia. The Saudi Cup goes off at 12:35PM (all times Eastern), while the first race is the $1 million Neom Turf Cup at 7:45AM. The table to the right has all the post times in Eastern.

The races will be shown live on TVG in the U.S. and HPI-TV in Canada, as well as at racetracks and simulcast sites. In addition, Fox Sports 2 will show the Saudi Cup starting at noon ET. 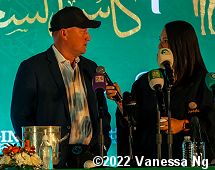 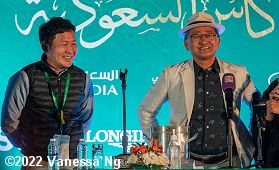 Left: Fourth choice Midnight Bourbon breaks from post 3. Scott Blasi, assistant to trainer Steve Asmussen said, "It’s a good draw for us as he has great tactical speed. The gate situation is a little bit different over here. It’s narrower and hence there is no room for a handler in there. So it’s a little bit different for the American horses. I think our horses are well schooled in the gate and we will school again on Friday. He has won on the lead before but I have no problem with him stalking as well. He’ll be in the race or tracking, right there. Joel [Rosario] has a lot of confidence in him. We’re really excited about him having had a few starts on him as well. We added the blinkers in his last race and they seemed to help him out a bit. Moving forward, we’re in good shape."

Right: Marche Lorraine is the lone distaffer in the field and drew post 13. Trainer Yoshito Yahagi said, "I don’t care about the draw over the one-turn course. When she won the Breeders’ Cup Distaff (around 2 turns), she started from a wide draw, so no problem." 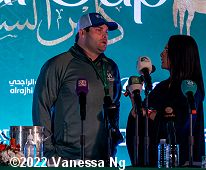 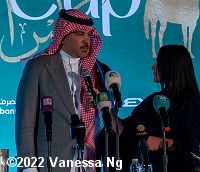 Left: Brad Cox drew the 6 hole for Mandaloun, commenting "The draw in six I’m happy with. He tends to race forward, tracking the leaders, so provided he breaks well, and there is no reason why he won’t, then I expect he will be up with the pace. He’s doing well in his preparation and the draw is good, I’m pretty happy."

Right: Owner Amr Zedan drew post 3 for Country Grammer. Trainer Bob Baffert said, "I would have preferred an outside draw, but it will be a great race and we're happy to have a horse good enough to be there." 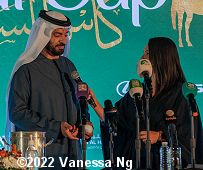