On Saturday, a field of 11 three-year-olds went 1 1/16 miles in the $600,000 Rebel Stakes (G2) at Oaklawn Park, the major local prep for the Arkansas Derby and worth 50 points to the winner in the "Road to the Kentucky Derby". 33,963 fans packed the historic Hot Springs oval enjoying sunny skies and temperatures in the high 70's. Southwest Stakes (G3) winner Super Ninety Nine was sent off as the 6-5 favorite over 7-2 second choice Oxbow, a close fourth in the Risen Star (G2) after winning the LeComte Stakes (G3) at the Fair Grounds. The two-horse entry of Title Contender and Treasury Bill, owned by Gary and Mary West, was the 4-1 third choice on the board. 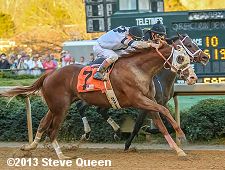 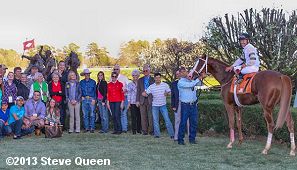 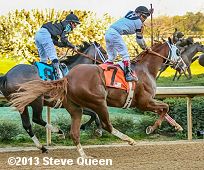 Left: Will Take Charge in the winner's circle. Winning trainer D. Wayne Lukas said, "Will Take Charge is a fair weather horse. He said he didn't feel like running in the rain last time. He had been doing well all week. I was feeling pretty good 100 yards from the wire. The competition was so tough. The hill gets a little steeper from this point."

Right: Jockey Jon Court celebrates aboard Will Take Charge past the finish. Court said, "Wayne  gave me the heads up about how well he had been doing  and he had him tuned up today. The race was executed to plan. It worked out perfectly. I was able to position him where we wanted. He was very professional today." 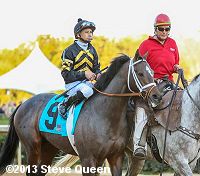 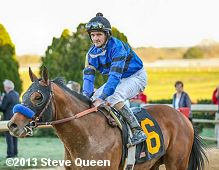 Left: Second place finisher Oxbow in the post parade. Jockey Mike Smith said, "He ran awesome. He was doing things really easy. I didn't want to send him at the quarter pole because I knew it was a bit too early. But, it was the hand that was dealt to us." 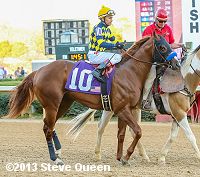 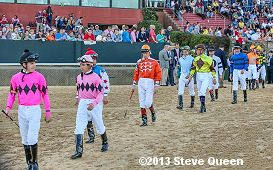 Left: Fifth place finisher and beaten favorite Super Ninety Nine in the post parade. Jockey Rafael Bejarano said, "My horse broke really good. I knew (Title Contender) was going to send and I was able to sit off of him. I was really comfortable in the beginning, but then my horse flattened out after that."

Right: The jockeys head over to the infield saddling area before the Rebel.

Immediately before the Rebel, a short field of 5 older fillies and mares went 1 1/16 miles in the $150,000 Azeri Stakes (G3), the major local prep for the Apple Blossom Handicap. My Miss Aurelia was sent off as the 4-5 favorite off a close third in the La Brea (G1) at Santa Anita. In to challenge her included 9-5 second choice Don't Tell Sophia, winner of three straight including the Bayakoa, 11-2 third choice Songs and Sonnets, making her stakes debut off a 2 race win streak in allowance company, and last year's winner of the Azeri Stakes, Tiz Miz Sue. 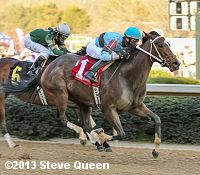 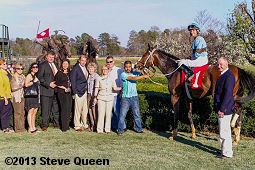 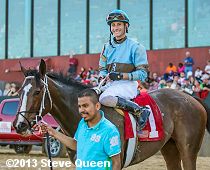 Left: Tiz Miz Sue in the winner's circle after defending her title in the Azeri. Winning trainer Steve Hobby said, "The Apple Blossom is a definite target. She ran against some Grade 1 fillies today. I was really worried when they went 25 early, but she wasn't that far back today. I got really confident at the 1/4 pole because I could see that Joe had a lot of horse. It was just a matter of getting past (Don't Tell Sophia). She has been training great. She did what she's been saying she wanted to do."

Right: Jockey Joe Rocco Jr. celebrates aboard Tiz Miz Sue after the race. Rocco Jr. said, "She was close enough that we didn't have to work to make up ground today. I was confident throughout. She really relaxed for me today and she did it on her own. That was the key today. She's been going up against some heavy heads." 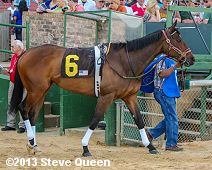 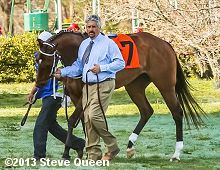 Left: Second place finisher Don't Tell Sophia heads out to the track before the race. Jockey Robby Albarado said, "She ran great. The pace was easier than I thought it would be. It was a pedestrian pace for this kind of filly. I applied a little pressure at the 3/8 pole and all three fillies went together. You can't take anything away from Steve's filly. They both ran hard to the wire."

Right: Third place finisher and beaten favorite My Miss Aurelia in the infield saddling area before the race with trainer Steve Asmussen. She stalked the pace in second under jockey Corey Nakatani but tired late to finish third beaten 5 1/2 lengths. She improved her record to 6 wins, 1 second, and 2 thirds in 9 starts, earning $2,437,000 for owner-breeder Stonestreet Stables and co-owner George Bolton. 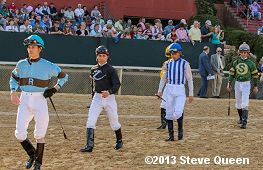 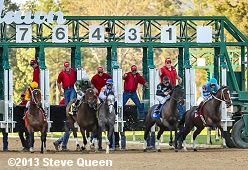 Left: The jockeys head over to the infield saddling area before the Azeri.

Right: The field breaks from the gate for the Azeri Stakes.