Fair Grounds Race Course in New Orleans hosted 6 stakes races on Saturday afternoon for Louisiana Derby Preview Day, including one of the major Triple Crown prep races: the $300,000 Risen Star Stakes (G2), the major local prep for the Louisiana Derby and worth 50 points as part of the Kentucky Derby Championship Series. A field of 12 went to post in this 1 1/16 mile main track feature, with Remsen Stakes (G2) runner-up Normandy Invasion sent off as the 3-2 favorite over 9-2 second choice Oxbow, winner of the Lecomte Stakes (G3), and 5-1 third choice Proud Strike, off his maiden win last out. Earlier rains had downgraded the track to good but the stewards rated it fast in time for the graded stakes, and temperatures were a bit chilly, in the high 50's.

Proud Strike and 7-1 Code West battled for the early lead through fractions of 23.92 and 48.34 while stalked by Oxbow and 9-1 Mylute. On the far turn, Oxbow moved up to gain a short lead through 3/4 in 1:12.74, holding onto the lead to the 1/8 pole. 135-1 Ive Struck a Nerve, last early, came out 6 wide into the stretch, while Code West came through on the inside, and the pair hit the line together. The photo determined that Ive Strike a Nerve prevailed by a nose over Code West in 1:44.52. It was 1/2 a length back to late-running 11-2 fourth choice Palace Malice, who nosed out Oxbow for third money. 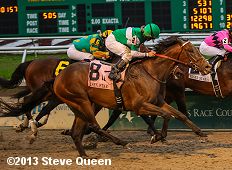 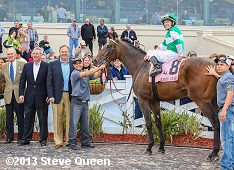 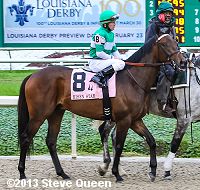 Left: Ive Struck a Nerve in the winner's circle. Winning owner Matt Bryan said, "I called my wife and told her to get fitted for a Derby hat. As long as I live I will re-live this race over and over. We have been waiting for a clean trip and we got it today. Once he got free on the outside we went absolutely crazy." Trainer Keith Desormeaux added, "Every time this horse has gone a distance he's had some kind of trouble. We have talked about it several times, Matt Bryan and I, and we just wanted a clean trip at a distance and if he got beat 14 lengths again we'd quit trying but we have had trouble every trip and James rode him perfectly and obviously he proved what Matt and I knew that he is a nice horse."

Right: Ive Struck a Nerve in the post parade. Jockey James Graham said, "In the mornings he is being really aggressive in his work patterns with company so today and the last race he was aggressive around the first turn. Today, once I got him settled he did everything I asked him to do. He finished off strong. Galloped out good and had a great trip." 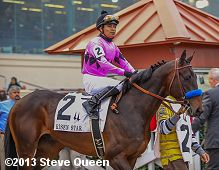 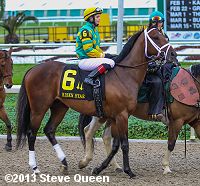 Right: Third place finisher Palace Malice. Jockey Rosie Napravnik said, "He was really not standing great in the gate and maybe got off just a step slow so we lost some position but, having said that, I ended up getting an excellent trip. Was able to save ground when I wanted, I wasn't forced to move early or late, so we got a good trip. He ran a great race and we got beat 1/2 length for everything so for his first race two turns."


The distaff counterpart to the Risen Star is the $200,000 Rachel Alexandra Stakes (G3) (formerly called the Silverbulletday) for 3-year-old fillies also going 1 1/16 miles on the main track. Demoiselle Stakes (G2) winner Unlimited Budget was sent off as the 3-2 favorite in the field of 10 over 2-1 second choice Dancinginthecircle, winner of the By The Light Stakes, and 5-1 third choice Midnight Ballet, fifth in the Hollywood Starlet (G1). Jockey Terry Thompson sent Dancinginthecircle to a clear lead through fractions of 22.88, 46.40, and 1:12.32 while as many as 4 lengths in front of 16-1 Daddy's Song. Entering the stretch, Unlimited Budget, 5th early, easily passed the pacesetter and drew off to win by 3 3/4 lengths over late-running 20-1 Promise Me More in 1:45.38. It was another 4 lengths back to 13-1 Blue Violet third. 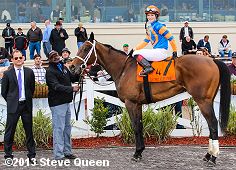 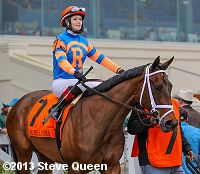 Left: Unlimited Budget in the winner's circle. Whit Beckman, assistant to winning trainer Todd Pletcher said, "She's been a filly that's shown that she could do pretty much whatever she needs to. Preferred the race to be on the lead but with that hot pace in front of her it set up well and showed some versatility, so we were happy."

Right: Unlimited Budget in the post parade. Jockey Rosie Napravnik said, "She was much the best. It ended up being a crazy pace up front so we were a little further back but it set up well for her and she just galloped away with it." 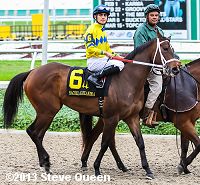 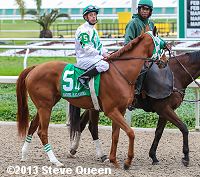 Right: Second place finisher Promise Me More in the post parade. Trainer Wes Hawley said, "Second best but coming on late. We will take that today. I don't think we were going to catch that other filly but 1 1/8 is a different story." Jockey Miguel Mena added, "I had a good trip. I was just in the back of the pack, I had a nice break, saved a lot of ground, and then from the 1/4 pole she made a very nice run."

Left: Third place finisher Blue Violet in the post parade. Trainer Larry Jones said, "This filly's getting better. I had her mother (Gasia) and I'm seeing a very similar pattern but this filly is getting better faster than her mother did and her mother was a Grade 2 horse. Every race is a continued improvement and no race is getting a huge improvement which makes you think there isn't going to be a bounce factor." 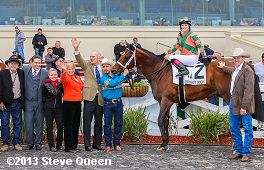 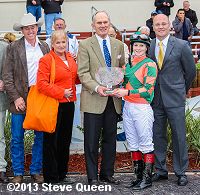 Left: Mark Valeski in the winner's circle. Winning jockey Rosie Napravnik said, "I think everybody had some anxious moments there, including myself. We were really boxed in and I know I was sitting behind a couple of horses that were going to make a run and they just weren't running fast enough, so I was finally was able to tip to the outside and, I mean, he just took off and he was much the best today. He is such a class horse and just a nice horse to be around so I am thankful for Larry and Brereton for having me on today."

Right: Trophy presentation for the Mineshaft Handicap. Winning trainer Larry Jones (in the cowboy hat) said, "Well, you know, we are going to plan to stay here for the New Orleans Handicap. It's a big-dollar race and we are going to have a lot of competition with Graydar and Bourbon Courage coming in. So we are going to get a shot to really see what they got in their hand here." 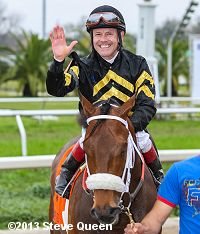 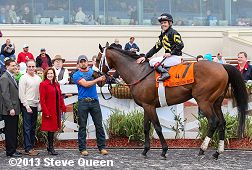 Left: Optimizer in the winner's circle. Winning jockey Jon Court said, "His performance was as top-shelf as it could possibly have been. Compared to last time it was a little more of an eventful trip. We were in and out trying to find the best part of the track."

Right: Optimizer returns after the race. Jockey Jon Court added, "I did venture down on the inside and I got back to the outside; we were trying to find the firmest spot out there and it's all pretty soft. But he handled it well enough to save some ground and make that move towards the lead down on the inside and that put us in the winner's circle." 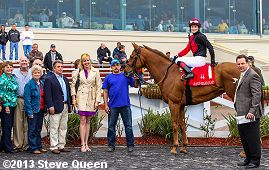 Winning trainer Tom Amoss said, "We weren't going to run if it stayed on the grass. The whole idea was to run if it came off the grass. Daisy Devine is a great filly. Obviously, she is a great turf filly. So, maybe a little vulnerable today on the dirt. We were able to take advantage of it. My filly ran her heart out and, you know, Rosie rode a good race too." Jockey Rosie Napravnik added, "We were able to get a really nice pace from the inside. At the 3/8 pole, Daisy Devine was kind of creeping up on us and I said ‘Oh boy, here she comes' but my filly really stuck it out and kept her nose in front the whole way. It was a very game effort." 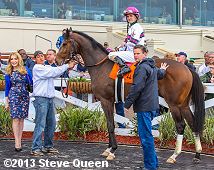 Winning jockey Colby Hernandez said, "I knew there was quite a bit of speed and when they broke they were ripping right along there. When I got around going into the second turn I just eased my hands out a little bit and he just picked it up for me. I smooched at him at the 1/4 pole and he just ran on by." Owner-breeder Evelyn Benoit added, "From day one we felt he was an outstanding horse and Al (Stall, trainer) did a tremendous job getting him ready and teaching him to relax and go get them." Sunbean was an also-eligible for the Risen Star and could have drawn in. Benoit added, "It's not about whether we would have won or lost; it's about showing that Louisiana can put an animal out there that's as competitive as Kentucky or New York and we will do that."