The last two Grade 1 stakes races to be run in New York are traditionally held on Saturday after Thanksgiving. Aqueduct hosted 4 graded stakes as part of their "Heineken Holidayfest" card, highlighted by the $350,000 Cigar Mile Handicap (G1) for older horses going 1 mile around 1 turn. Just 6,363 fans were on hand under cloudy skies and temperatures in the high 40's. Just five went to post with filly Groupie Doll sent off as the even-money favorite, off a 5 race winning streak including the Breeders' Cup Filly and Mare Sprint (G1). In to challenge her included 5-2 second choice Stay Thirsty, second in the Jockey Club Gold Cup (G1), and 5-1 third choice Coil, seventh in the Breeders' Cup Sprint.

7-1 longest shot Buffum battled for the lead with Coil down the backstretch and around the turn through fractions of 23.80, 47.04, and 1:11.11 over the fast track, while stalked by Groupie Doll third. Groupie Doll gained a short lead at the 1/8 pole, but Stay Thirsty, fourth early, moved up to challenge her setting up a duel to the line. Stay Thirsty prevailed by a nose in 1:35.47, and it was another 2 lengths back to Coil third.

It was the final career start for Stay Thirsty who skipped the Breeders' Cup due to owner Mike Repole's boycott of the event. Stay Thirsty finished his career with 5 wins, 5 seconds, and 1 third in 17 starts with total earnings of $1,936,000. The dark bay or brown son of 2006 Champion Three-Year-Old Male Bernardini will stand at Ashford Stud in Kentucky. 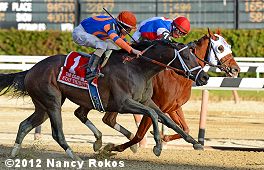 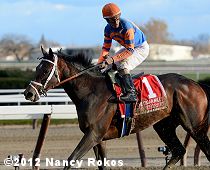 Stay Thirsty returns after the race. Winning owner Mike Repole said, "Aqueduct is not the prettiest place in the world, but it means a lot to me, it means lot to my friends, it means a lot to my family. I grew up 10 minutes from here. I said, 'this is my Breeders' Cup weekend.' I don't care how long I'm in racing, you're not going to win three graded stakes in a row, two with 2-year-olds and one with Stay Thirsty, who means so much to me. This is a special, special bittersweet moment, to go out a winner, beating Groupie Doll, who's going to win the Eclipse Award. He had the lead one time, and it happened to be when the wire came up."

Winning trainer Todd Pletcher said, "It was a very tight photo. I thought we got a good bob, but I still wasn't 100% sure we got there. He was successful at 2 and won races like the Jim Dandy and Travers at 3, and the breeders love milers. He proved today he can be versatile enough to do all of those things. It was a huge win for him. We wanted to be aggressive with him early and put him into the race, and he didn't break real well. With the way it unfolded we were just sitting behind the other three. It seemed to work out in the end, but I was a little concerned at the break because he didn't jump away real well from the one hole." 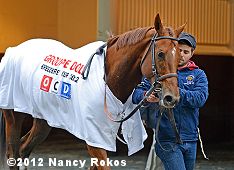 Second place finisher Groupie Doll in the paddock. Owner-trainer Buff Bradley said, "She ran a hell of a race. I'm glad we came. I knew Stay Thirsty was coming at us, he ran a great race, too. I thought she ran her race and ran very well. I'm very proud of her. I knew she'd gotten nosed out. Tough field." Jockey Rajiv Maragh added, "The pace didn't develop fast and I was close. I thought I won the race, just a head bob. The pace was slow. She naturally put herself in the bridle. I got the trip I wanted to. Just a tough beat."


The last Grade 1 race of the 2012 New York racing season is the $350,000 Gazelle Stakes (G1) for three-year-old fillies going 1 1/8 miles on the main track. Belle Cherie Stakes winner Dance Card was sent off as the 8-5 favorite in the field of 7 over 9-5 second choice Book Review, winner of the Imperial Gesture, and 7-2 third choice My Wandy's Girl, off her win in the Pentelis Stakes.

Jockey Ramon Dominguez sent Dance Card to the lead immediately and she set fractions of 23.92, 48.62, and 1:12.67 while stalked by My Wandy's Girl. Entering the stretch, Dance Card began to draw away from the field, getting the mile in 1:37.06. 23-1 Sea Island rallied from last but to no avail as Dance Card cruised to a 4 length victory in 1:50.39. It was just a neck back to My Wandy's Girl third. 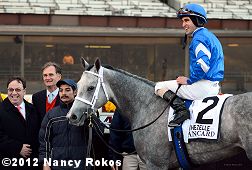 Dance Card in the winner's circle. Winning trainer Kiaran McLaughlin said, "It's not ideal (drifting out in the lane), but as long as they cross the wire first. *Dance Card and Questing) are both Grade 1 winners, so if that's what it takes, we'll take it. It's never felt so good to be for 2 for our last 52. (Going to the lead) was the thing to do. I didn't say anything (to jockey Ramon Dominguez). He wins plenty of races without instruction."

Winning jockey Ramon Dominguez said, "When she drifted out in the stretch, she was just looking around. I'm not worried about it, or complaining about it. She's a beautiful animal with high cruising speed and she can pick it up whenever you ask her. She was perfect through the whole race, and down the lane she wanted to drift out some, but she keeps running. She's special, and I love her." 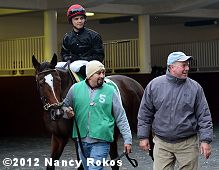 Left: Second place finisher Sea Island in the paddock. The 23-1 shot was last early under jockey Jose Lezcano then rallied late to get second beaten 4 lengths. The Shug McGaughey trainee improved her record to 3 wins, 4 seconds, and 0 thirds in 11 starts, earning $241,400 for owner-breeder Phipps Stable.


The $250,000 Remsen Stakes (G2) featured a field of 10 two-year-olds (9 betting interests) going 1 1/8 miles on the main track. The two-horse Repole Stable entry of Futurity (G2) winner Overanalyze and Champagne (G1) fifth place finisher Micromanage was sent off as the 9-5 favorite over 5-2 second choice Delhomme, a maiden winner last out, and 7-2 third choice Normandy Invasion, also off his maiden victory.

Jockey Javier Castellano sent Delhomme to the lead early and he set fractions of 23.99, 48.07, and 1:12.54 while pressed by Overanalyze the whole way. Delhomme continued to lead to the 1/8 pole, getting the mile in 1:37.45, but Overanalyze passed him at the 1/16 pole. Normandy Invasion, 9th early, put in a strong late rally but Overanalyze held him off in a photo finish in 1:50.13 It was just 3/4 length back to Delhomme third. 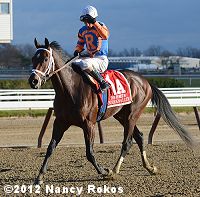 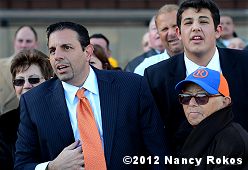 Left: Overanalyze returns after the race. Winning jockey Ramon Dominguez said, "When (Normandy Invasion) came to me, he actually got ahead of me. I wasn't happy about that. My horse was taking sand by that point, but I kept after him and he kept on coming. I was very proud of the way he came back at the other horse. The other horse never stopped running. It was actually my horse doing the comeback. I was very pleased about that. Todd told me to let him run into the turn and to get him into a good spot. He had no problem at all laying second. He was doing it very easily."

Right: Owner Mike Repole celebrates his second of three stakes wins for the day. Repole said, "At the 1/8 pole, I would have said he'd get third place by about 2 lengths. I didn't think he had a shot; the fractions were slow. He's an experienced horse, a very, very gutsy horse. He's won a stake at six furlongs and a stakes at 1 1/8 miles; he's a very nice horse."


Kicking off the stakes action on Cigar Mile day was the $250,000 Demoiselle Stakes (G2) for 2-year-old fillies going 1 1/8 miles. After 3 scratches, only 4 fillies faced the starter with maiden winner Emollient sent off as the 4-5 favorite over even-money second choice Unlimited Budget, a debut winner last out, and 7-1 Giant Cats Eye, a maiden winner in her fourth try. 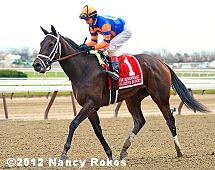 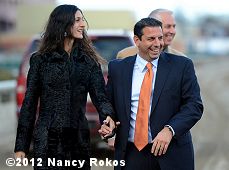 Left: Unlimited Budget returns after the race. Winning trainer Todd Pletcher said, "You're always concerned running back a little quick, but she seemed to bounce out of the race pretty well, physically and mentally. She did everything right, never seemed to turn a hair, and came back with a really good work the other day. We felt it was a calculated risk. For only her second start, it was a big effort. We thought she breezed really well at OBS and has a nice blend of stamina and speed. Very classy filly."

Right: Owner Mike Repole with trainer Todd Pletcher behind him. Repole said, "The quick turnaround was the biggest risk, how is she going to react? Todd worked her last week. She ran a mile, and there are no other 2-year-old or 3-year-old stakes going a distance until February. We'll take her down to Florida and won't race her until February, give her all the time she needs, and get her ready for a nice 3-year-old campaign." 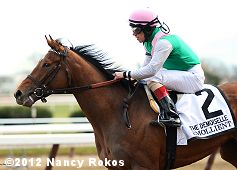 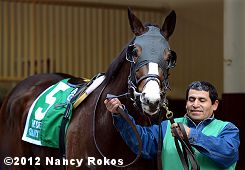 Left: Second place finisher and beaten favorite Emolient returns after the race. The 4-5 favorite pressed the pace in second under jockey Junior Alvarado but could not close, finishing second beaten 1 1/4 lengths. The Bill Mott trainee improved her record to 1 wins and 2 seconds in 3 starts, earning $106,800 for owner-breeder Juddmonte Farms.