The traditional feature at Oaklawn Park on Presidents' Day Monday is the $300,000 Southwest Stakes (G3), a major prep for the Arkansas Derby (G1) and ultimately the Triple Crown. The 25,854 fans braved the chilly 60-degree weather as heavy rain began before the feature race that quickly downgraded the track to sloppy.

A field of 10 three-year-olds contested this 1 1/16 mile trip around the historic Hot Springs oval, with Super Ninety Nine sent off as the even-money choice off his win in an allowance race at Santa Anita. In to challenge him included 7-2 second choice Always in a Tiz, a close third in the Smarty Jones Stakes at Oaklawn last out, and 5-1 third choice Big Lute, off his debut romp by 4 3/4 lengths at Oaklawn.

Jockey Rafael Bejarano sent Super Ninety Nine to the lead first time past the stands and he was allowed an uncontested lead of 1 1/2 lengths setting easy fractions of 23.33, 47.49, and 1:12.29, while chased by Big Lute and Always in a Tiz. On the far turn, Bejarano tapped Super Ninety Nine with his stick and the favorite quickly opened up an 8 length lead over the tiring Big Lute. Super Ninety Nine cruised past the post 11 1/4 lengths in front of late-running 23-1 Fear the Kitten in 1:44.84 over the sloppy, sealed track. It was another 2 1/4 lengths back to 60-1 longest shot Heaven's Runway third. 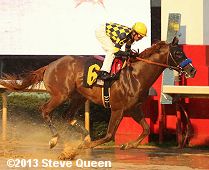 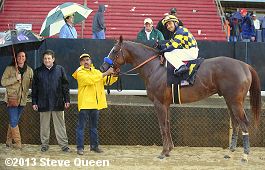 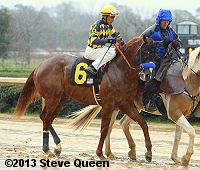 Left: Super Ninety Nine in the winner's circle. Winning trainer Bob Baffert said, "I just told (Bejarano) to let him get away from there and do his thing. The weather conditions weren't really great, but I think my horse is the only one that loved it. Turning for home, I could see he had plenty of horse. It's exciting. This is the time of year when these 3-year-olds start getting exciting. We'll get him back home and see how he does. We know he likes the track now. I don't like to plan ahead and with these young horses, you just never know. We'll definitely have something for the Rebel."

Right: Super Ninety Nine in the rain drenched post parade. Jockey Rafael Bejarano said, "With the way he broke and speed we had, everything went well. There at the end, my horse still had something left." Baffert added, "You're always hoping they'll go two turns, but this horse seems like he can. You look at him, hand he's built like a sprinter. He's a big, strong horse." 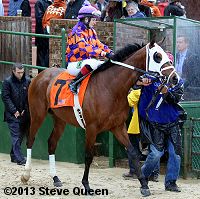 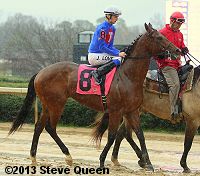 Left: Second place finisher Fear the Kitten heads out for the post parade. The 23-1 shot raced 9th early 8 lengths off the pace under jockey Rosie Napravnik, then passed tiring horses to get second. The Mike Maker trainee improved his record to 2 wins, 1 second, and 1 third in 5 starts, earning $122,870 for owner Frank Irvin.

Right: Third place finisher Heaven's Runway in the post parade. The 60-1 longest shot stalked the pace in 4th under jockey Jareth Loveberry, then passed one horse along the inside to get third beaten 13 1/2 lengths. The Joseph Martin trainee improved his record to 2 wins, 1 second, and 2 thirds, earning $147,748 for owners Kalarikkal and Vilasini Jayaraman. 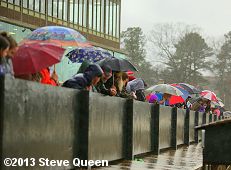 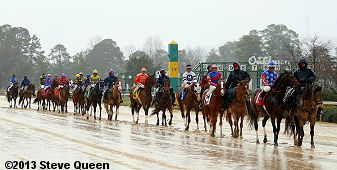 Left: The drenched fans watch the race at Oaklawn.

Right: The post parade for the Southwest in the pouring rain showing all the horses.