2013 "Road to the Derby" Kickoff Day at the Fair Grounds

Fair Grounds Race Course hosted its "Road to the Derby Kickoff" card on Saturday with three stakes races. It was overcast and with temperatures in the mid 60's at the historic New Orleans oval. The highlight of the afternoon was the $200,000 Lecomte Stakes (G3) for 3-year-olds going 1 mile 70 yards on the main track. The race is a points-scoring race in the Road to the Kentucky Derby series, the points used to determine Derby starting spots. Avie's Quality, winner of the Display Stakes last out at Woodbine, was sent off as the 8-5 favorite in the field of 9. In to challenge him included 4-1 Golden Soul, a maiden winner at the Fair Grounds at second asking, and 9-2 third choice Oxbow, a distant fourth in the CashCall Futurity (G1) at Hollywood Park after breaking his maiden at Churchill Downs.

Winning trainer D. Wayne Lukas said, "There is a certain amount of wisdom that he handled the surface well and shipped well, so that gives us another option. You like to see a horse handle the situation that you put him in. We took all the worst of it with shipping in yesterday and taking on your local guys all coming out of their own stalls and having works over the racetrack. So we took all of the worst of it today and still got along pretty good. Now we're a little tighter and in a little better shape if we come back to the Risen Star. This horse has a beautiful stride and a high cruising speed. When you watch the replay you see his ears are pricked and he's just in a cruising speed the whole way around there." 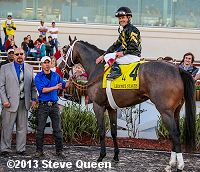 Left: Oxbow in the winner's circle.

Right: Oxbow draws off in the stretch. Winning jockey Jon Court said, "I actually thought I'd be one-two-three, but Wayne said don't be surprised if you find yourself on the lead. He just said to be relaxed and he wanted to see him happy with a smile on in the bit and he can win this race and that's exactly how it turned out. I did see this horse progress from the first time I got to ride him. In fact, the day he won I told Joe Rocco Jr. that this horse has really improved a lot and I wish I could be on his back. I said, ‘You are going to really like him' and he went on to win. As I mentioned, the progression he's made in his training and in his races shows that he's continued to pursue the prestigious levels so we'll see where he goes from here." 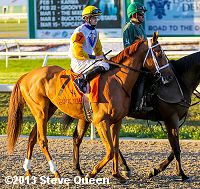 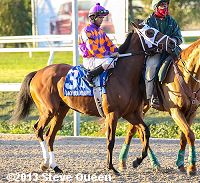 Left: Second place finisher Golden Soul in the post parade. Jockey Brian Hernandez Jr. said, "We were between horses the whole way, although he's one of the rare few that's able to handle being between horses the whole time. When I squeezed on him he picked it up nicely; the winner was just a little more seasoned and a little bit better horse today. We ran a nice second. He finished good and I think the distance will help him. The further they go the better he'll get. And it's only his third start so to step up like he did in the Lecomte, there's no denying he's a good horse."


The distaff counterpart to the Lecomte is the $125,000 Silverbulletday for 3-year-old fillies also going a mile and 70 yards on the main track. Gal About Town was sent off as the 9-5 favorite in the field of 10, off consecutive 2nd place finishes in the Pocahontas (G2) and Golden Rod (G2) both at Churchill Downs. In to challenge her included 7-2 second choice Touch Magic, second in the Delta Princess (G3) last out, and 4-1 third choice Smitten off her maiden win at Fair Grounds in December.

Jockey Iram Diego sent 153-1 longest shot Afrodita to the front and she set an uncontested pace of 24.10 and 48.02 while 2 lengths ahead of 7-1 Finding More. On the far turn Afrodita tired badly allowing Finding More to inherit the lead through 3/4 in 1:13.56. Entering the lane, favorite Gal About Town, who had stalked the pace in 3rd early, moved up to take the lead, opening up by 2 lengths in mid-stretch through 1 mile in 1:40.64. Touch Magic, fourth early, closed late to win by 3/4 length in 1:45.00. It was a length back from Gal About Town to late-running Smitten third.
Results Chart 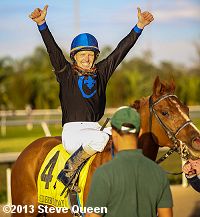 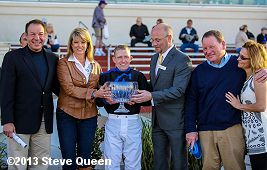 Left: Winning jockey James Graham celebrates as Touch Magic heads to the winner's circle. Graham said, "She did everything right. When I worked her over this track a couple of weeks back she went really well and finished really strong. She did again today. Perfect trip. Finished off and galloped out good."

Right: The trophy presentation. Winning trainer Pat Devereux Jr. said, "She hasn't done anything wrong and she still hasn't. It seemed like the better she settled the better she run and I think there is better in there. I wasn't sure (she could get 1 mile 70). She worked like she would and, you know, that's what you hope. We've had her a month, which isn't a very long time. She came through. We knew who was going to ride her before we got off the van and that's a good feeling too. I'm really happy about that." 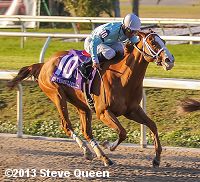 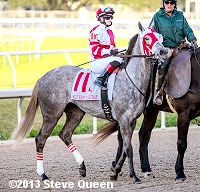 Left: Second place finisher and beaten favorite Gal About Town leads in the stretch. Jockey Jesus Castanon said, "She finished up a little tired. The winner came after me and snuck up on the inside and I think if she would've been a little closer to me and my filly she might've lost the fight. This filly's going forward and there's nothing but good ahead for this filly. She was a lot more relaxed today in the beginning of the race. The first sixteenth she was a little rank but once I took her back she was fine. She gave a good effort."

Right: Third place finisher Smitten in the post parade. Trainer Larry Jones said, "This filly breaks slow so when we drew the 11 I wasn't worried about the post because I knew we'd slide over and save ground. But she's getting it figured out more all the time. Those others were far more precocious than her and this filly had a lot of ground to make up on numbers to get to their level, but we felt like she was showing us improvement and deserved this try. It's a long time before the end of March and the beginning of May." Jockey Rosie Napravnik added, "Just being far back and there were a lot of sprinters in that race and not everyone was moving around the second turn so I had to go around. But my filly really moved forward and she finished really well to get so close." 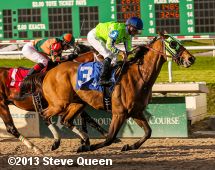 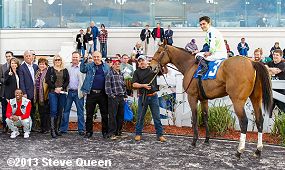 Winning trainer Pauk McGee said, "We thought we'd give him a little time after that race at Churchill and it looks like it worked out good. We gave him two months between races and he was fresh today and ready to go. I think it paid off for us to wait on this race. Now he has won four in a row at four different tracks. He was a good 3-year-old and a better 4-year-old and now he is even better as a 5-year-old but I think some of that is his breeding; Include says he might be a good older horse going long." Owner Mike Zlaket added, "We had bought the mare, gave the foal over to Paul, and you can see from the results he's done a great job. He's very patient and has had him in the right spots. You're looking at half our stable, and the other half is back in the barn. It's an old cliché but you take them one at a time because you just don't know on any given day, but if the horse stays sound and stays at this level we'll be looking for all of the big ones at this distance. I think he likes 1 1/16. He exploded at a one-turn mile. We might very well be back here in a month and if not we'll take a look at something in early March." 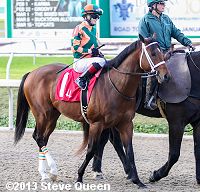 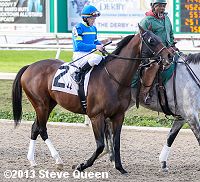 Left: Second place finisher and beaten favorite Mark Valeski in the post parade. Jockey Rosie Napravnik said, "It was a great effort. He's been off for a long time and that's a really nice horse that beat him. This will set him up for his next race very well. He feels great since he's come back. We never really got to test him to see just how good he was last year but we should be able to see this year how far he's able to go because he's in pretty good shape." Trainer Larry Jones added, "It was a great effort on the horse's part, and that other horse just broke the track record at Churchill so you know he's good. It's disappointing to us, yeah, because we wanted to win. Mark coming in second at Fair Grounds? Yeah, I can see that. He's starting to make a habit of this. But it was a great effort first-time out and you could tell he was really tired."