On Saturday, a field of 12 three-year-olds went 1 1/16 miles in the $500,000 Rebel Stakes (G2) at Oaklawn Park, the major local prep for the Arkansas Derby and an important race for graded stakes earnings to make the Kentucky Derby field. 31,882 fans packed the historic Hot Springs oval enjoying sunny skies and temperatures in the high 70's. Breeders' Cup Juvenile Sprint winner Secret Circle was sent off as the even-money choice off his Southwest Stakes (G3) victory last out. In to challenge him included 4-1 second choice Sabercat, winner of his last 3 starts including the Garden State and the Delta Jackpot (G3), and 8-1 third choice Scatman, second to Secret Circle in the Southwest (G3).

Jockey Channing Hill sent 20-1 Unbridled's Note to the front first time past the stands and he got the opening quarter mile in 23.43, before being passed by Scatman on the backstretch. Scatman got the half in 47.09 and 3/4 in 1:11.42 while pressed by 22-1 Cyber Secret and Unbridled's Note, with favorite Secret Circle stalking them fourth. Entering the lane, Scatman began to open up and led by 1 1/2 lengths mid-stretch, but Secret Circle on the outside ran him down, and held off 28-1 Optimizer to win by 3/4 length in 1:44.55 over the fast track. It was another 1 1/2 lengths back to Scatman third. 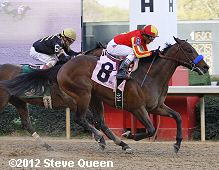 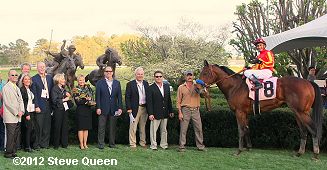 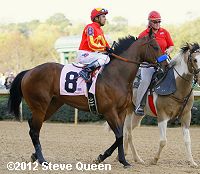 Left: Secret Circle in the winner's circle. Jim Barnes, assistant to trainer Bob Baffert said, "It looks like he will (keep going)," assistant trainer Jim Barnes said. "Bob will decide all that, but we did what we had to today. He got the 1 1/16 and showed he could rate a bit. I'll be getting my room for the Arkansas Derby tomorrow."

Right: Secret Circle in the post parade. Jockey Rafael Bejarano said, "He gave me a big kick. He finished really well. Bob made the right choice to bring this horse back for this kind of race. He was really ready today. The key was getting him to relax. He has lots of talent." 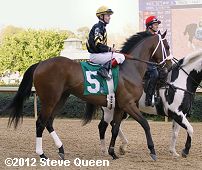 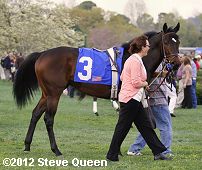 Left: Second place finisher Optimizer in the post parade. Trainer D Wayne Lukas said, "We are real proud. We didn't get beat by much – only about 1/2 length. They only get longer and tougher from here. That's the way it goes." Jockey Jon Court added, "I had to come 4 wide in the final drive. Two more jumps and I think I would have gotten there. I won three races today and I think I would have traded them for this one. I'm not complaining because this horse is really nice."

Right: Third place finisher Scatman in the infield saddling area before the race. Trainer Mike Lauer said, "I'm disappointed. I thought we were right there at the eighth pole, but he just didn't finish. I don't know. He started relaxing a little bit in the stretch and Luis said he did the same thing in his last race. We hope that's something we can work on." Jockey Luis Quinonez added, "My horse tried to pull up on me a little at the 1/16 pole. I was able to get him going again and he ran real smooth. He's been running a mile and I think he was thinking about that. He finished smooth. There were several times I thought we were going to win it. He's a really nice horse." 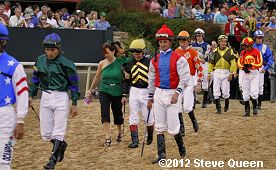 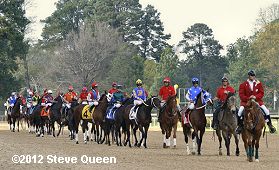 Left: The jockeys head over to the infield saddling area before the Rebel.

Right: The post parade for the Rebel Stakes. Jockey Luis Quinonez aboard Scatman added, "My horse tried to pull up on me a little at the 1/16 pole. I was able to get him going again and he ran real smooth. He's been running a mile and I think he was thinking about that. He finished smooth. There were several times I thought we were going to win it. He's a really nice horse."

An hour before the Rebel, a short field of 5 older fillies and mares went 1 1/16 miles in the $150,000 Azeri Stakes (G3), the major local prep for the Apple Blossom Handicap. Absinthe Minded was sent off as the 9-10 favorite off consecutive wins in the Pippin and Bayakoa Stakes, both over the same course and distance. In to challenge her included 8-5 second choice Joyful Victory, winner of the Tiffany Lass at the Fair Grounds, and 5-1 third choice Ravi's Song, who was second in the Tiffany Lass.

Absinthe Minded and 14-1 longest shot She's All In dueled for the lead over the first 3/4 mile through fractions of 24.09, 47.66, and 1:11.91, with Joyful Victory stalking them in third. The field bunched up at the top of the lane, with just Ravi's Song trailing the pack by 3 1/2 lengths, but in deep stretch, Tiz Miz Sue kicked clear to win by 2 lengths over She's All In in 1:43.58 over the fast track. It was another 1 3/4 lengths back to Joyful Victory third, while favorite Absinthe Minded was fourth. 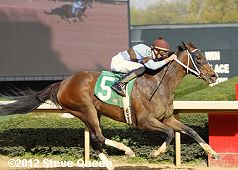 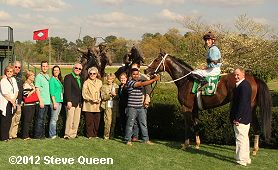 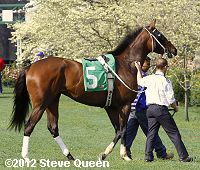 Left: Tiz Miz Sue in the winner's circle. Winning owner Ran Leonard said, "It's a huge victory for her today. She is now a graded stakes winner, which is huge for a small breeding operation. This is a great victory for the whole family. The field we ran against today was a classy group. To get lucky and win is a huge accomplishment for us. I'm going to let Steve decide our next move with her. We will probably nominate to the Apple Blossom, but we will wait and see."

Right: Tiz Miz Sue in the infield saddling area. Trainer Steve Hobby said, "It was overdue for that girl. I was confident the whole trip. I liked that she tucked in behind horses. They hooked up in front, they weren't going crazy, but they were nodding back and forth and taking turns and that had me liking it the whole way. Joe (Rocco Jr.) was able to wait and wait. He is great with her, just so patient. He knows her real well. I guess the Apple Blossom. We will see what (Havre de Grace) does." 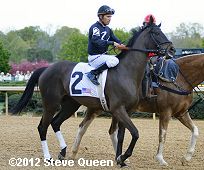 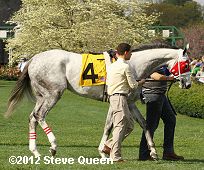 Left: Second place finisher She's All In in the post parade. Jockey Luis Quinonez said, "My instructions were to put her right in the race. She broke sharp and ran hard. We had no problems. We just got out run. No excuses."

Right: Third place finisher Joyful Victory in the infield saddling area before the race. Jockey Robby Albarado said, "I was where I wanted to be behind a couple of speed horses early on. She gave me a little kick, but was no match for the winner today." 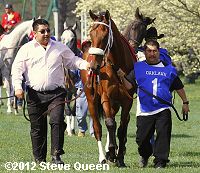 Fourth place finisher and beaten favorite Absinthe Minded heads into the infield sadding area. Jockey Terry Thompson said, "She's been running those fractions so I was feeling pretty confident. When I called on her she just didn't have the punch."