The 107,398 fans in attendance at Pimlico for the Preakness Stakes (G1) were treated to a marathon 13-race card with the first race off at 10:45am. Mostly sunny skies were the order of the day with temperatures in the lower 80's and a light breeze, making for ideal racing conditions over the fast track and good turf, after several days of wet weather. 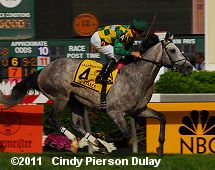 A field of 7 older horses went 1 1/8 miles on the turf in the $200,000 Jagermeister Dixie Stakes (G2). Paddy O'Prado, unraced since finishing 5th in the Breeders' Cup Classic (G1) was sent off as the 3-5 favorite over 9-2 Slew's Answer, winner of the Turf Classic at Tampa Bay last out, and 6-1 Baryshnikov, winner of the Tejano Run at Turfway followed by an allowance at Keeneland. 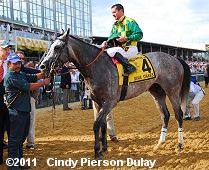 Paddy O'Prado in the winner's circle. His trainer Dale Romans said, "I wasn't comfortable until they hit the wire. He's amazing. It makes no difference – Grade 1 race on Poly, the Classic on dirt, multiple-stakes wins on turf – he's just a phenomenal horse. This is the start of a great year, I hope. The turf condition did concern me a bit. We just wanted him to run his race, relax early and follow Kent's commands and that's what he did." Jockey Kent Desormeaux added, "He started to reach up and find his class from the 3/16ths-pole to the 1/8-pole. Once he gutted that out and got near the horse in front, I found him to be a lot more of a racehorse. He got me home from there. He had to have put on 250 pounds and grown a hand in both directions. He's gotten to be a big boy." 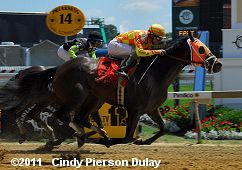 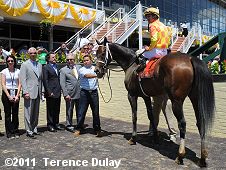 Super Espresso in the winner's circle. Her trainer Todd Pletcher said, "I was very, very pleased and a little disappointed the way (Life at Ten) ran. If you take out her last race on turf, she's been a steadily improving filly. She trained well leading up to this, so we're not shocked that she ran well." Jockey Ramon Dominguez added, "She's got a beautiful long stride on her and I just kept her together. They went quick enough early on where it was helpful, but she just continued coming. I don't feel like they were really collapsing in front of her. She was closing." 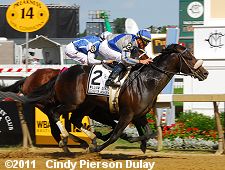 The $100,000 William Donald Schaefer Memorial Stakes (G3) features older horses going 1 1/16 miles on the main track. 2-1 second choice Colizeo led the early going through fraction of 24.38, 48.83, and 1:13.19 over the fast track while being stalked by 6-5 favorite Apart the whole way. In the stretch, Apart gained on the pacesetter and after a short duel, outfinished him by a neck late to win in 1:43.70. It was another 1 1/2 lengths back to late-running 7-2 third choice Icabad Crane third.
Full results chart from DRF 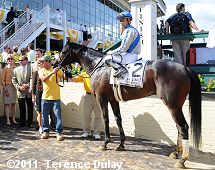 Apart in the winner's circle. His trainer Al Stall Jr. said, "I told Garrett, he's been on the money lately so ride him with confidence. He's sound. I think he'll be a better horse by the end of the year and the farther he goes. This is a good spot. I like where the race sits on the calendar, besides the fun we have in Baltimore." Jockey Garrett Gomez added, "I wanted to sit back a little and just make one run with him. When the pace slowed down a little to my liking, I was able to edge up a little closer to (Colizeo). I always felt I had him within range. When we turned for home, I felt pretty good. I just had to reach down and give him a little love tap to make sure he didn't fall asleep." 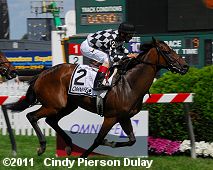 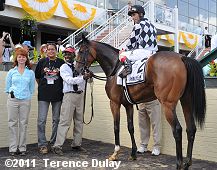 No Explaining in the winner's circle. Her jockey John Velazquez said, "It was a perfect trip. There were a couple of speedy horses in there and I had to bide my time thinking that the good horses are coming from behind anyway. At the quarter pole, I put her in the clear and she put in a good fight. She was much better today than when I rode her last year definitely. She was more professional, more willing to do it and handled the track much better." 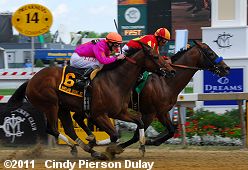 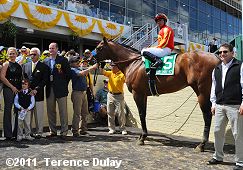 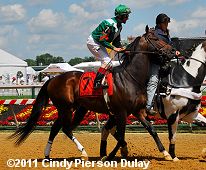 Left: Ventana in the winner's circle. His trainer Bob Baffert said, "California sprinters are pretty tough. I've got to move them around. I thought it would be a good fit for him to come here. He's been working well and there really was nothing in California. I'm trying to spread these horses out. We thought it was a good spot for him and it was. And he ran fast." Jockey Martin Garcia added, "I think the other horse and I were pretty close, but I corrected it right away. It looked like I had contact, but I really didn't. It's been a while since I won on him, so it felt good." 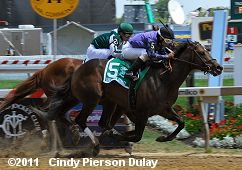 The $100,000 Chick Lang Stakes featured a field of 8 three-year-olds sprinting 6 furlongs on the main track. 9-1 Chipshot battled for the lead with 2-1 favorite Vengeful Wildcat through fractions of 23.44 and 46.26. Entering the stretch, the pair continued to battle but after a prolonged stretch duel Vengeful Wildcat dug in to win by a neck in 1:10.54. It was another 2 lengths back to 4-1 Road Ready third.
Full results chart from DRF 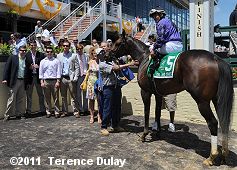 Vengeful Wildcat in the winner's circle. His trainer Ben Perkins Jr. said, "He's a pretty honest little sucker. Carlos fits him well. He knows the horse completely. He broke well and ran well. He's a very tractable horse. It looks like he likes the outside." Jockey Carlos Marquez Jr. added, "This is a horse you can put pretty much anywhere. You can close, but the speed just isn't holding and the inside isn't the best spot. So I tried to put him on the best part of the racetrack. Turning for home, he switched leads. When he put his head in front, I knew it was ours. Each time he gets better and better." 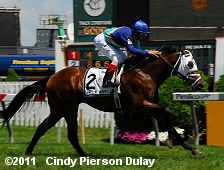 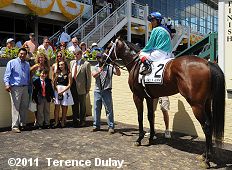 Chinglish in the winner's circle. His trainer Mark Hennig said, "I was concerned about how he'd handle the turf. He seemed to get over it well. I was pretty confident when I saw him going around the first turn, because he was a lot closer than he's been in some races. He'd been a bit of a clown in his early races, but the blinkers helped with that." Jockey John Velazquez added, "He broke good and got good position. He handled it pretty well. When I asked him to go, he responded. It was perfect. I got him in the clear and he clicked in pretty good."