The filly counterpart to the Preakness is the $250,000 Black-Eyed Susan Stakes (G2) held on the Friday before Preakness day. The 27,966 in attendance enjoyed a partly cloudy day with temperatures in the 70's, while the forecasted rains held off all day. A field of just 5 three-year-old fillies went to post in this 1 1/8 mile trip over the main track at Pimlico Race Course in Baltimore, with Royal Delta sent off as the 9-5 favorite off her 3-length win in an allowance event at Keeneland. In to challenge her included 2-1 second choice Wyomia, winner of the Suncoast at Tampa Bay followed by a second in the Ashland (G1) at Keeneland, and 5-2 third choice Hot Summer, winner of the Comely (G3) at Aqueduct.

Jockey Ramon Dominguez sent Hot Summer to the lead first time past the stands and she set fractions of 23.22, 46.26, and 1:10.34 while as many as 2 lengths in front of Wyomia stalking her in second. Entering the stretch, Wyomia tired badly to eventually finish last, while Royal Delta, who raced unhurried in 4th 5 lengths off the pace early, came out for room to take over the lead, opening up a 3 length advantage at the 1/8 pole through 1 mile in 1:36.21. 7-1 Buster's Ready, 3rd early, put in a late rally but Royal Delta cruised under the line 2 1/2 lengths ahead in a time of 1:49.60 over the fast track. It was another 5 1/4 lengths back to pacesetter Hot Summer third. 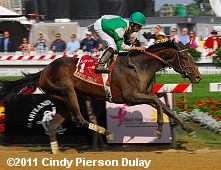 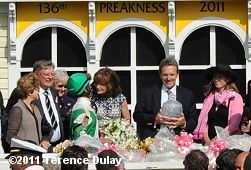 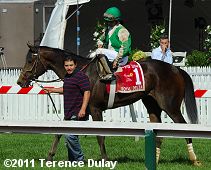 Left: The trophy presentation for the Black Eyed Susan Stakes. Winning trainer Bill Mott said, "We thought she was a nice filly early on, but soon realized she was a little better than we thought. She just keeps improving. Her second race was a little bit of a dud in Tampa. But she's becoming a little more professional. She just keeps coming and coming. We're going to look at the Mother Goose next up in New York."

Right: Royal Delta parades on the turf course before going to the winner's circle. 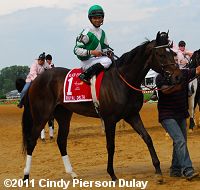 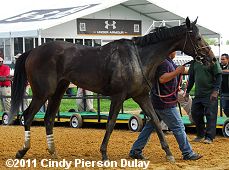 Right: Royal Delta heads back to the barn after the race. Winning jockey Jose Lezcano said, "Today we got pace. She broke good and relaxed. With the pace up front, when I asked her, she gave me the run I needed to go. I was surprised at the pace, and knew we had a good shot. We had plenty." 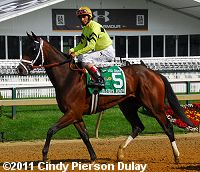 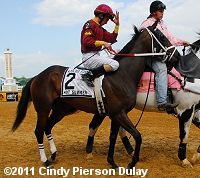 Left: Second place finisher Buster's Ready returns after the race. Her trainer Todd Pletcher said,"I thought our filly ran very well. She was second-best on the day, but tried hard. It was a good effort. We were optimistic that the mile and an eighth would suit her and I think it did. She's a very steady, grinding-type filly and she kept trying right to the end. That other filly got a little bit of a jump on her at the top of the stretch."

Right: Third place finisher Hot Summer in the post parade. Her jockey Ramon Dominguez said, "She was the speed of the race. She went out a little quicker than I wanted to, but that's racing. The last 1/8 mile, she got a little tired and we couldn't hold them off." 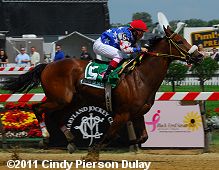 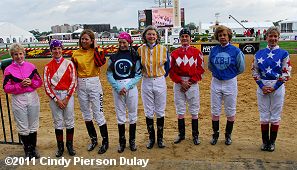 The Legends for the Cure race, a typical $31,000 allowance/optional claimer for older horses going 6 furlongs on the main track, featured 8 retired female jockeys coming back to raise money for Susan G. Komen for the Cure. Left: All the jockeys for the Lady Legends. From left to right, they are Patty "P.J." Cooksey, Abby Fuller, Andrea Seefeldt-Knight, Barbara Jo Rubin, Jennifer Rowland Small, Mary Russ-Tortora, Cheryl White, and, Mary Wiley-Wagner.

Right: Mary Wiley-Wagner wins aboard 5-2 second choice Mass Destruction. She stalked the pace set by Abby Fuller aboard 3-2 favorite Stone in Love, then took over the lead at the 1/8 pole and drew off to win by 6 1/2 lengths. Late-running 8-1 Alicantino with Andrea Seefeldt in the irons checked in third.
Full results chart from DRF 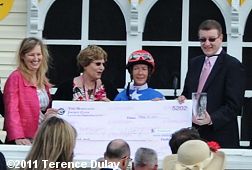 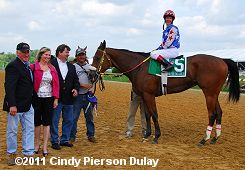 Left: The winner's circle presentation. Wiley-Wagner competed in the race just 18 months after her final chemotherapy treatment for breast cancer. She said, "How did it look? Did it look like I was having fun? Oh, my gosh. This is my passion, and to be able to come back and do it after cancer, damn, it doesn't get any better."

Right: Wiley-Wagner being presented with the check for $33,108.82, the amount wagered to win on Mass Destruction and donated by Pimlico to Susan G. Komen for the Cure. She finished fourth in last year's Legends race aboard the same horse. She added, "They didn't let me win this race last year, and I needed that win. Not to prove anything to anybody else, just to prove to myself that I could do that. I did, I retired again, and here I am. But, no, I'm not planning another comeback." 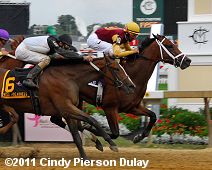 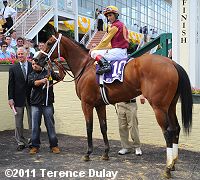 A field of 8 three-year-old fillies sprinted 6 furlongs in the Ms. Preakness Pink Warrior Stakes. 4-5 favorite Final Mesa battled for the lead with 5-1 fourth choice R Holiday Mood through fractions of 23.00 and 46.12. In the stretch, Final Mesa tired after 5/8 in 58.83, allowing R Holiday Mood to inherit the lead, and then she held off late-running 4-1 second choice Strike the Moon by a neck to win in 1:12.12. It was another 3/4 lengths back to 9-2 third choice Bold Affair third.

Her trainer Todd Pletcher said, "Looking at her, I always thought she was a fast filly that would show speed when she stretched out. The only time we sprinted her was on a sloppy track that I don't think she appreciated. I felt good when she broke and put herself in a good position. She gutted it out." Jockey John Velazquez added, "She really surprised me. I didn't think she was going to be that fast. I was going to break a little bit slow and let her come back. What happened is that she broke with (Final Mesa) and I took advantage of that. The other horse was pretty fast and I thought she was the horse to beat. I had to stick with her once she broke like that."
Full results chart from DRF 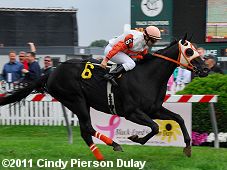 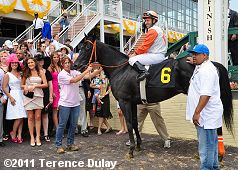 Kicking off the stakes action on Preakness weekend was the $75,000 Jim McKay Turf Sprint with a field of 5 older horses going 5 furlongs on the turf. 4-1 third choice Southern Region led for the first half mile through fractions of 22.81 and 47.00 over the yielding course, while as many as 2 1/2 lengths in front of 6-5 favorite Blue Sailor second. Entering the stretch, Southern Region opened up a 4 length advantage but tired in the final furlong, as 9-5 second choice Ben's Cat closed late to win by 2 lengths over 9-1 Local Celebrity in 59.71. It was another 2 lengths back to 6-1 Super Chunky third.

His trainer King Leatherbury said, "I thought he would win, but that was a special win. He's done that a couple of times when he's fired in the stretch and rolled away. It's beautiful when you see that. It's very thrilling. I was concerned when he last, then next to last, then last. It did not look like he was kicking in. Then he swung him wide in the stretch and he started rolling."
Full results chart from DRF 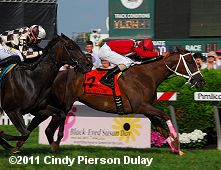 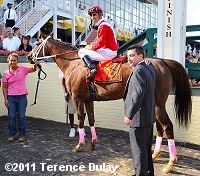 A field of 8 older fillies and mares sprinted 5 furlongs on the turf in the $75,000 The Very One Stakes. 8-1 Threetimesawonder battled for the lead with 28-1 Don'tgetsuspicious through an opening quarter of 22.66 and half in 47.26. In the stretch, the pacesetters tired badly to finish at the tail of the field, as 4-1 third choice Suzzona came out 4 wide from third, opening up a 1 1/2 length lead in mid-stretch, and was all out to hold off late-running 3-1 second choice Supreme by a neck in 1:00.41. It was a long 4 1/4 lengths back to 9-10 favorite Rose Catherine third.

Her jockey Julian Pimentel said, "She loves this distance on the turf. What a nice horse. She's honest, tries hard every time out. She was in a really good spot throughout and finished up great." Trainer Benny Feliciano added, "We took her to Atlantic City to prep her for this race. She always runs good for us. She almost won this race last year. She gives her all in every race she runs."
Full results chart from DRF 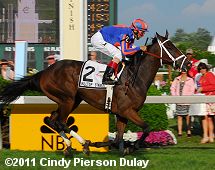 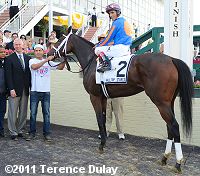 Her trainer Todd Pletcher said, "She's a nice filly. I trained her mother (Path of Thunder) as well, and it's rewarding when you get that second generation. She's a homebred of Mr. Tabor's. I know he always enjoys winning with the homebreds. We had a good trip. The main concern today if you were running on the turf was how they were going to handle the soft ground. Fortunately, she handled it real well."
Full results chart from DRF 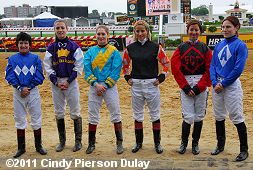 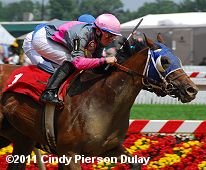 Another feature of the Friday before the Preakness is the $30,000 Pimlico Female Jockey Challenge, with 6 jockeys competing in 4 designated races to score points in a 12-6-4-3 format. Wilson, one of two Canadian jockeys in the contest (Sutherland the other), finished 3rd in the first contest race (among competitors), 2nd in the second race, 1st in the third race (pictured at right), and 2nd in the final race to capture the title and the $10,000 check with 28 points. Maryland-based Forest Boyce was second with 24 points, followed by English jockey Hayley Turner third with 21, Napravnik and Baze tied with 16, and Sutherland with 13. From left to right, the jockeys are: Vicky Baze, Forest Boyce, Rosie Napravnik, Chantal Sutherland, Hayley Turner, and Emma-Jayne Wilson. 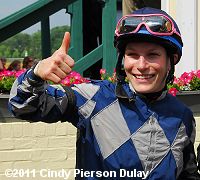 Wilson said, "All my horses got a chance to run, and they all ran big races. I'm excited. It's pretty cool. I like doing things like this, because it puts our game in the limelight. It's good fun. We come out here a lot of times in big money races and everybody's out there to win, and that's what you're supposed to do. Coming out for something like this, I'm out to win, but on top of that it's good to hang out with the riders, not just the girl riders. The pressure's off. To have fun with it and win it, that's classic. Ever since I was a kid, I wanted to be a jock. My parents always used to say, ‘Follow your dreams and give it 110 percent.' They know it's the job that I love, and they know I have a true passion for it. They're a true inspiration for me."

After being presented with the winner's check for $10,000 she promptly donated it to Susan G. Komen for the Cure. She said, "If being part of this gets our game out in the limelight and goes for a good cause, why not? They put up a lot of money for this kind of event, and I really respect them for that. This way I can return the gesture right back to them."