The $1 million Preakness Stakes (G1) is the second jewel in the Triple Crown. A full field of 14 three-year-olds contested this 1 3/16 mile trip around two turns at historic Pimlico Race Course in Baltimore, on a sunny Saturday afternoon with temperatures in the low 80's before an on-track crowd of 107,398.

As expected, Kentucky Derby and Spiral Stakes (G3) winner Animal Kingdom was sent off as the lukewarm 2-1 favorite, as the only horse with a chance at being the first Triple Crown winner since Affirmed in 1978. In to challenge him included 9-2 second choice and Florida Derby (G1) winner Dialed In, off a disappointing 8th place finish in the Derby and eligible for a $5.5 million bonus should he complete the Florida Derby-Preakness double. Completing the top three on the board was 5-1 Mucho Macho Man, off two straight 3rd place finishes in the Louisiana Derby (G2) and the Kentucky Derby.

Jockey Cornelio Velasquez sent 16-1 Flashpoint to the lead first time past the stands, and he set fractions of 22.69, 46.87, and 1:12.01 while being pressed by 13-1 Shackleford to his outside. At the top of the lane, Flashpoint tired badly and faded to finish last, allowing Shackleford to inherit the lead through a mile in 1:37.22. 15-1 Astrology mounded a challenge in mid-stretch to get within a length of Shackleford but he could not sustain his rally inside the 1/16 pole. Favorite Animal Kingdom, well back in the early stages, put in a strong rally late but Shackleford dug in late to hold him off by 1/2 a length for the hard-fought win in a time of 1:56.47 over the fast track. It was another 1 1/4 lengths back to Astrology third. 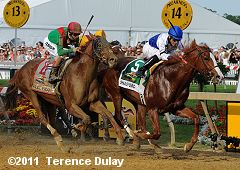 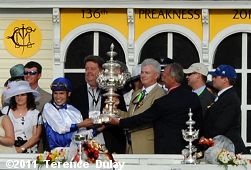 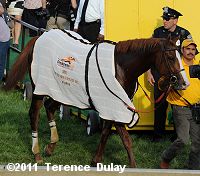 Left: The trophy presentation for the Preakness. Co-owner Bill Cubbedge explained that the horse was named after "Charles Shackleford, the point shaver. Yeah, that is the story. Mike (Lauffer, co-owner) and I like to spend a lot of time on an island in North Carolina called Shackleford Island, and they have wild horses there. It's a good story. We came out this morning and took care of the horses and made sure everything was okay and went to breakfast. We just started to talk about the old days of living at Ellis Park and some of the (claiming) horses. We never thought we could get these kinds of horses. It wasn't even a dream. We just wanted to make a living in the horse business in some way, and it's been phenomenal."

Right: Shackleford heads back to the barn after the race. 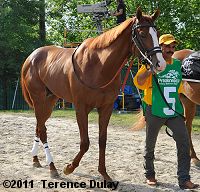 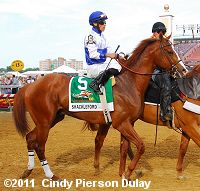 Left: Shackleford in the walk over from the barn before the race. His trainer Dale Romans said, "It's a huge effort. From the time that the horse was born on the farm, the people who foaled him, to the training center, and they brought him to my stable, and all the grooms and exercise riders, and Faustino, and the exercise boys that had him in Florida. He's a super horse. He had a heck of a campaign last year. He never missed a beat. In today's race, that was very rewarding for him off a 6-month layoff for him to come back and run like he did. The turf course was a little soft, but anybody that was out there could tell it was beat up pretty good, and pretty soft. He handled it really well and ran a huge race for the first time off the layoff." 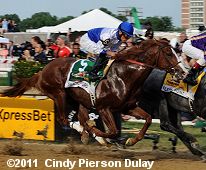 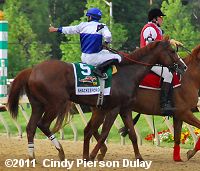 Left: Shackleford runs in second as they go by the first time. His jockey Jesus Castanon said, "It's amazing. He was a little hot in the beginning before in the post parade, but he was able to calm down. He's a good horse and able to handle it. A horse like this can go any kind of speed. I felt somebody coming at the 1/16 pole, I knew that Animal Kingdom was the only horse who was able to come get me."

Right: Shackleford parades for the fans after the Preakness. 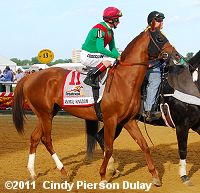 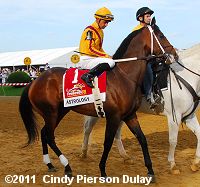 Left: Second place finisher and beaten favorite Animal Kingdom in the post parade. His trainer Graham Motion said, It's tough to come that close, but he ran a huge race. I kind of thought for an instant that he might get there, but I wasn't sure. They ran quick early. That was fine. I think they just slowed it down in the middle of the race and that really helped (Shackleford). I'm thrilled with how (Animal Kingdom) ran. Johnny said it was just a different scenario today because he was that far back that he got a lot of dirt in his face and kind of struggled with it a little bit. I can't believe what Johnny weaved through the last 3/8 of a mile but he was coming. I cannot believe to get that close; I'm not sure what is better, if we were that close or to be beaten further."

Right: Third place finisher Astrology in the post parade. His trainer Steve Asmussen said, "He ran a good race. Hats off to the winner. He entered into the 3-year-old picture a little late this year. Of course, we hoped to win but he competed well and ended up third. He's been playing catch-up all year, and today was a measure of that. We'll evaluate and go from here." Jockey Mike Smith added, "He ran dynamite. He ran great today. I wish I had a better post. I tried to let him stretch his legs a little because he has such a big stride. He ran a great race for me today."