The co-feature on Saturday at Parx Racing near Philadelphia was the $1 million Pennsylvania Derby (G1) for 3-year-olds going 1 1/8 miles on the main track. Conditions were excellent, with sunny skies and temperatures in the high 80's, with the main track fast and the turf good. After expected favorite and Haskell (G1) winner Maximum Security scratched earlier in the week, Improbable was sent off as the 6-5 favorite in the field of 6 off his win in the Shared Belief at Del Mar after finishing 6th in the Preakness (G1). In to challenge him included 8-5 second choice Mr. Money, winner of 4 straight all in Grade 3 company including the West Virginia Derby last out, and 3-1 third choice and Preakness (G1) winner War of Will, off a 5th place finish in the Jim Dandy (G2).

Improbable broke poorly as jockey Gabriel Saez sent Mr. Money to the lead first time by through fractions of 24.50, 49.60, and 1:13.44 while pressed by War of Will and stalked by 7-1 Spun to Run. Turning for home Mr. Money continued to lead through 1 mile in 1:37l.98, but 31-1 Math Wizard, 5th early under new jockey Irad Ortiz, came out to the center of the track and rallied well to get up by a neck in 1:50.94. It was another length back to War of Will third, and a nose more to favorite Improbable fourth. 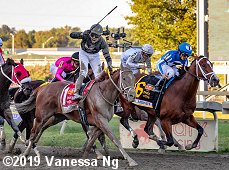 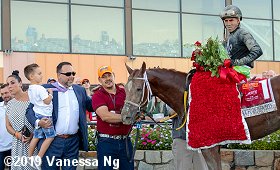 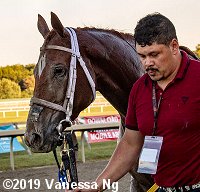 Left: Math Wizard in the winner's circle. Winning trainer Saffie Joseph Jr., celebrating his first Grade 1 winner with his first Grade 1 starter, said, "I've got to retire now! I feel blessed. I'm at a loss for words. John (Fanelli, co-owner), he made a gutsy call. A lot of the credit goes to him. You've got to take chances in life. If you're going to get anywhere you've got to take chances."

Right: Math Wizard heads back to the barn after the race. Winning jockey Irad Ortiz Jr. said, "It was great. I got a perfect trip to be honest. He broke, put me in a good position. I saw the favorite didn't break and I didn't panic. I just said, 'He's going to come from somewhere. He's just not forwardly placed in front of me.' He got through inside of me and from there I just tried to follow him. Then on the backside my horse jumped on the bridle." 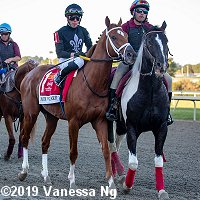 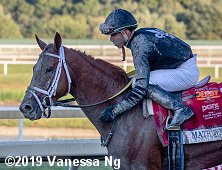 Left: Math Wizard in the post parade. Ortiz added, "When I put my hands down he jumped on the bridle and I said, 'whoa, wait a little longer.' I wanted to wait a little longer and not get inside of Improbable so I just wait, wait, wait and at the half mile I made my way outside of him. He was coming little by little but when he turned for home and he switched leads then he took off. He ran hard. When I turned for home and I opened the reins and he started taking off I said, 'I'm going to get there.'"

Right: Math Wizard returns after the race. Joseph added, "People give racing a bad rap, but this is the greatest game. The only thing I can describe to this feeling is my kids. When I see my kids smile, that's the only thing that compares in life to these horses. That's how good racing is. These horses get so much care. The people work so hard. People who have bad things to say about racing have to come see. A lot of effort goes into it. They get treated better than most humans." 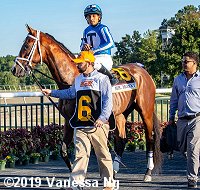 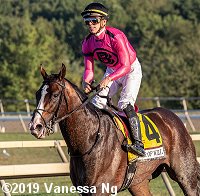 Left: Second place finisher Mr. Money in the paddock. Trainer Bret Calhoun said, "Obviously disappointing and not the way we drew it up. We won four in a row and it's hard to win four in a row. We were hoping today would be the fifth for a million dollars in a Grade 1 but it wasn't meant to be. Kind of surprised to be outrun by a horse we beat pretty handily a couple times. It was his day today and I guess it wasn't ours. We'll regroup. I have no idea where to go from here but we'll figure it out. I don't know that we'd go to California or not for the Breeders' Cup. I'm not sure."

Right: Third place finisher War of Will returns after the race. Jockey Tyler Gaffalione said, "I had a perfect trip, got to the position that I wanted to be in. We relaxed nicely down the backside. When I asked him for run and he went and challenged Mr. Money in front, we just couldn't hold off (Math Wizard) on the outside. He got a little bit tired late but it was a good effort from him." Trainer Mark Casse added, "I thought he ran pretty well, he never gave up. I will talk to (owner Gary Barber) and see what he wants to do. We had a great trip. To me, what was surprising, the pace was not fast and that horse came from out of it." 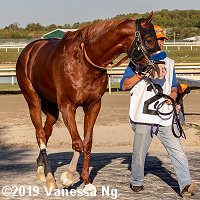 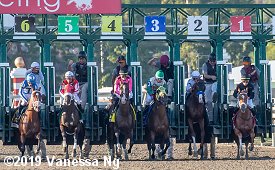 Left: Fourth place finisher and beaten favorite Improbable enters the paddock before the race. Trainer Bob Baffert said, "I don't know why he does it (break poorly). He doesn't do it in California. Mike (Smith) said he was really good and then heard a noise and it set him off. It's just bad luck. It is very frustrating when you go that far and he pulls that stuff. He had been doing really well. He still ran pretty well."

Right: The horses break from the gate for the Pennsylvania Derby.

Kicking off the graded stakes trio on Saturday was the $300,000 Gallant Bob Stakes (G2) for 3-year-olds sprinting 6 furlongs on the main track. King Jack was sent off as the 6-5 favorite off his 2nd place finish in the Shared Belief after winning his first 2 starts. In to challenge him included 2-1 second choice Landeskog off his allowance win after finishing 9th in the Woody Stephens (G2), and 7-2 third choice Trophy Chaser, 2nd in both the Street Sense at Churchill Downs and the Mucho Macho Man at Gulfstream Park.

13-1 Strong Will was quickest out of the chute through an opening quarter of 21.99 before jockey Abel Cedillo moved Landeskog to the front through a half in 44.60 and 5f in 56.62 while pressed by Landeskog and stalked by King Jack. In the stretch, jockey Joel Rosario took King Jack wide for room and easily rallied past Landeskog to win going away by 1 1/2 lengths in 1:08.89. It was a long 12 lengths back to Trophy Chaser third. 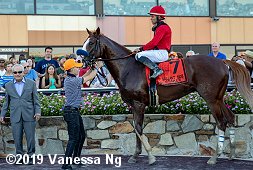 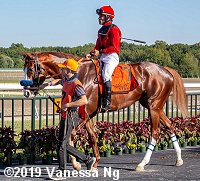 Left: King Jack in the winner's circle. Winning trainer Jerry Hollendorfer said, "I thought Joel had him placed perfectly. They had some trouble in the gate early and we got lucky and got out of that. He had him placed perfectly and had enough horse to run him down. A very fast time. We thought the 7 furlongs would fit this horse very well and it seemed like it did. I like to be up close and we thought we would be up close. Looked like we had a lot of horse down the backside, and that proved to be true."

Right: King Jack in the paddock before the race. Winning jockey Joel Rosario said, "I kind of wanted to just get him in the race and then he could be comfortable, but it seems like he was fine and I just tried to not be too wide on the turn. He was giving me everything nice and he was just enjoying his work. When I started riding he just went forward." 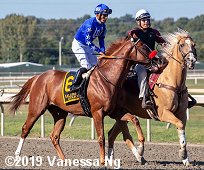 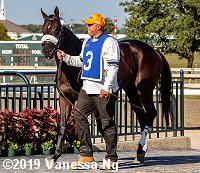 Left: Second place finisher Landeskog in the post parade. Jockey Abel Cedillo said, "He was so fresh he broke really fast. I tried to get him to go a little slower, but as soon as he saw the horse outside he started taking off again, and I was like 'please don't go too fast, but he wouldn't listen. He's the kind of horse that when he feels a horse outside, he just keeps going and going, and that's what happened."

Right: Third place finisher Trophy Chaser in the paddock. Jockey Jose Ortiz said, "He traveled very well. He broke fine and I felt like I had to rush him a bit to be where I was but that's where I thought I had to be to win the race. All the credit to those first two horses."