The richest races on the continent this weekend were run on Saturday at Parx Racing with two $1 million events run at the Bensalem, Pennsylvania oval. Conditions were excellent, with sunny skies and temperatures in the high 80's, with the main track fast and the turf good.

The co-feature race on Saturday was the $1 million Cotillion Stakes (G1), with a field of 11 three-year-old fillies going 1 1/16 miles on the main track, looking for automatic entry into the Breeders' Cup Distaff on November 2 at Santa Anita under the "Win and You're In" Challenge program. As expected Guarana was sent off as the 11-10 favorite, undefeated in 3 starts including the Acorn (G1) and Coaching Club American Oaks (G1). In to challenge her included 3-1 second choice Serengeti Empress, winner of the Kentucky Oaks (G1) but 2nd in both the Acorn (G1) and Test (G1), and 11-2 third choice and Breeders' Cup Juvenile Fillies (G1) winner Jaywalk, winner of the Delaware Oaks (G3) but a close third in the Monmouth Oaks (G3).

Also on the card was the Pennsylvania Derby (G1) won by Math Wizard and the Gallant Bob Stakes. 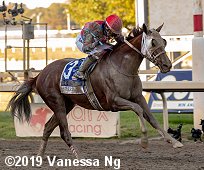 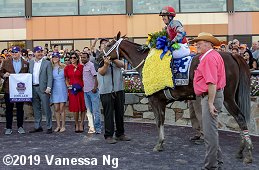 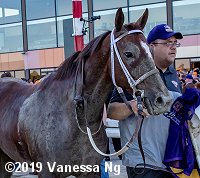 Left: Street Band in the winner's circle. Winning trainer Larry Jones said, "I was very glad to hear (announcer Keith Jones) say very fast quarter because we were way back. We knew there was a lot of speed in here and I was waiting to see those fractions and he called it by the time I could locate her he already said very fast so I said, 'ok, we're still alive.' When she was moving that strong – and I know Sophie doesn't ask that hard that early – and when she was going by horses that fast I thought that when we were heading for home, we were going to be close."

Right: Street Band heads back to the barn after the race. Winning jockey Sophie Doyle, celebrating her first Grade 1 said, "When she broke away from the gate I said, 'you know what, there's so much speed in here, I'm not going to rush her off her feet.' I let her carry me into the race. As we started heading down the backside a couple of us started drifting away. She was traveling comfortably, within herself. I let her creep into the race in her own time. Then when we started to come down the back the inside started opening up. I had so many people tell me, 'don't go near the inside.' So I just let her naturally take me around the outside. When we were coming around the home turn I was like, 'come on girl, let's get into it.' She really exploded for me. She gave me everything she's got." 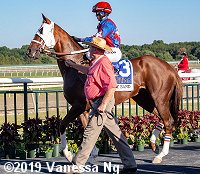 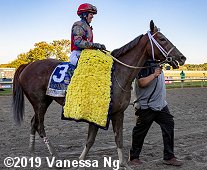 Left: Street Band in the paddock before the race. Jones added, "The biggest thing about this family is that it matures late. I had the whole family and we have not been in a super hurry with her. The only time we really pushed her was at Fair Grounds and see if we could get her ready for the Oaks. And then we could call it the way we would want it and pick our spots … we will see and give her off a little bit to Santa Anita."

Right: Street Band heads to the winner's circle. Doyle added, "When she came upside of Guarana she matched her, she put her head down and she was game on all the way to the wire. She never gave up. She's so tough. What an amazing filly. She's come out here today and really proved how good she is. She deserves to be at these Grade 1 races." 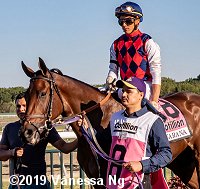 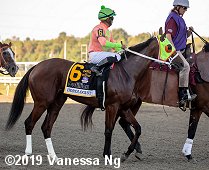 Left: Second place finisher and beaten favorite Guarana in the paddock before the race. Trainer Chad Brown said, I thought she was sitting real nice and she was close to a real honest pace. I can't complain with the trip. We had everyone where we wanted them. She was just second best today. She just won a Grade 1 going two turns so I can't blame that (the distance). Is she best around one? Probably. I can't make any excuse. We gave her a little breather since the Coaching Club and maybe she was a little short as well.

Right: Third place finisher Horologist in the post parade. The John Mazza trainee improved her record to 5 wins, 1 second, and 3 third in 11 starts, earning $378,105 for owner There's a Chance Stable. 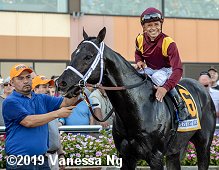 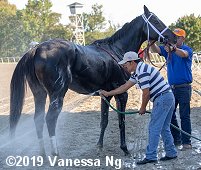 Left: Coal Front heads to the winner's circle. Winning jockey Mike Smith said, "He was very aggressive leaving there. He was OK tracking, he jumped like a rabbit leaving there and I pretty much just stayed out of his way. I was off the rail a little bit. You don't have to be on top of it all the way around there I guess. On days like today it seems like it gets a little fairer. Sometimes it will play an outside bias, but today it seems to be playing both ways, it's all right."

Right: Coal Front gets hosed off after the race. Smith added, "I had horse, he doesn't care to be down in there (inside). He'd probably would have preferred to be out, but I wasn't given that opportunity, so he still ran good."


The $150,000 Turf Amazon Stakes featured a field of 9 older fillies and mares sprinting 5 furlongs on the turf. Miss Gossip was sent off as the 2-1 favorite over 3-1 Change of Control and 4-1 Rocky Policy.

Jockey Wilfredo Garcia sent 56-1 Stetson Gold to the lead through fractions of 22.36 and 44.83 while pressed by 42-1 Wildcat Combat and stalked by Rocky Policy. In the final furlong, Rocky Policy and jockey Paco Lopez wore down Stetson Gold to win by 3/4 length in 56.62. It was another 1/2 length back to 9-2 fourth choice Boos third, and a neck more to favorite Miss Gossip fourth. 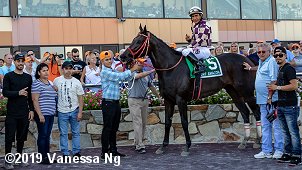 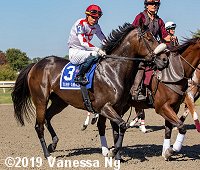 Left: Rocky Policy heads to the winner's circle. Winning jockey Paco Lopez said, "I was worried a little bit (about catching 50-1 pacesetter Stetson Gold). For one moment, no, I did not think I was going to get her. At the end, she stepped up and I had a lot of filly left. She was really coming."

Right: Fourth place finisher and beaten favorite Miss Gossip in the post parade. The Eduardo Caramori trainee has a record of 4 wins, 3 seconds, and 7 thirds in 29 starts, earning $225,944 for owner Go-To-Toga Racing, 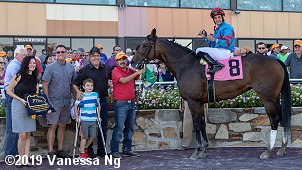 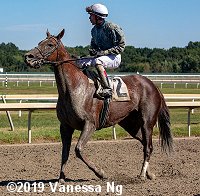 Left: Trace of Grace in the winner's circle. Winning trainer Bernie Houghton said, "One thing about Trace of Grace, she loves this racetrack. She does her best right here at her Philadelphia Park. I was a little worried about my other horse, which was good. She was coming on too, but this one is a little more special. I own this horse, and it's named after my son, so it's special." Jockey Inoel Beato added, "I had a had a real good trip. I didn't think I was going to get caught (in the stretch) because she is very strong. I knew she had a lot left."

Right: Sixth place finisher and beaten favorite Imply returns after the race. Trainer Bernie Houghton added, "I thought all three fillies had a shot. I was a little disappointed at Imply, with a horse like that on the grass, we thought maybe she doesn't like the dirt anymore, but all three came in good to the race."


Kicking off the stakes action was the $100,000 Alphabet Soup Handicap for older Pennsylvania-breds going 1 1/16 miles on the turf. Jockey Frankie Pennington sent 9-1 Smooth B to the lead first time by through fractions of 22.24, 45.45, and 1:09.55 while pressed by 8-1 Papal Law and stalked by 9-2 third choice Saratoga Jack. Turning for home Smooth B and Papal Law tired allowing Saratoga Jack to inherit the front through 1 mile in 1:34.19. 6-5 favorite Pumpkin Rumble, 5th early under Luis Saez, came through late on the rail to win by 1/2 a length in a new course record time of 1:40.21. It was another 2 lengths back to 4-1 second choice Taxable Goods third. 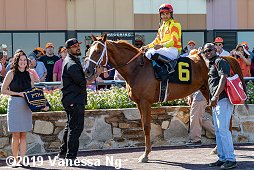 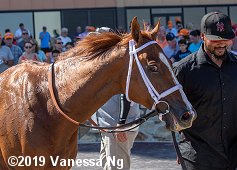 Left: Pumpkin Rumble in the winner's circle. Denton Ebanks, assistant to winning trainer Kevin Attard said, "Beautiful race, we're happy to win. He's a beautiful horse to work with. We came in Friday morning and our expectations were to win. Great ride from Luis."

Right: Pumpkin Rumble heads back to the barn after the race. Winnng jockey Luis Saez said, "It was amazing. We broke perfect and we saved ground. I didn't know where we were going to go because everyone was moving everywhere. We stayed on the rail, and, thank God, we did. He finished strong and I am very happy with how he ran."