Horses with the Breeders' Cup Mile as their target went in the Grade 2 Kelso Breeders' Cup Handicap over a mile on Belmont's Widener turf course, rated as firm. Eight went to post, with Stroll sent off as the 5-2 favorite. 18-1 longshot Christine's Outlaw quickly went to the front out of the gate and battled head-to-head with Stroll through a quarter in 23.45 and a half in 46.11, before dropping out of contention. Stroll inherited the lead, getting 3/4 in 1:09.25 as 32-1 longest shot Gulch Approval joined in the hot pace up front rounding the far turn. The brisk early pace set the race up for the closers, as Stroll tired at the top of the stretch eventually finishing fourth. 5-1 shot Mr O'Brien, who had raced close up in fourth early, came wide around the turn and easily drew clear inside the 70 yard pole to win by 1 1/2 lengths over 7-1 shot Millennium Dragon, who was back in sixth early but finished well through the lane, just getting his nose ahead of Gulch Approval in third. The final time was a brisk 1:32.69. 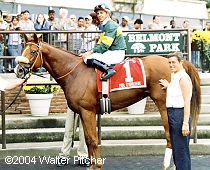 Mr. O'Brien in the winner's circle. His trainer Robin Graham said, "Now that he has learned to relax and kick at the end, he can run any distance from a mile to two miles. He's had some traffic problems in his other races this year, but not today. Eibar (Coa) rode him perfectly. We would have to supplement him to the Breeders' Cup and that is an awful of money. There are a lot of grass races around."

Winning rider Eibar Coa said, "I watched this horse's last five races. He seems like he always has enough to win, but he is always in trouble. My main thing was to keep him out of trouble, even if he got beat, I didn't want that guilt on me. I always had him in position to win. He gave me enough to win the races." 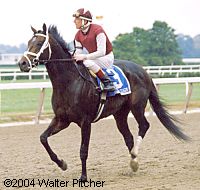 Second place finisher Millennium Dragon returns after the race. His jockey Richard Migliore said, "He ran really good. He got beat by a nice horse. I had to wait for some room, but honestly, I was second best. My horse kicked in hard, but really wasn't cutting into the winner's margin too much." 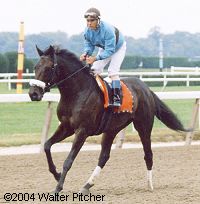 Third place finisher and longest shot on the board Gulch Approval returns after the race.