The best juvenile colts of the east went to post in the Grade 1 Champagne Stakes, a $500,000 event over 1 1/16 miles at Belmont Park. As expected, Afleet Alex was sent off as the 5-4 favorite in the field of eight, with Proud Accolade the 5-2 second choice. 14-1 shot Silver Train and 4-1 third choice Sun King battled on the front end in the early going, with Silver Train leading the pack through a half in 47.20 and 3/4 in 1:11.49 before dropping out of contention. Turning for home, Proud Accolade, who raced close up in fourth out of trouble on the outside, advanced four wide and grabbed the lead by the 3/16 pole. Afleet Alex, who was in sixth early, also went wide into the turn, rallied well, but was left with too much to do, finishing a 1/2 length back of Proud Accolade. It was 1 1/4 lengths back to Sun King in third, and a whopping 11 3/4 lengths back to the rest of the competition. The final time was 1:42.30.

Winning trainer Todd Pletcher said, "The race unfolded pretty much the way we thought it would. He was stalking the pace in a good position. When Johnny called on him, he responded well. The one thing that has been so impressive about him from Day 1 is that he has always had a terrific mind. A lot of horses you get in two-year-old-in-training sales that are fast want to be fast all the time. He's one of those colts that is very cooperative and gives it to you when you ask for it. Assuming he comes out well, we'll go to the Breeders' Cup. " 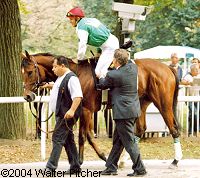 Jeremy Rose gets a leg up on beaten favorite Afleet Alex who finished second. His trainer Tim Ritchey said, "I think he wins if he gets a clean trip. That's what happens in racing. He ran his race. He did a good job. He was catching that horse at the end, so distance wasn't a problem. We found that out for absolute certainty and we go forward from here. They all get beat; Secretariat got beat. I think it was more the traffic that beat him. As for the Breeders' Cup, we'll see how he comes out of the race. Just depends on that." 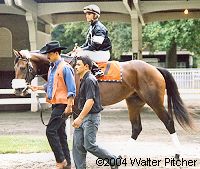 Thid place finisher Sun King in the paddock. His jockey Javier Castellano said, "He ran a very nice race today. I am so happy with the horse. He ran very well for his first time at a mile and a sixteenth. He broke well out of the gate and was doing it easily. But he just got out-finished. The winner had a better post."