On the final day of major Breeders' Cup preps held at Belmont Park, four graded stakes with World Thoroughbred Championship implications were on the card. In the Grade 1 Beldame Stakes, a compact field of just five older fillies and mares went to post. Sent off as the overwhelming 3-10 favorite in the $735,000 event was 5-year-old Sightseek, who trainer Bobby Frankel said would be making her final career start regardless of the result. Also in the field were the 4-year-old Storm Flag Flying at 9-2, and top 3-year-old Society Selection at almost 5-1. As expected, jockey Javier Castellano, replacing the injured Jerry Bailey, sent the favored Sightseek straight to the front for the run down the long chute and backstretch at Belmont. Storm Flag Flying pressed the pace early with Society Selection just in behind her, as Sightseek led the field through fractions of 24.82, 48.40, and 1:12.86. Rounding the one and only turn, John Velazquez asked Storm Flag Flying for an early move, and she came out three wide and got within a 1/2 length of the favorite. However, Castellano had her measured, and upon urging Sightseek, the mare burst clear by 6 lengths with a furlong to go, and easily held off a late run by Society Selection through the lane to win by 2 3/4 lengths in a time of 1:49.60 over the fast main track. It was another 1 1/4 lengths back to Storm Flag Flying in third. With the win, Sightseek retires a perfect 6 for 6 at Belmont Park. 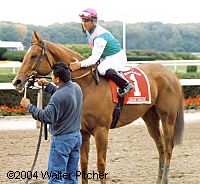 Javier Castellano gives Sightseek a pat after winning the race. He said, "Bobby Frankel made me feel so special -- he gave me the opportunity to ride the filly. He made me feel confident. I know this is probably her last race. I wanted her to win. I really appreciate Bobby Frankel. It went perfect. I never really let her run. This is her last race, and I didn't want to kill her." 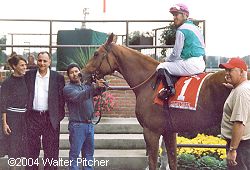 Trainer Bobby Frankel in the winner's circle with Sightseek. He said, "I worried about her. She's going home safely. I wanted her to win and go out on top. I said months ago that this was going to be her last race. The Juddmonte people questioned me about it, but I told them I wanted this to be it. This is definitely the best mare I've trained on dirt. The Eclipse Award is up to the voters. She beat Azeri by 11 lengths and Azeri beat her by a length and a half. I know Azeri is the darling of everybody, but this is a great filly. This was a big purse, $750,000, she ran three weeks ago, and if she were going to run in the Breeders' Cup, it would only be another three week to that. She didn't let me down. She's very sweet. I might send her to the farm next week." 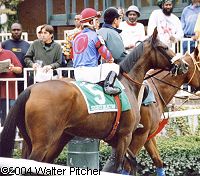 Second place finisher Society Selection in the paddock. Her trainer H. Allen Jerkens said, "We did the best we could under the circumstances. We didn't want to change our filly's running style. He (Cornelio Velasquez) rode her fine. We want to go to the big race (Breeders' Cup Distaff). The owners want to go. She always eats well. If she eats right, we'll leave on the 24th." 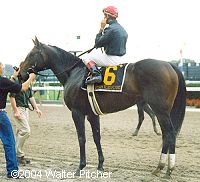 Third place finisher Storm Flag Flying after the race. Her trainer Shug McGaughey said, "It wasn't her kind of race. She had to press and press and press. I thought she ran okay. We'll see how she comes back and talk the Breeders' Cup over. It will be a different kind of race. This could have been tough for her today, coming off two, two-turn races."