Kicking off the festivities Saturday at Belmont was the Grade 1 Frizette Stakes for 2-year-old fillies, also going 1 1/16 miles on the main track for a $500,000 purse. Dubai-bred Balletto was sent off as the 6-5 favorite in the field of eight, with Ready's Gal the 5-2 second choice. Jockey Eibar Coa sent his 10-1 shot Sis City to the front and she battled it out on the pace with another 10-1 shot J P Jewel and 19-1 shot Darn That Girl, through a sizzling quarter of 23.13 and a half in 1:10.77. As the two longshots dropped out of contention, Sis City, who saved ground along the rail, continued with her brisk pace through 3/4 in 1:10.77. Balletto, unhurried early back in seventh along the rail under Corey Nakatani, found room on the inside through the turn, and rallied well down the lane to prevail after a long drive, holding off the late run of Ready's Gal by 3/4 length in a time of 1:43.52. It was another 3/4 length back to pacesetter Sis City, who weaved in and out in deep stretch briefly impeding Ready's Gal. 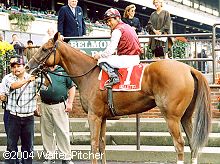 Balletto in the winner's circle. Her trainer Tom Albertrani said, "She usually breaks like that all the time, so that wasn't a concern at all. She's broken slow in every race. Today, she broke how I expected she would and everything worked out that way I hoped it would. I was a little concerned at the half-mile pole, but Corey had plenty of room by the time she was ready to make a run. It looked like Sis City found another gear late. I was just hoping to see Balletto run a big race today. Whatever happens after this, we'll make a decision later on. We have no definite plans at the moment. She's probably the first UAE-bred to win a Grade 1 in the States."

Winning jockey Corey Nakatani said, "She was an old professional. I pointed her in the right direction and saved ground. I moved her back to the inside when (Sis City) ran a little bit green ahead of me. I had to shift her to the inside and kept her busy through the last sixteenth of the race. It showed me that she really has guts." 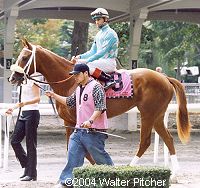 Second place finisher Ready's Gal in the paddock. Her jockey John Velazquez said, "The other horse (Sis City) messed me up. Went all the way out, and then went back in again. The other one (Balletto) got through. My momentum was slowed up. The other one got the jump on me." 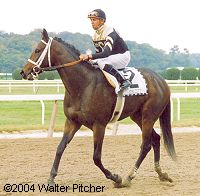 Third place finisher Sis City returns after the race. Her jockey Eibar Coa said, "I think she tried really hard. I think she has a lot of talent. He had her really sharp. She just got beat. She was getting tired. It was just her second time going long. She is still learning."