In the past, the Jockey Club Gold Cup at Belmont Park was the race that determined Horse of the Year. But with the introduction of the Breeders' Cup World Thoroughbred Championships, the Gold Cup has become the major prep for the $4 million Breeders' Cup Classic which now determines the champions. On Saturday, seven of the best older horses went to post in this 1 1/4 mile event over the main track, gunning for a gross purse of $1 million. Sent off as the 5-2 favorite was the lone 3-year-old in the field, Love of Money, off his 8 length win in the Pennsylvania Derby with fan favorite and local hero Funny Cide the 3-1 second choice off his second-place finish in the Saratoga Breeders' Cup Handicap last time out.

When the gate opened under dark skies and a shower of rain, Love of Money went to the front and was joined by Funny Cide and 20-1 longshot Newfoundland, as the trop battled on the pace through decent fractions of 24.01, 47.65, and 1:11.62. Love of Money succumbed to the heated battle with his elders after seven furlongs, eventually finishing sixth. Newfoundland inherited the lead after a mile in 1:36.44, as 7-2 shot The Cliff's Edge, who had rated back in last earlier, put in his bid for the front and briefly joined the battle in mid stretch. Newfoundland held a very short lead with a furlong to go, but Funny Cide, who looked to be tiring at the top of the stretch, found another gear and wore down Newfoundland in the final strides to prevail by 3/4 length in a time of 2:02.44 over the fast main track. It was just a length back from Newfoundland to The Cliff's Edge in third.

Jackson Knowlton, managing partner of ownership group Sackatoga Stable said, "We were wondering what was going on. He was dropping back a little bit, but he's done that before. He went through some traffic, got bumped around a little bit and really dug in. That was a great effort. Barclay (Tagg) has him honed; that's probably the best he's ever been and he showed it today. He has no quit in him. He doesn't always win, but he's always there. This is 17 out of 20 on the board and there aren't a lot of horses that do that. It's a great victory.

Asked about the Breeders' Cup, Knowlton added, "As long as he comes out of the race well, we're on to Texas and that's all we could ask for. The two classic wins, nothing can compare to the Derby and obviously the Preakness was huge. This is obviously number three. For me, personally, and probably for or whole group, there have been an awful lot of people to knock this horse, but he still beat some good horses. Maybe he'll be fifth or sixth-favorite in the Breeders' Cup, but anybody who takes him too lightly is making a mistake. He's just tenacious, he has no quit in him and he's always going to be in the race with his natural speed. We're so proud of him. I can't give enough credit to Barclay, Robin and Jose." 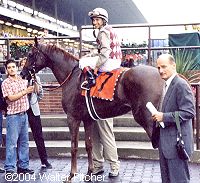 Winning trainer Barclay Tagg in the winner's circle with Funny Cide. He said, "I was concerned when he dropped back, but I felt much better when he started coming back. He's always shown to be a game horse, and he showed it here today. He never gives up. He always comes back running, even in some of his worst races. Even when he's been headed before, he's always come back strongly. This means a lot to me. This is a very, very big race."

Asked if he was going on to Lone Star Park for the Breeders' Cup, he said, "I felt that if he won the Jockey Club Gold Cup, it would give him another shot in the Breeders' Cup Classic. If he didn't win, we weren't going to send him because he had already been beaten enough this year."

Winning jockey Jose Santos said, "I didn't want Love of Money to get away with an easy lead. I knew Funny Cide had the speed, so I pushed him a little bit coming out of the gate. Love of Money tried to slow the pace down, and then fell back. That's when I decided to take the lead again. After the :47 half, I felt more comfortable with this horse because I know him well. Unfortunately, I couldn't ride him last time because I broke my arm. Even with half of an arm, I was still able to win with him. I let him go, hit him a couple of times and he took off. He won like a champion" 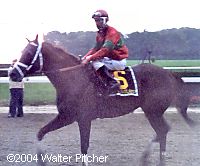 Second place finisher Newfoundland and Edgar Prado return after the race. His trainer Todd Pletcher said, "I'm happy we took a shot. He's a little quirky like I said. When he's in the clear, he's a much better horse. I would say he ran awfully close to his Suburban (beaten a neck by Peace Rules on July 3). I'll talk to the owners (about going to the Breeders' Cup Classic). Based on this race and the Suburban, you could make a case and take a shot."

Jockey Edgar Prado added, "The boss (Pletcher) said don't take anything away that comes easy. He took me to the lead. He fought hard, and I thought it was a great race from him." 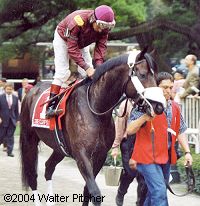 Third place finisher The Cliff's Edge in the paddock. His trainer Nick Zito said, "I'm glad Funny Cide won, but unfortunately, we didn't. I think we ran a good race, but he actually never runs a bad race. He is usually always there, and it is interesting because it was actually a lot closer than it looked. It could have gone either way for a while down the stretch. But I'm happy." Update - it was found out after the race that The Cliff's Edge fractured and ankle in the race and he has been retired. The injury is not life threatening and he will go to stud next year.

His jockey Gary Stevens added, "He ran a super race. I thought I was the winner coming down the stretch. Funny Cide is tough and ran a gallant race. Nick and I discussed saving ground and circle them. I wished I would have stayed in a little longer around the far turn and saved some ground. I lost a lot of ground and got beat." 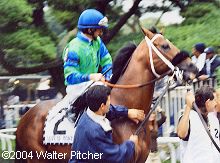 Beaten Favorite Love of Money in the paddock. His trainer Richard Dutrow Jr. said, "Right now, I am very disappointed. I don't know what to think. Maybe I will start thinking about it later on. I just don't know why he ran the way he did at the end. So, it's going to be a tough thing to figure out what we'll do next. You know, I really expected him to win today."

Jockey Robby Albarado added, "He did everything I thought he was going to do at the start. He got left alone long enough so that I had every chance to win the race. He just didn't have enough. I don't know why."