The Grade 1 Joe Hirsch Turf Classic, renamed this year to honor the legendary Daily Racing Form turf writer, featured a field of seven top turf horses facing 1 1/2 miles of the Widener Turf Course for the winner's share of the $750,000 purse and a ticket to the Breeders' Cup Turf at Lone Star Park. Sent off as the favorite, as expected, was 3-2 choice Magistretti, with 3-year-old Kitten's Joy the 5-2 second choice in his first start against older horses and his first trip over twelve furlongs. A steady rain soaked the course, downgrading it to a yielding condition.

When the gate opened, 23-1 longest shot Maktub went to the front under Jorge Chavez, and he battled on the pace along the hedge with 4-1 third choice Kicken Kris and favored Magistretti through six furlongs in 1:17.25 and a mile in 1:42.65. Kicken Kris succumbed to the speed duel and dropped out of contention, eventually finishing sixth. Despite the slow pace, the battle up front set the race up for the closers. Magistretti briefly had the lead after 1 1/4 miles in 2:07.31, as Kitten's Joy and 9-1 shot Tycoon went wide around the turn in their bids for the front. At the top of the stretch, jockey John Velazquez asked Kitten's Joy for run and got it, as the 3-year-old accelerated right by Magistretti to win by 2 1/2 widening lengths in a respectable time of 2:29.97 over the wet surface. It was 3/4 lengths back from the tiring Magistretti to the onrushing Tycoon in third.

Winning trainer Dale Romans said, "He's special. He was dominant today. He impresses me more and more every race. What amazed me about him is his turn of foot, acceleration and how kind he is during the race. When you ask him, he just turns it on. This is the best race he's run so far. I thought he would relish a mile and a half, and he showed that he did today. Kicken Kris and Magistretti were a little bit out of their game, being so close. But I didn't think the slow pace would bother us."

Asked about his Breeders' Cup plans, Romans said, "We're going to train right into Lone Star (for the Breeders' Cup Turf). We're looking to go out there two weeks ahead of time with both horses (stablemate is Whitney winner Roses in May, expected to enter the Classic). I want them to get familiar with the surrounding and work over the track once. I think you can make a strong case for (Kitten's Joy) to be 3-year-old champion. He's beaten older horses, while Smarty Jones didn't. And Birdstone hasn't, unless he wins he Breeders' Cup Classic." 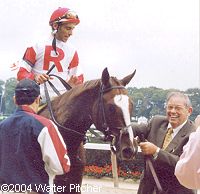 Kitten's Joy and Velazquez head for the winner's circle. Velazquez said, "It worked out beautifully. I couldn't have asked for anything better. When I hit him, he was like, `Whoa!' and just took off. It was pretty easy. I wish every horse could be like him. I think Dale (Romans) has done a great job with him and I'm glad to be part of it. He was going so well, I was confident the whole time." 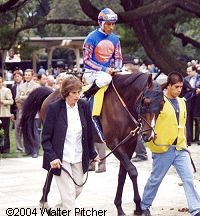 Beaten favorite and second place finisher Magistretti. His trainer Patrick Biancone said, "It's too early to think about the Breeders' Cup. This was a good race for him. It was a much better field than the last time he ran. We know he'll run in the Breeders' Cup, but maybe not this year. My horse would need to improve a lot in the next three weeks if he wanted to beat the top one. If he does, we'll go. If he doesn't, we won't."

Jockey Edgar Prado added, "I rode him well. I thought we could get away from Kitten's Joy and be able to kick " 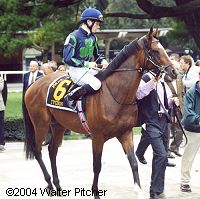 Third place finisher Tycoon in the paddock. His jockey Jamie Spencer said, "He ran a good race. We could have done with a stronger pace. That's why I moved closer, because I knew it was going to be a sprint. He would've preferred a harder course, but what are you going to do? This horse is still learning. He's still a baby. He's only had nine races."

T.J. Comerford, assistant to trainer Aidan O'Brien said, "It was his first time out here and he'll improve again. He'll improve a lot off this run. I don't know if Aidan (O'Brien) is going to look at the Breeders' Cup but if he runs back in this country, he'll improve."